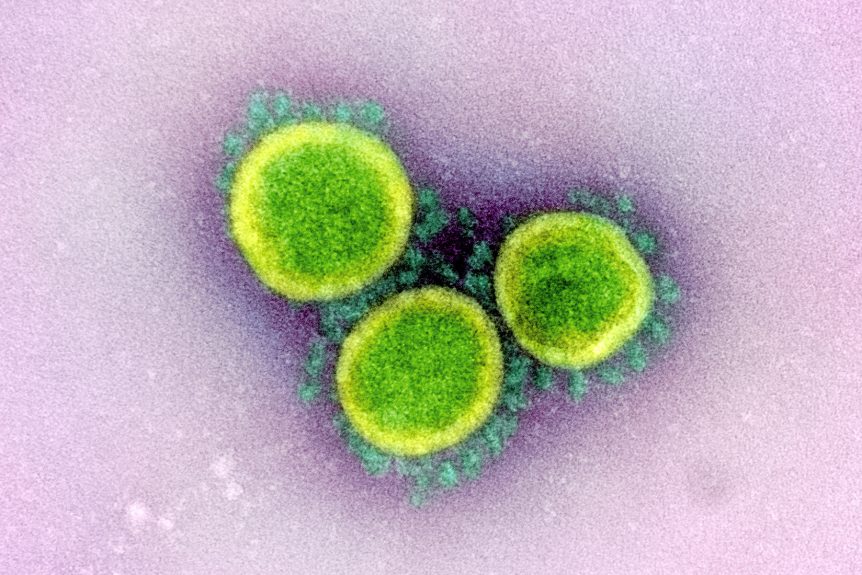 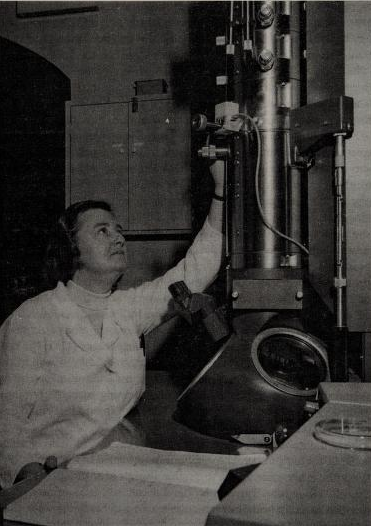 Over half a century ago, Scottish virologist June Almeida pioneered viral imaging and diagnosis. In 1966, she used an electron microscope to identify the first known human coronavirus. Source: Wikimedia Commons

In 1931, veterinarians reported a new respiratory infection with a particularly high mortality rate—40 to 90 percent—in domesticated chickens in North Dakota. Diseases caused by similar pathogens would be documented in mice and pigs in the following decade. Indeed, all belonged to the same family of viruses — humans just didn’t know it yet.

The 1960s saw the discovery of two new strains of the common cold, which American and British virologists isolated and studied. Electron microscopy imaging confirmed that these virus particles were similar in shape, size, and structure to those found in animals decades before. Their striking, club-shaped spikes, which appeared crown-like under 2D microscopic study, prompted scientists to choose a family name: coronavirus.

Of course, SARS-CoV-2, the novel strain responsible for the 2019 coronavirus disease (COVID-19) pandemic, has quickly turned “coronavirus” into a household name. But while most of us are just now beginning to learn the history, science, and language surrounding coronaviruses, scientists have come to understand quite a bit about this family in the years since its discovery. The varied effects of the new pathogen have only begun to be elucidated, but understanding its morphology as similar to several others allows us to frame its sudden prevalence within a broader history. Classifying it is a helpful first step in demystifying the fact of the virus, even if we cannot yet predict its behavior and must still reckon with the diverse and dire consequences of the disease it produces.

Decades ago, as virologists traced connections between strains of the common cold and types of respiratory infections found in animals, it became clear that human coronaviruses are zoonotic in origin. In other words, they result from infections transmittable from animals to humans. And even before the current pandemic, the likelihood of contracting a human coronavirus — of which there are now seven — at least once in a lifetime was high. 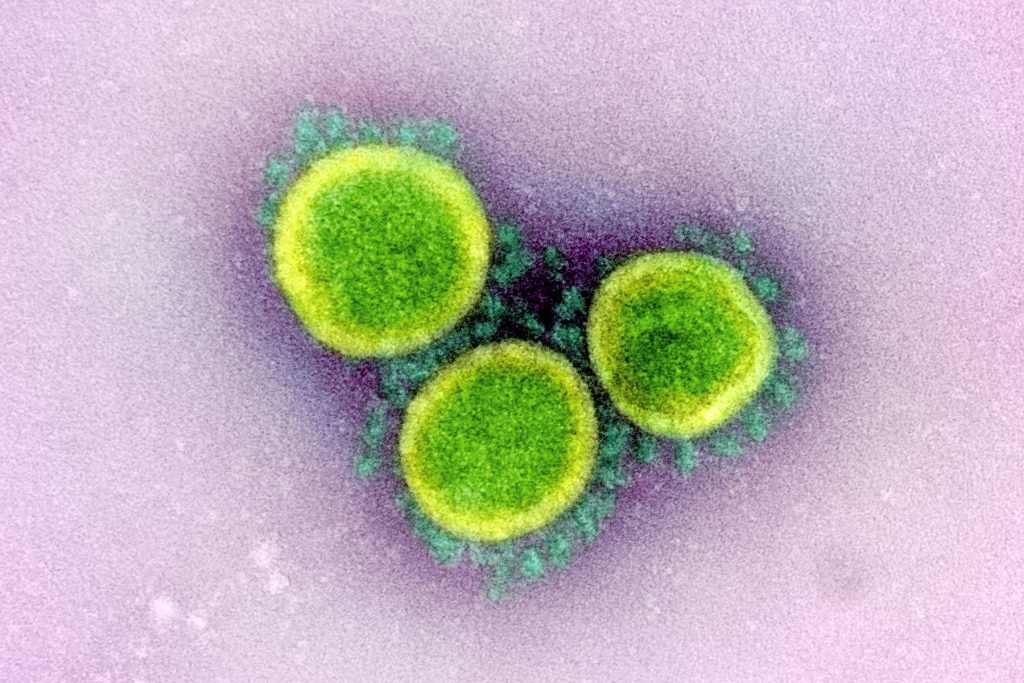 Coronavirus particles under an electron microscope appear to have halos or crowns. Their name is derived from the Latin word for crown: corona. Source: National Institute of Allergy and Infectious Diseases

In fact, the majority of human coronaviruses have long circulated the globe without ever garnering the unified attention of millions. In most cases, they cause mild symptoms similar to the common cold or flu. But SARS-CoV-2 joins a small class of coronaviruses that pose far more serious threats to human health: SARS-CoV, first discovered in 2002, and MERS-CoV, in 2012. It is particularly troubling that the three deadliest coronaviruses have emerged in close succession over the still-early course of the twenty-first century. This trend begs a universal question: why?

While quite a few gaps remain in the origin story of the COVID-19 outbreak, those of severe acute respiratory syndrome (SARS) and Middle East respiratory syndrome (MERS) may provide some clarity. The details of SARS’ beginnings in late 2002 now sound rather familiar: a disease with pneumonia-like symptoms mysteriously appeared in southeastern China, afflicting thousands and triggering a global emergency. While SARS emerged in Asia and MERS likely first infected humans through an animal source on the Arabian Peninsula, genetic research suggests that both viruses originated in bats before spreading to an intermediary transmitter and then to humans. The Centers for Disease Control and Prevention has suggested that bats may be the original source of the current coronavirus outbreak, too. 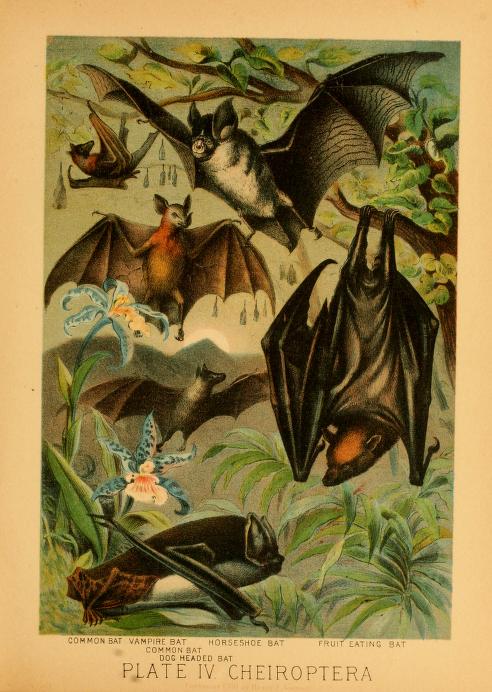 Illustrated here in an 1897 volume on the animal kingdom, bats are now known for incubating the world’s deadliest coronaviruses. Source: Smithsonian Library

To be clear, a wide variety of birds and mammals can harbor coronaviruses — but most of those viruses have not made the zoonotic jump to humans. The answer to why deadly human coronaviruses are emerging more frequently may lie in the collision between bat biology and human industry. The only mammal capable of sustained flight, bats undertake a tremendous amount of physical activity and boast very powerful, specialized immune systems. As they take to the skies, bats generate body temperatures akin to fevers in humans and accumulate pathogens from the various places they visit. Consequently, many of the pathogens harbored in bats have evolved to withstand raised body temperatures, or febrile reactions—mechanisms in humans and other mammals designed to trigger our immune systems and weaken the viruses that infect us. And in order to evade bats’ particularly high-functioning immune systems, viruses also tend to mutate more quickly in these flying mammals than they do in other host animals.

From our perspective on the ground, these features make bats exceptional incubators of deadly viruses. But people, too, have a role to play in the increased frequency of outbreaks. Human industry has propelled our species into places it once left alone — people have encroached upon habitats in unprecedented ways and with unprecedented consequences. Disruption and damage to environments often force the animals that inhabit them into closer contact with humans, causing distress. Bats are no exception. When under great stress, they tend to shed saliva and other bodily fluids more readily—if they host a virus, they will naturally shed that too. In 2013 and 2019 respectively, prescient journal articles from Science Magazine and Viruses warned of increasing threats of zoonotic spillover from bat coronaviruses in China, specifically.

But we should be careful not to assign blame to Chinese or east Asiatic people at large, and rebuke those who call the virus causing COVID-19 the “Chinese Virus.” In the wake of most pandemics comes a tide of racism, and, as we have seen recently, a rise in hate crimes. These moments of societal upheaval compel some to search for and foist blame onto a scapegoat  rather than actually grapple with the causes and consequences of something as intangible to our eyes and minds as an infectious disease.

We now play a long waiting game: one which will likely only end decisively with the advent of a vaccine to protect against COVID-19. When it comes to coronaviruses, this would be an unprecedented feat. To the almost immeasurable benefit of the broader public, scientists have developed vaccines for a variety of infectious diseases, but there exists no vaccine for any known coronavirus. Coronaviruses infect and take hold in a rather unique setting: mucosal tissue that lines the upper respiratory tract.  We can think of this surface as the boundary between the respiratory tract and the external world. These types of surface infections, however, don’t elicit the same vigorous systemic immune responses as do infections in other, deeper parts of the body.  For the purposes of immunization, an effective vaccine will need to generate a robust and reliable immune response that counteracts coronavirus at its site of infection—the lining of the respiratory tract—something that can be especially difficult to achieve. 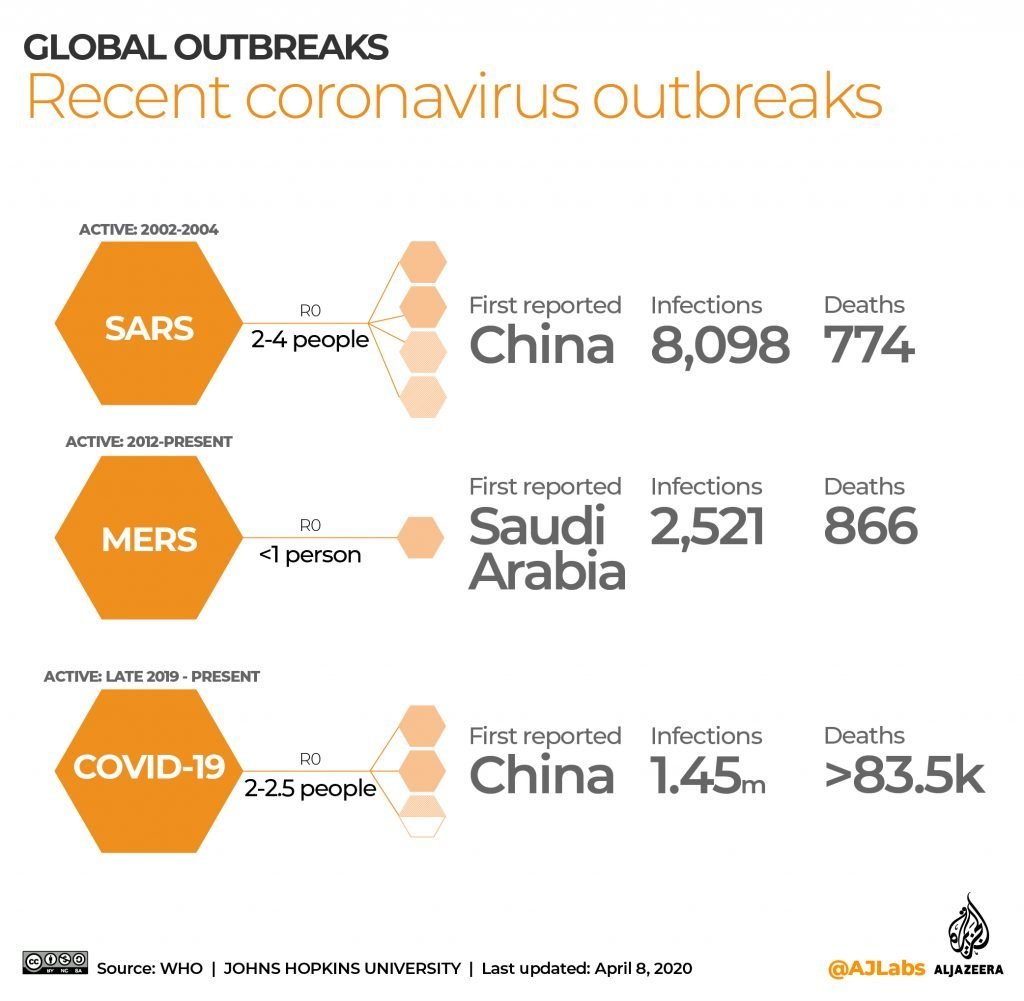 An at-a-glance comparison of SARS, MERS, and COVID-19 from April 2020. In the intervening weeks, COVID-19’s total numbers of infections and deaths have more than tripled: approximately 4.5 million have been infected, and over 300,000 have died. Source: Al Jazeera and World Health Organization

Moreover, a coronavirus vaccine largely hasn’t been necessary until now. As deadly as SARS was, killing approximately 1 in 10 of those afflicted, it was not highly contagious and transmission tapered off before the fatality count could reach 1,000. No cases have been documented since 2004. MERS has yet to be entirely eradicated and maintains an even higher fatality rate — estimated at 35% — but is also characterized by a low infection rate and the total number of deaths currently hovers below 1,000. The virus causing COVID-19 is the first coronavirus to be both lethal and contagious enough to impel the development of a vaccine. In the absence of a vaccine, some advocate building herd immunity by allowing the virus to spread through the vast majority of populations until most living people are immune and the threat of contagion becomes minimal. But given that millions might die in the process, and those casualties would be skewed toward marginalized groups. In this case, a coronavirus vaccine may be the only practical way out of the pandemic.

Fortunately, compared to most other coronaviruses, SARS-CoV-2 is relatively stable: it does not appear to mutate easily or often. This is good news for the effectiveness of its eventual vaccine and the scientists working tirelessly to generate it. But as we wait, we might do well to remember what it is we’re waiting for, who it is we’re waiting on, and how we arrived here in the first place.