The videogame industry is ever-evolving and ever-growing. With each passing day, a new game enters into existence and while another is seemingly forgotten. The industry has changed drastically over the years, yet it has also kept the same spirit for over 60 years. One thing that has stayed the same through all these years? A lack of transparency about the development of new games and hardware. This secrecy serves to protect companies and their products from being pirated or stolen by competitors. As a result of this understandable practice, we do not know what is going on being closed doors—including what companies are keeping and what they are throwing away.

Videogame Preservation: What We Know

Last year we got a rare glimpse into the inner workings of Nintendo when three gigabytes of data were leaked online. The leak showed us that Nintendo does preserve a significant part of their history and clearly documents all of their games, even unreleased titles. The data resolved age-old speculation that Mario’s brother, Luigi, was meant to appear in Super Mario 64 (he was) and revealed code for unreleased games. The leak, while exciting, raised crucial questions about security and legality. Many Nintendo fans worried about the company’s response to the leak. Nintendo has a copyright policy that it strictly enforces. Some fans felt that the leak would cause Nintendo to tighten up their security and become even more vigilant about protecting their assets. The leak had revealed that, unlike other companies, Nintendo did not destroy old games and systems, something that fans and preservationists have feared for so long. Many in the videogame community felt that the leak provided a huge opportunity and called for Nintendo to make older data available, perhaps in a museum.

When it comes to videogames, one of the best preservation methods is emulation. Emulation allows people to upload or download videogame ROM data, enabling them to play the game without a console or a physical copy of the game itself. Emulating a game, while a great method for preservationists, does have some major drawbacks. First and foremost, emulation is almost always illegal. If the company is still operating and the game is still under copyright, emulating the game is considered illegal in the company’s eyes. Nintendo has taken several websites that host emulators or ROMs to court. The second issue with emulators is that you do lose something when you emulate a game rather than playing it as it was originally intended. But when you simply cannot find functioning videogame consoles, controllers, memory cards, and wires, an emulator is your best option. Even if you have all of the components working perfectly, when you go to plug that game into your television set, the experience still lacks something, because older games were intended to be played on older televisions. In fact, some avid gamers buy vintage television sets for older games simply because it looks and feels better.

March 10 is lovingly called Mario Day by many videogame fans because “MAR10” resembles “MARIO.” As a result, March is Mario Month for Nintendo. This March was going to be a big year for Mario as he and Nintendo celebrated his 35th anniversary. To mark the occasion, in September 2020 Nintendo announced the release and re-release of several Mario videogames. The new games met rave reviews, but some lamented the fact that the re-released games would only be available until March 31, 2021. Furthermore, Nintendo announced that it would no longer host Super Mario Maker (SMM) and its companion website on its server. In response, many long-time fans and course creators came together for one last hurrah and created final levels to say goodbye to the game.

While it might not seem like a big deal that Nintendo stopped hosting services for one game, the implications are considerable. Nintendo released SMM in 2015 for its 3DS and Wii-U consoles. The game allowed players to create their own courses to play locally or upload them to the internet for other users to download and play.

The typical Mario game has 77 levels or more. Older games have fewer levels because the technology did not have the capacity to hold as many levels as newer games do. SMM, on the other hand, saw the creation of over 7.2 million courses over the span of the game’s lifetime. It would take a single player more than 14 years to play all the levels in the game, Nintendo announced from its official Twitter account. 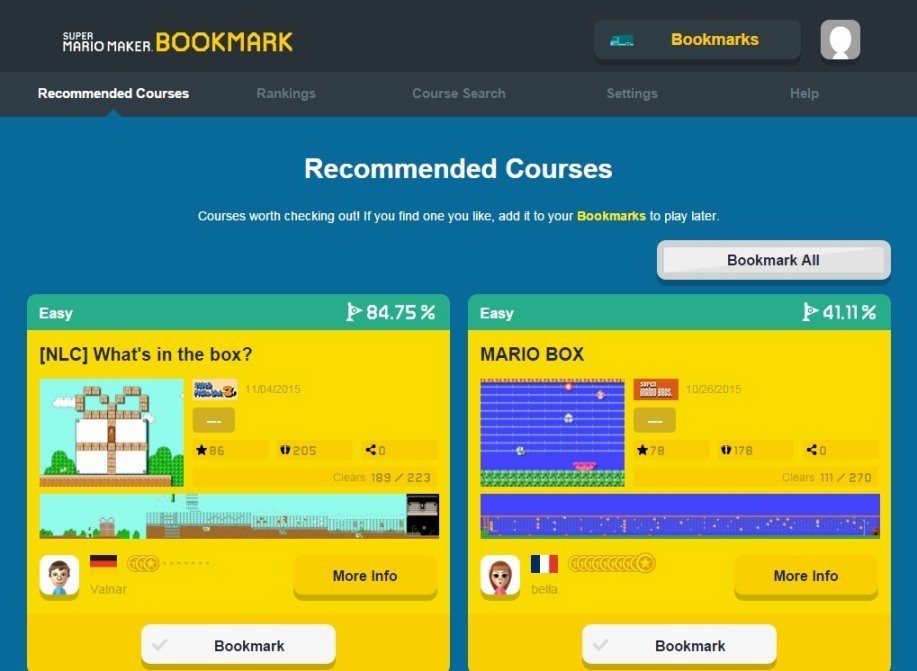 That’s what Mario fans stood to lose when Nintendo announced that it would no longer host the game—and the millions of user-created levels—or the companion Super Mario Maker Bookmark website. Super Mario Maker Bookmark (SMMB) automatically created a new page for every single level uploaded to the SMM servers. Each webpage detailed the level’s name, its difficulty, its clearance percentage, along with who has played it, liked it, and shared it. There is also some information on who cleared it first and what the world record for each level. Overall, the SMMB pages created a lot of metadata for users.

By removing both SMM and SMMB from its servers, Nintendo has essentially wiped out all of this content—at least publicly. You can still play SMM, but you cannot upload or download courses. You can still access the SMMB on the Internet Archive’s Wayback Machine, but it is an incomplete record. As we have seen, Nintendo does keep a decent record of its creations, but it is unknown (and probably unlikely) that the company would retain all information for over 7.2 million courses in its data banks.

This is not the first time SMM has been dealt a blow like this. When the game first released, it had a function that allowed players to utilize another Nintendo property, Miiverse, and leave different messages on the various levels. Miiverse was a free add-on to the Nintendo network where users created their own avatar (Mii) to use as a social media account devoted to Nintendo. The incorporation of Miiverse in SMM allowed for players to comment as they played the level itself and once they completed it. In their comments, players could leave helpful tips and hints on how to beat the level. Nintendo did away with Miiverse in 2017 and with it, all of the SMM comments. Many of these comments have been lost completely, but some preservationists took the time to upload portions to the Wayback Machine.

SMM may still be playable, but it is a shadow of its former self. But a key question remains: how would someone preserve this game? Emulating it would simply save the user’s game file, not the entirety of the SMM content. Saving SMM would be a difficult task, especially if Nintendo truly did delete everything related to it. 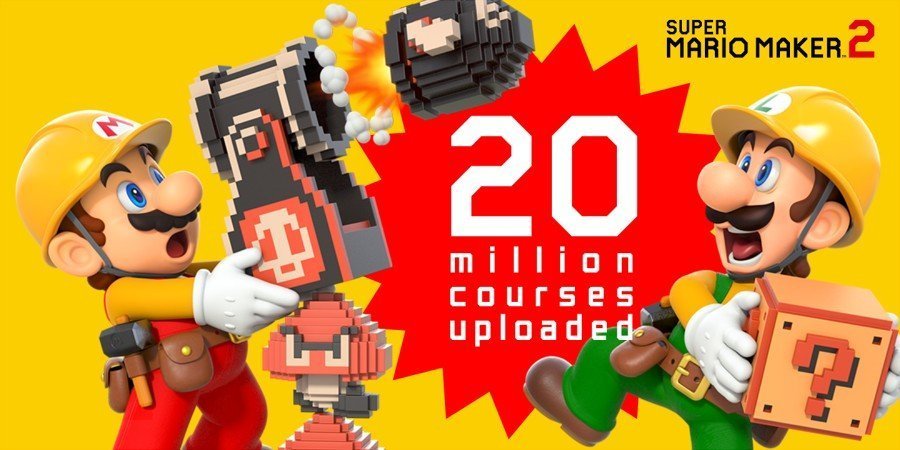 Part of Super Mario Maker’s downfall was the release of its sequel, Super Mario Maker 2. The sequel was met with just as much fanfare as the first one, if not even more as it expanded on some elements of the first game while discontinuing others. SMM2 allows creators to build their own Worlds, which is akin to other Mario games where every world has levels built in it. As of September 2020, SMM2 boasted over 20 million user-generated levels, according to Nintendo’s official Twitter account. This means that when the time comes for us to say goodbye to SMM2, we will see an even greater loss of content. It is unknown when this sad event may occur, but SMM2 definitely has a few more years in its lifetime. Hopefully, by then there will be an efficient way to save it.

In the meantime, some players have set about clearing as many SMM and SMM 2 levels as possible. This may have started out of respect for all content creators, or perhaps from a completionist urge—the desire to complete every challenge and earn all possible achievements or trophies. Part of the data published alongside a course shows what percentage of the people who play the level beat it. As long as a level remains unbeaten, that metric remains at 0.00%. The SMM group created spreadsheets and a community Discord (voice and text chat platform) to keep track of which levels had and had not been beaten. Some people in this community even posted videos of themselves beating levels on YouTube. Eventually, their mission came to the attention of some well-known YouTubers—such as DGR Dave and GrandPooBear—who then joined in the effort.

These recordings are a form of preservation. While they do not preserve the game in a traditional sense, these videos nevertheless create a record of the existence of user-generated SMM2 levels and show a play-through of them. On top of that, many of these videos show the reactions of players, so it even gives the added benefit of what playing the level is actually like and captures moments of frustration or joy. At some point in time, these videos and play-throughs will be used as evidence of the culture of the 2010s-2020s, but they will also be a formative part of our zeitgeist due to their sheer volume. For the moment, however, they are keeping aspects of the SMM franchise alive.

HAI’s Reel History explores the real Halloween
Creating a Corporate Anniversary Exhibit for HAI
How to Make the Most Out of Your Company’s Anniversary
The World Was Wide Enough: Hamilton and the Growing World of Historical Musicals