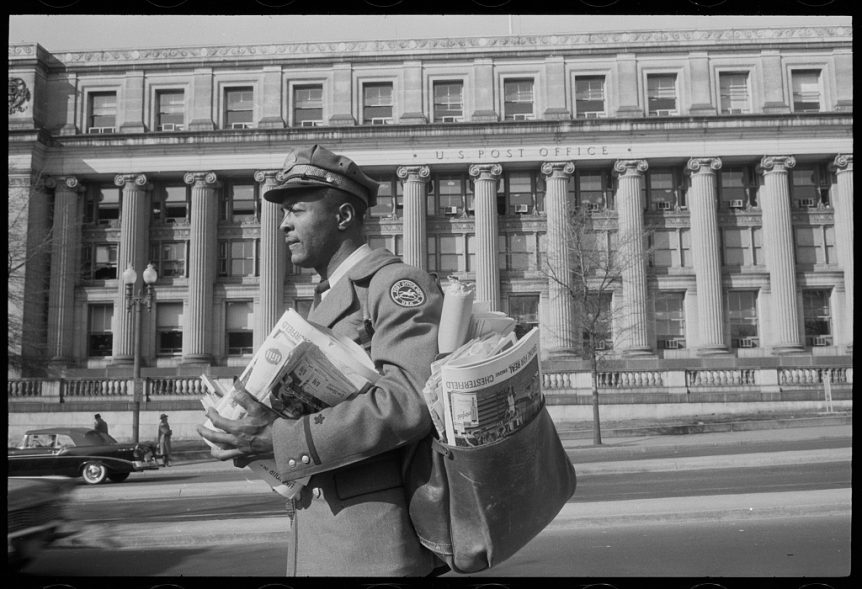 This is the second part of our exploration of the history of the United States Postal Service. You can read part one, which looks at the Postal Service’s early years, here.

The Great Depression and World War II created new challenges for the Postal Service. As unemployment rates soared in the 1930s, mail volume plummeted as Americans sent less mail to save postage. World War II posed the opposite problem, as the Postal Service faced the daunting task of coordinating the delivery of thousands of letters to and from service members stationed around the world. 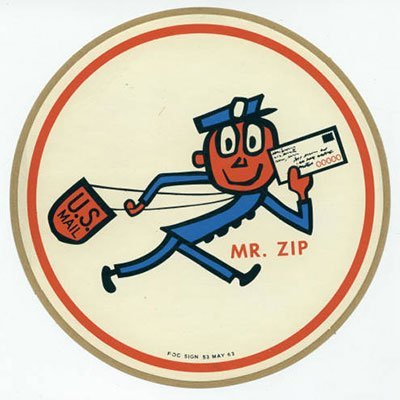 The postwar economic boom prompted the Postal Service to introduce the “zip code” system in the 1960s. This five-digit number was a way to better organize the ever-growing volumes of mail that the Postal Service had to handle. In this massive undertaking, the Postal Service not only had to create a system that could apply to the entire country but also run an effective marketing campaign to win over skeptical Americans. Some critics charged that the new system was too complex, and would further bog down the Postal Service. Others alleged that it was a communist plot designed to use dehumanize the American public by reducing them to a series of numbers. Despite these objections, the Postal Service,  with the help of a cartoon mascot named Mr. Zip, eventually won over the public.

While some Americans worried that the Postal Service was embarking on communist plots, the Federal government worried that foreign communists were using the mail to distribute propaganda. In the Postal Service and Federal Employees Salary Act of 1962, Congress required post offices to hold any foreign communist materials, and only release them if the recipient specifically requested it. The Postal Service was once more in the spotlight as the case went to the Supreme Court. In Lamont vs. Postmaster General, the court declared that clause of the law unconstitutional as it unfairly limited the free speech rights of Americans.

Despite the Postal Services’ successes during World War II and the postwar years, by the 1960s, the agency was facing a number of issues: aging facilities, outdated procedures, and disgruntled customers frustrated with these inefficiencies. As the volume of mail and packages continued to grow, it seemed that the Postal Service was unable to meet the increasing demand. Things came to a head when Postal Service workers staged a wildcat strike. Underpaid and underappreciated, the workers demanded that management negotiate with them for better working conditions. 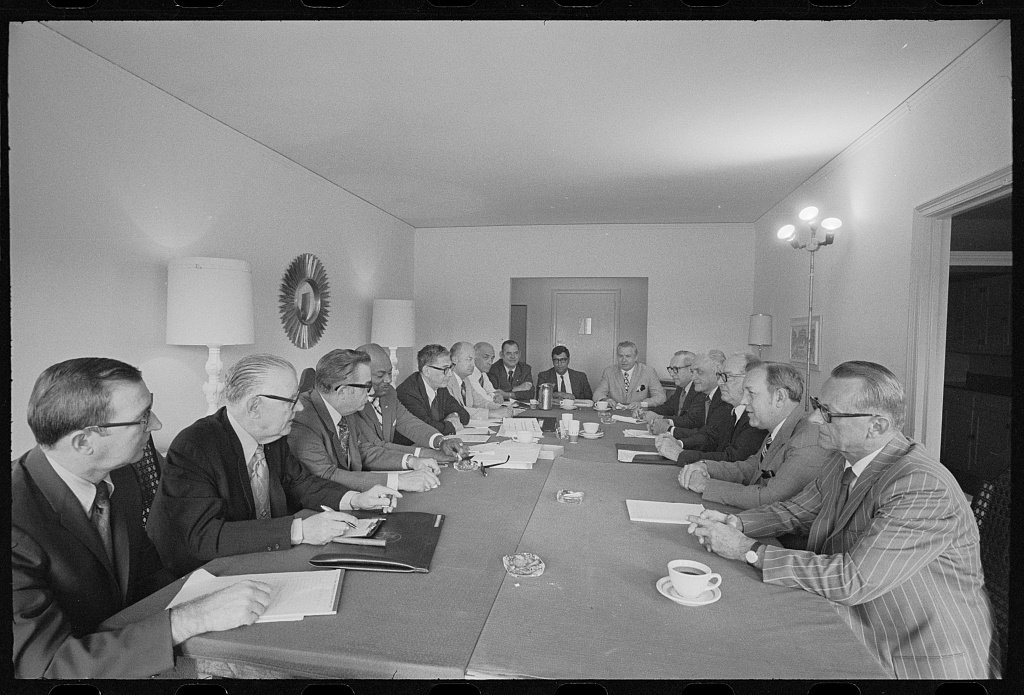 Union representatives bargain with USPS in 1971, one year after passage of the Postal Reorganization Act. Source: Library of Congress

The strike was successful. Postal workers received raises and a voice in legislative talks about how to improve the Postal Service. On August 12, 1970, after months of negotiation, the Postal Reorganization Act became law. The Postal Service was transformed into the United States Postal Service (USPS), a government corporation with a board of governors. While the goal was for the USPS to be run like a business, it was still mandated to provide efficient and effective mail services to the entire country. The law also granted postal employees collective bargaining rights, pay raises, and an improved paygrade and promotion system. Under this new structure, USPS stopped receiving government subsidies in the 1980s.

Throughout the 1980s and 1990s, the USPS began to adopt new technologies to fulfill its mission. New letter sorting machines helped the USPS tackle the increasing volumes of mail, while parcel sorting machines helped manage the packages USPS handled and delivered. The agency also installed automated kiosks at some post offices to speed up service. In the late 1990s, the agency allowed users to purchase and print barcodes for sending mail and packages. In the early 2000s, the USPS began offering online package tracking. 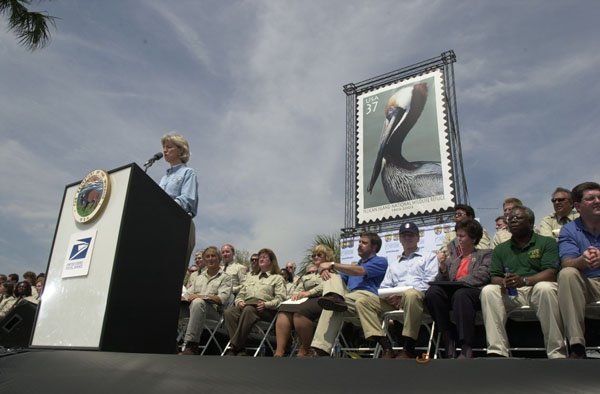 Stamps have been used to recognize and honor noteworthy individuals, organizations, and locations. This ceremony marked the unveiling of a stamp commemorating the National Wildlife Refuge System. Source: National Archives

Despite these technological and customer service innovations, the 21st century brought new challenges. In the aftermath of the terrorist attacks of September 11, 2001, the volume of mail declined, and wouldn’t recover until 2004. The General Accounting Office (GAO) also raised concerns about USPS’s finances, stating in a report that its long term outlook was “high-risk.” In 2003, in response to concerns that the USPS was on track to overpay its retirement obligations, Congress passed the Postal Civil Service Retirement System Funding Reform Act. The law was designed to ensure that the organization’s projected savings would be wisely spent. Instead, when those savings failed to materialize, the USPS was forced to raise rates, prompting public outrage.

In the face of public outrage and institutional concerns, Congress passed, with broad bipartisan support, the Postal Accountability and Enhancement Act of 2006. The law increased the power of the Postal Regulatory Commission to regulate and investigate fraud and misconduct at the USPS. It also placed limits on how much the USPS could hike the price of stamps in order to prevent future rate shocks like the one customers experienced in 2005. Rates for package post and other services considered “competitive,” where private-sector competition existed, would not be capped. The law also freed the USPS of its obligation to pay military pension costs, but it required them to pre-fund $5.6 billion of retiree health benefits each year for a decade. While this clause would soon cause the post office considerable hardship, much of the initial reception to the law was positive. Consumers praised the limits on stamp prices increases, and the GAO declared that the USPS was no longer listed on its “high-risk” list. The GAO concluded that the new law “provides tools and mechanisms that can be used to address key challenges facing the Service.” With mail volumes bouncing back, it seemed that the Postal Service was on a sounder footing and ready to meet the future. 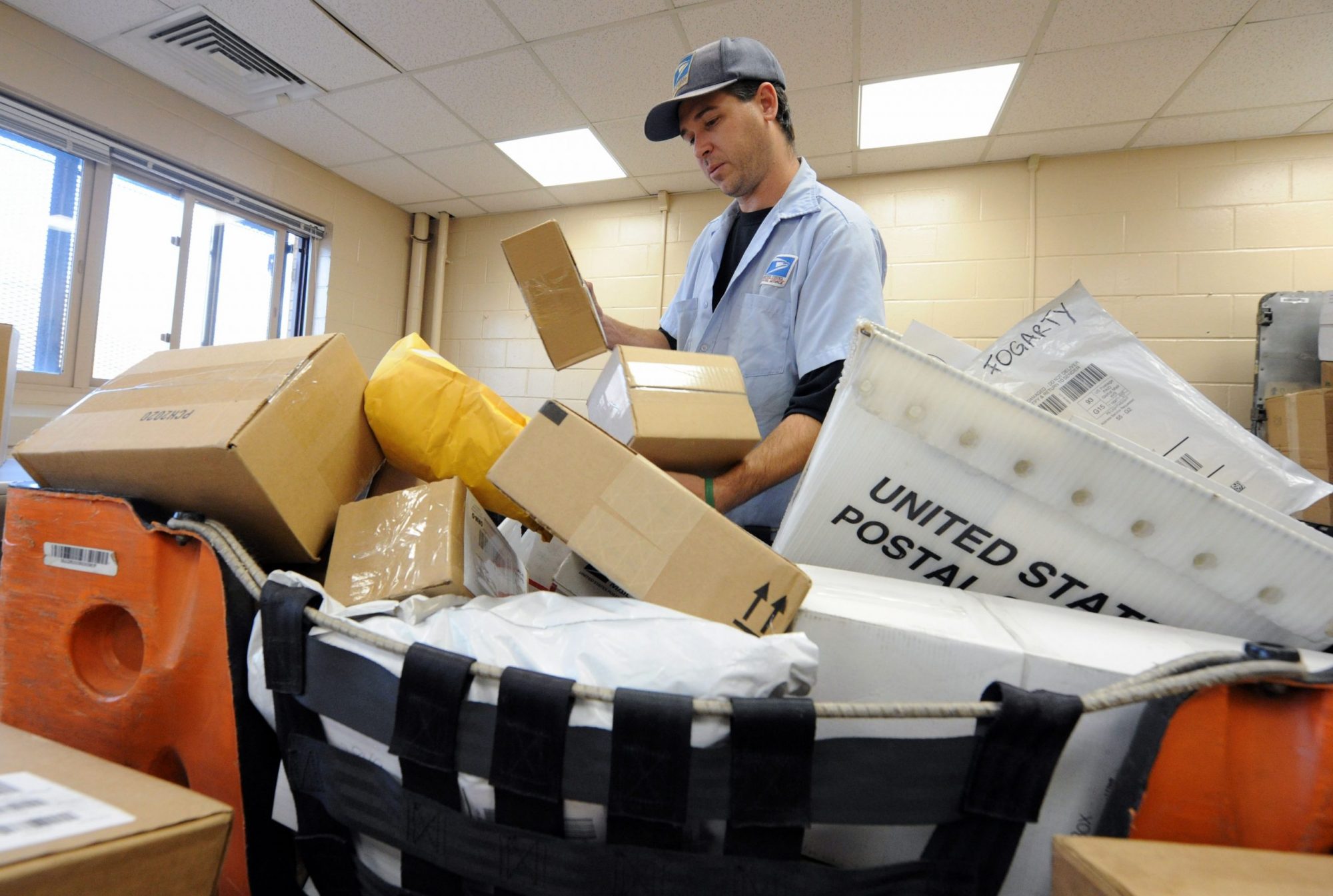 But another setback followed. The 2007 recession sent shockwaves through the USPS. The volume of first-class mail sent sharply declined, a trend that continues today. In response, USPS scaled back services and raised package shipping rates. USPS leaders asked Congress for funds and also requested that it repeal the onerous requirement of prepaying employee’s retirement health benefits. In the years that followed, the decline in the mail service line was offset by profits in the USPS’s package delivery operations. However, the retirement prepayment obligations continued to hang over the organization’s head.

The 2020 coronavirus pandemic once again threw the USPS into the public spotlight. The economic recession further imperiled the organization’s finances—but the CARES Act, a massive economic stimulus bill, passed without any funding for the struggling postal service. After opposing including USPS funding in the CARES Act, the Trump administration eventually provided a $10 billion line of credit to the USPS. As the USPS dealt with the fallout from the pandemic, attention once again turned to the prepaid retirement clause and its impact on USPS finances, with several members of Congress offering bills to tackle the issue.

USPS vans parked before the beginning of the next shift. Source: Sam LaRussa/Flickr

Now, as many Americans prepare to vote by mail to avoid the health risks of in-person voting, new policy changes by Postmaster General Louis DeJoy have impeded mail delivery in parts of the country and raised concern that ballots will not be counted on time. The USPS insists these changes will not impact its ability to deliver ballots, but not to the satisfaction of concerned critics. The USPS has since backtracked some recent changes and seen others struck down in court, but the impact on the election remains to be seen.

Throughout its history, the Postal Service has grown and changed with the country. Where mail was once delivered by stagecoach to local postal offices, today, electronic barcodes facilitate the delivery of mail and packages by plane and truck to the recipient’s front door. What hasn’t changed is the magnitude of the task at hand: connecting the United States one letter and package at a time.