Historians researching restaurant reviews from the 1950s? You’d be surprised where history takes us! Especially for topics like the fascinating tourism history of tiki bars.

The history of tourism is often overlooked, and can be difficult to study because collections and research are not generally directed to preserving restaurant menus, brochures, or other ephemera that bring the story to life. Tackling topics like tourism encourages historians to look beyond the archives. 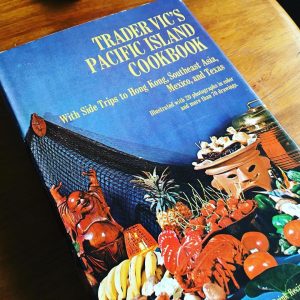 Tiki bar franchises like Trader Vic’s offered exciting new cocktails and interpretations of Cantonese cuisine that captured the hearts of the American public.

A perfect example of this is my research into the history of the tiki bar, a unique American invention of the 1930’s that hasn’t been well studied by other scholars. I was intrigued about how these experiential restaurants and bars managed to create an affordable “vacation” to the tropics and how they were instrumental to Americans’ understanding of Polynesia. So I began to dive into their history. Wading through restaurant reviews, cookbooks, memorabilia, and oral histories, I reconstructed how and why these bars entered the culinary scene during the Great Depression and exploded in popularity until their decline in the 1970’s and 1980’s.

Tiki bars built on a long tradition of the Western world idealizing life in the tropics. The first tiki bar opened in 1933 and was called Don the Beachcomber, founded by world explorer and tropical enthusiast Donn Beach. It was quickly followed by a number of imitators. Each restaurant offered their guests an inexpensive escape to a tropical paradise during hard times. With exciting new cocktails and interpretations of Cantonese cuisine, tiki bars captured the hearts of the American public. These establishments began to shape the public’s understanding of what life in Polynesia must be like at a time when only the super-rich could hope to see the islands in person. 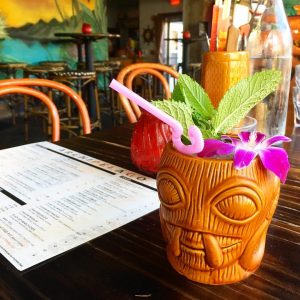 In the late 1940’s, affordable air travel to Hawaii was finally achievable for many Americans and interest in the territory exploded. When tourists landed in the soon-to-be 50th state, they were shocked to discover that the Hawaii sold to them by establishments like Don the Beachcomber and Trader Vic’s was a well-crafted illusion, not reality. These same business owners quickly realized there was a demand for their fake Polynesia in Polynesia itself, and established new businesses on the islands that continued to promote their vision of an idyllic island paradise. This complicated dynamic continues to shape tourist expectations of Hawaii and Polynesia more broadly today. On the mainland, tiki bars continued to thrive until the fad fizzled in the 70’s and 80’s, spurred on by the deaths of the founders and changing tastes in cuisine.

This April, I had the opportunity to present my article “Inventing Polynesia: The Appropriation and Creation of Polynesia in Twentieth Century Tiki Bars” at the National Conference of the Popular Culture Association (PCA) in Washington, DC as part of their series of Travel and Tourism panels. PCA is an organization that branched off of the American Studies Association in 1971 to encourage broader discussions of material culture. PCA has established two journals and membership is very interdisciplinary, including specialists in American Studies, History, and Anthropology.

Presenting at conferences like PCA that emphasize interdisciplinary work helps us network with other scholars investigating similar issues of authenticity, appropriation, and cultural exchange through different lenses. Opening ourselves up to new possibilities makes us better researchers, and sheds light on pieces of our history that have gone unnoticed.