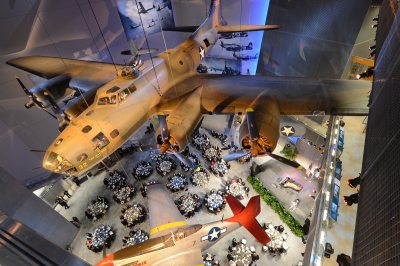 The word “artifact” may conjure up a mental image of something archaic — a dusty old object that is stored away and no longer relevant. But when revealed through the right lens, artifacts become powerful tools for bringing a story to life.

The storytelling power has nothing to do with the value, age, or beauty of an object. Instead, it is about making an emotional connection by displaying an object that crossed both time and space to appear before you. Exposure to an artifact brings the visitor closer to the past in a way that words alone often cannot do. When developing exhibit content at History Associates, we often use artifacts to help a visitor better appreciate an experience or circumstance, whether on a large scale or at an individual level. 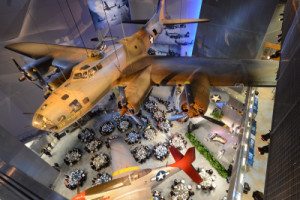 B-17 Flying Fortress planes dwarf the tables at the Grand Opening of the US Freedom Pavilion at the National World War II Museum, January 2013.

For example, standing under the massive 104-foot wingspan of a B-17 Flying Fortress, visitors at the National World War II Museum’s US Freedom Pavilion are dwarfed by its solid frame. Paired with images of 100 planes, the visitor can begin to grasp the enormous scale of America’s wartime mobilization, and ultimately why the Allies won the war. The enormity of this macro-artifact communicates the magnitude of an enterprise that ultimately produced nearly 13,000 B-17s by war’s end. Just one aircraft becomes the visitor’s measuring stick for the awe-inspiring breadth of the entire war effort.

At the other end of the spectrum, objects help a visitor relate to big events on a personal level. Standing amongst hundreds of rows of graves fanned out across the Cambridge American Cemetery in Cambridge, England, visitors can be overwhelmed by what each headstone truly represents. Looking at a sea of headstones tells the story of the loss, but not necessarily enough to grasp that each grave signifies an individual sacrifice.

Images are a simple and powerful way to enhance these stories. Just by seeing someone’s likeness, we begin to form a bond. To help the American Battle Monuments Commission tell the story of individual sacrifice at their overseas cemetery visitors’ centers, History Associates researched historic photos to tell personal stories of those who served and sacrificed.

One headstone at the cemetery belongs to 2nd Lieutenant Mary Chubb of Doylestown, PA. A registered nurse, Mary served on an evacuation aircraft in England during World War II. As the Allies prepared to invade Normandy, Mary’s brother Donald, a B-17 co-pilot, received a post nearby. The siblings jumped at the chance to see one another, but neither could predict it would be for the last time. Just weeks later, Donald’s bomber went down over the English Channel. The following month, Mary died in a plane crash near Coventry. She is buried in Plot F Row 3 Grave 53. Donald is listed on the Tablets of the Missing at the Normandy American Cemetery.

Two of seven children, Donald and Mary Chubb relished each other’s company in the Spring of 1944 after years apart. Within months, both would be listed among World War II’s fallen. 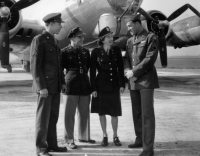 Donald and Mary Chubb in the spring of 1944.

The story alone is heartbreaking. But we found a picture, showing the two smiling siblings flanked by friends during their final meeting that provides shattering authenticity. Despite their uniforms and the heavy bomber looming in the background, this is an intimate image of friendship and family, made striking by the tragic events that would soon transpire.

A simple artifact represents a powerful connection to history large and small, whether it is a copy of the Gettysburg Address in Lincoln’s handwriting or a simple lock of hair from a family ancestor. By knowing the historical context and the story that needs to be told, selecting the proper artifact can make a story transcend time.