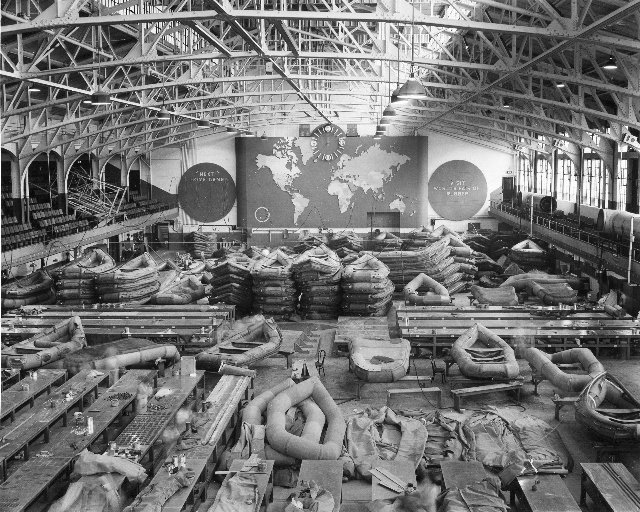 The History and Use of the Defense Production Act: Part 2

Part 1 of this blog explores the historical context of the passage of the Defense Production Act. Read it here.

President Harry S. Truman signed the Defense Production Act (DPA) on September 18, 1950. The DPA empowers the executive branch to take extraordinary measures to ensure that private industry can supply the materials and services needed in times of crisis. Executive agencies can provide DPA funding and other support to promote the development and maintenance of factories, production lines, and other aspects of critical national infrastructure. 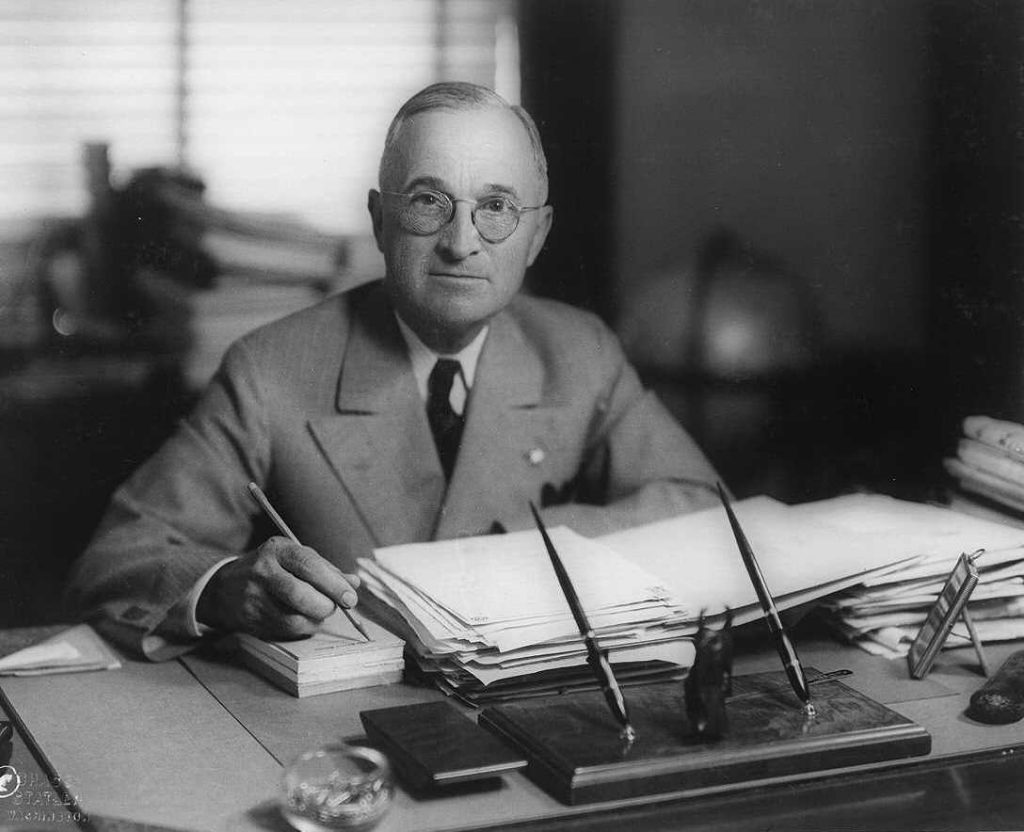 President Harry Truman used his experience investigating wartime waste and corruption to develop a policy he hoped would benefit businesses and the military during the Korean conflict. Source: Library of Congress

The DPA includes several authorities geared towards encouraging, rather than controlling, private industry. Congress established DPA funding pools for financial assistance to the domestic industrial base. For example, executive agencies may guarantee private loans and make direct loans to avoid shortfalls of industrial resources needed for national defense purposes. In addition, agencies may purchase commitments or provide subsidies to private businesses with the goal of protecting, expanding, or restoring domestic industrial base capabilities essential to national defense.

What really distinguishes the DPA, however, are the authorities that allow executive agencies to control the domestic industrial base. For example, the DPA allows executive agencies to control the allocation of supplies, raw materials, and services in any manner necessary to promote national defense. While the DPA’s allocation authorities are quite broad, congressional authorization is required for any wage or price controls.

In addition, the issuance of DPA “rated orders”—for materials and services necessary for the national defense (including natural and manmade disasters and pandemic threats)—requires private businesses to prioritize rated orders over their existing commercial obligations. The DPA shields private businesses from liability for failing to meet their other contractual obligations due to performing a “rated order.” The suggestion that all DPA authority is rarely and sparingly used is incorrect. While the DPA’s allocation authorities have rarely been used to take control of U.S. industry, the DPA’s system for placing priority orders has, for years, been in near-constant use. The Department of Defense (DoD) places roughly 300,000 DPA priority-rated orders and contracts each year. Indeed, DoD’s policy is to include a Defense Priorities and Allocation System clause in all eligible contracts and orders. Thus, it could be said that, on average, the DPA is used nearly 1,000 times per day. 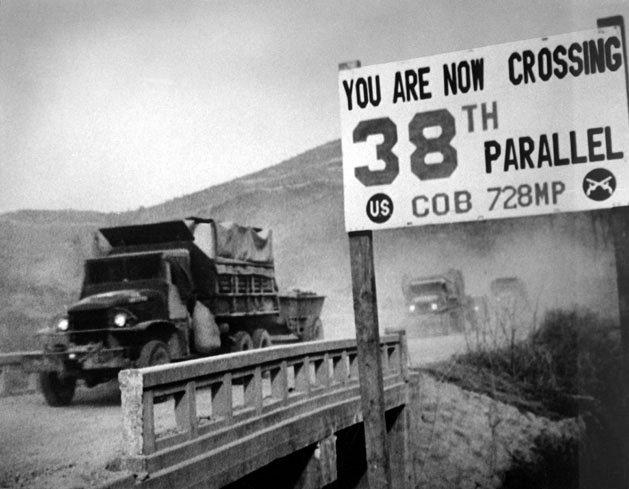 The Korean Conflict launched Americans who were just getting used to a post-war world into a period of uncertainty and alarm. Source: National Archives

“Rated orders” may be issued directly by executive agencies or by their prime contractors to other suppliers. Either way, “rated orders” include a priority designation of either “DO” (meaning the order takes priority over all unrated orders) or “DX” (the order takes priority over all DO orders). They must specify a required delivery date and provide signed certifications that the orders are being placed pursuant to the DPA.

Under current regulations, private businesses that receive a rated order must reject the order if they are unable to meet the specified delivery date either because of impossibility or because of schedule conflicts with rated orders of equal or greater priority. In such cases, private businesses must offer to complete the rated order by the earliest possible date. In addition, private businesses may reject a rated order for a limited number of other reasons—for instance, if the order is for an item that the private business does not make or supply or for a service that the business is unable to perform. In most cases, a “DO” rated order must be accepted or rejected within 15 working days, and a “DX” rated order within 10 working days. Any rejection must be accompanied by a written explanation. In performing a rated order, private businesses may (and in some cases are actually required) to “flow down” the priority rating by issuing “rated orders” to their own suppliers and subcontractors. Generally, the price and terms of a “rated order” should conform to the prices and terms normally offered by a private business in its traditional commercial dealings and no premium may be charged for fulfilling the order. A willful failure to perform a prioritized order can constitute a criminal violation punishable by imprisonment up to one year and a fine of up to $10,000. See, e.g., 15 C.F.R. §700.74. 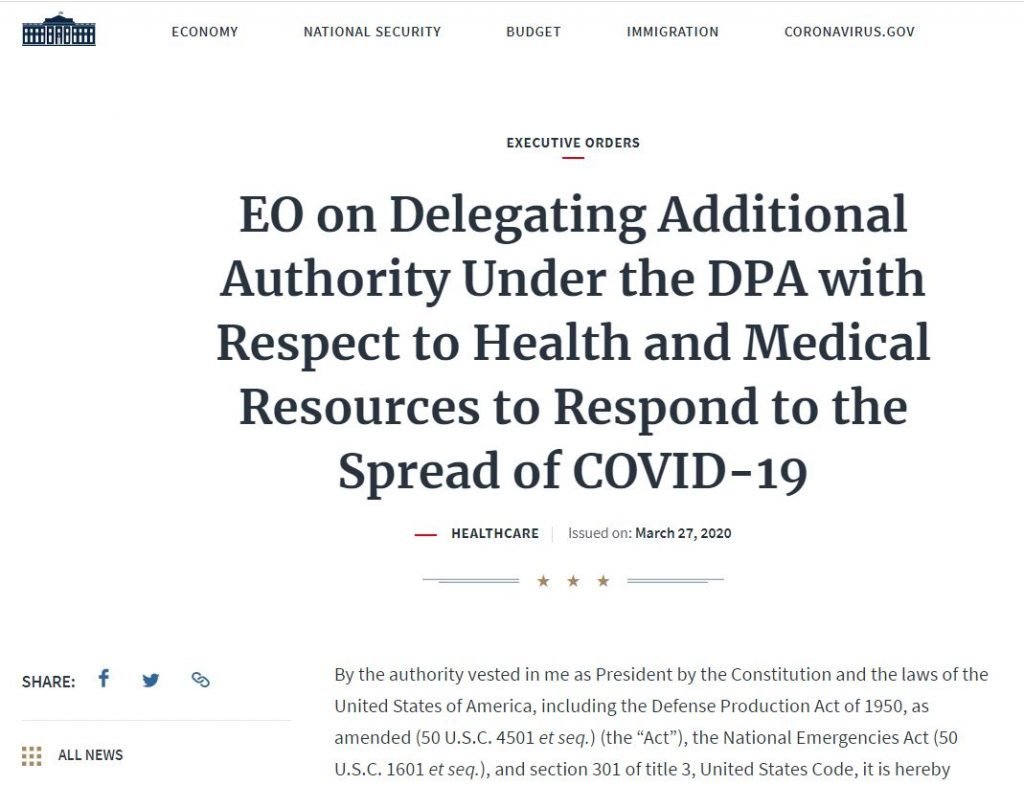 On March 27, 2020, President Donald Trump issued an Executive Order on “Delegating Additional Authority Under the DPA with Respect to Health and Medical Resources to Respond to the Spread of COVID-19.” The Executive Order delegates the President’s DPA authority to provide financial assistance, take allocation actions, and place “rated orders” for health and medical resources needed to respond to the spread of COVID-19 to the Secretary of Health and Human Services (HHS) and the Secretary of Homeland Security. Following the President’s Executive Order, HHS published a notice prohibiting the hoarding of personal protective equipment (PPE) pursuant to its delegated DPA allocation and anti-hoarding authorities. HHS has, as of this writing, issued several rated orders, most notably for ventilators needed to treat severe COVID-19 cases.

The Defense Production Act in Perspective

Fast forwarding from WWII and Korean War origins to its current usage in the battle against COVID-19, one may draw certain lessons from the DPA’s past to be considered today, when its applicability is once more under serious and vital consideration and in the news. Among such lessons may be the following:

Paul McQuade is a shareholder of international law firm Greenberg Traurig, LLP. Early in his career, he performed substantial research on U.S. Government involvement in WWII plant operations in connection with seeking contribution toward environmental cleanup costs at refineries, aviation engine, coal tar, lumber treating, and synthetic rubber plants. Any views expressed herein are those of the author, not the firm. The research assistance of Daniel Straus, an associate of the firm, is gratefully acknowledged.

Mike Reis is senior vice president at History Associates, Inc., in Rockville, Maryland, having previously served as the director of litigation research. Mike has provided deposition or trial testimony in environmental, toxic tort, building law, and historic preservation cases, as well as numerous expert reports and affidavits. He has directed numerous historical investigations focused on the federal government’s role in wartime mobilization and contracting, from the world wars through the recent, ongoing Middle Eastern conflicts.

Emily Sullivan is a former historian at History Associates, Inc., in Rockville, Maryland, where she undertook research and writing projects focused on the U.S. military experience in World War II. She previously interned with the education department at the National Museum of the U.S. Navy.

Confrontation with the Past: The Legacy of American Indian Boarding Schools in the United States
Chronicling Health and History: HAI’s Decades-Long Collaboration with the NIH
The Capitol Has Fallen! When the British Burned the Capitol Building
The History and Use of the Defense Production Act: Part 1