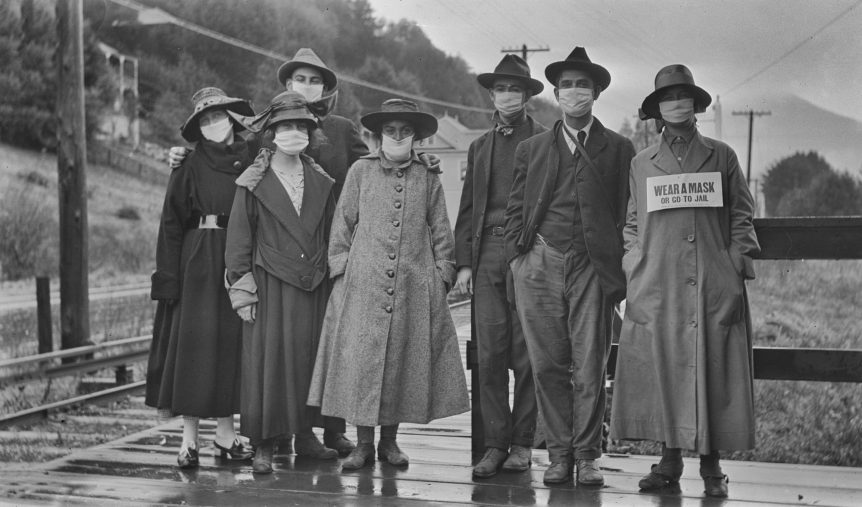 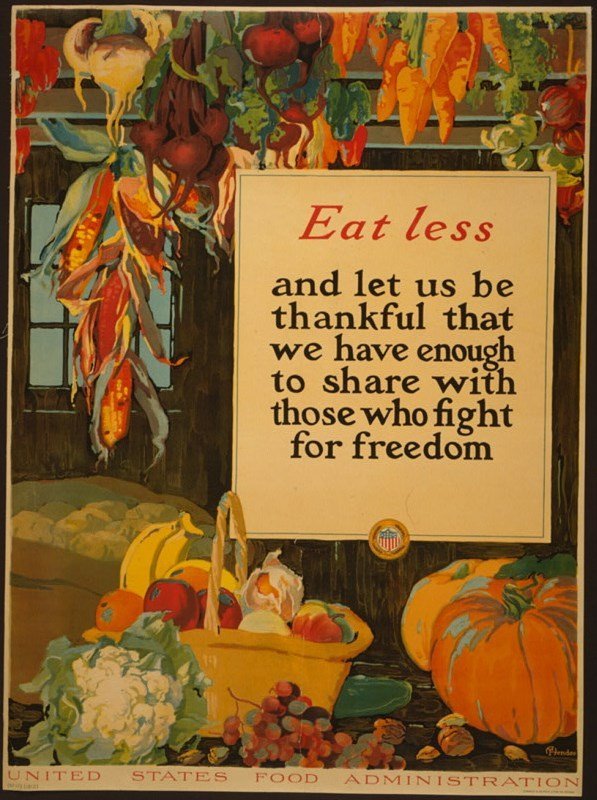 The United States Food Administration circulated this poster in 1918, imploring Americans to “Eat less” that Thanksgiving and conserve resources for “those who fight for freedom.” While the government remained focused on the end of the war effort, the pandemic raged on. Source: Library of Congress

Back in the spring, when quarantines and stay at home orders still felt new, I wrote a blog exploring reactions to the 1918 influenza pandemic. Now, as Americans everywhere ponder how their Thanksgiving celebrations might look different this year, my thoughts again turned to 1918. That year, infection rates had dropped over the summer, so much so that it seemed that perhaps the virus had run its course and would disappear. By September, however, all hopes were dashed. Mutations in the virus, combined with a surge in international travel as troops from around the world traveled home at the end of World War I, made for a deadly fall. Failure to impose quarantine restrictions contributed to the spread and death toll of the virus, as did racism—even as demand for trained medical personnel skyrocketed during the war and the pandemic, the US Army and American Red Cross refused to enroll or assign Black nurses to active duty until November 1918.

Nearly 200,000 Americans died in October alone. The end of the war and return of American troops was cause for celebration, and in the traditional presidential Thanksgiving proclamation, Woodrow Wilson invited Americans everywhere to gather in homes and places of worship and “be grateful and rejoice”—but at what cost? As Thanksgiving approached, what measures were families and communities taking to avoid a holiday filled more with grief and suffering than gravy and stuffing? Newspaper articles from the days before and after the holiday, which took place on Thursday, November 28, offer some insight.

In communities across the country, newspapers reported that the pandemic had forced the cancellation of usual Thanksgiving celebrations. In Bismarck, North Dakota, the local paper noted that “the recent influenza pandemic has so interfered with the organization of Bismarck high school athletics that the usual Thanksgiving football game must be dispensed with.” Instead, the day would be one of “quiet thanksgiving even such as that in which our Pilgrim fathers consecrated themselves upon the first Thanksgiving day at Plymouth rock, when a new nation was in the first throes of birthhood.” The Associated Charities of El Paso, Texas, postponed its annual Thanksgiving food and clothing drive until Christmas. A reporter for the Richmond (Indiana) Palladium expressed frustrations that we can all relate to: “A pleasant Thanksgiving with nothing to do. According to weather and influenza reports, that will be the condition in Richmond tomorrow. Weatherman Moore predicts a fair and warm day, but health officers still keep the ban on all amusements or gatherings.” 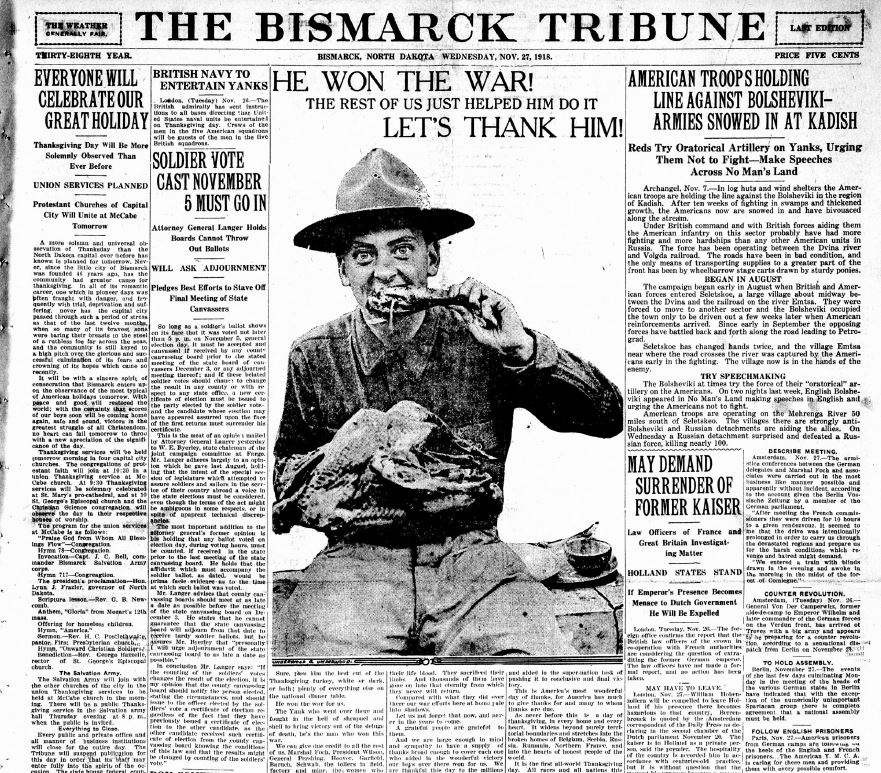 Like many newspapers across the country, the Bismarck Tribune balanced the urge to celebrate Thanksgiving and the end of the war with reports about the pandemic. Source: Library of Congress, Chronicling America

In other cities, headlines about the pandemic appeared alongside news of upcoming Thanksgiving events. In churches across Philadelphia, Pennsylvania, congregants gathered to give thanks and put on pageants and food sales. Meanwhile, 25 children under the care of an aid organization, most of whom “had been ill with influenza, while in other cases their parents had been stricken with the disease,” received a full Thanksgiving meal. 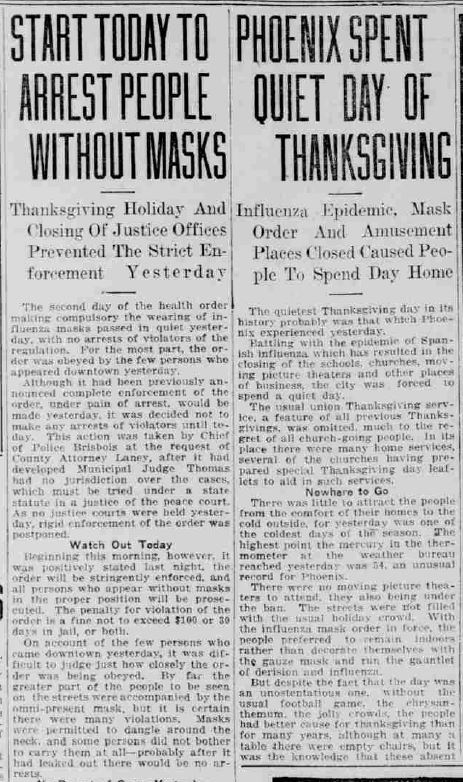 On the Wednesday before Thanksgiving, the Alaska Daily Empire had a cautiously optimistic tone. Emory Valentine, the Mayor of Juneau, lifted the city-wide quarantine that had closed movie theaters, pool halls, churches, and hotels, but “the people must wear masks a few days.” If no new influenza cases developed in the following days, the mask ordinance might be lifted as soon as December 1. This stands in stark contrast with the situation in Phoenix, Arizona, where headlines in the Friday, November 29 issue of the Arizona Republican set the scene: “Phoenix Spent Quiet Day of Thanksgiving,” “Start Today to Arrest People Without Masks.” Violators of the city’s mask ordinance faced a fine of $100, 30 days in jail, or both. Fortunately, on Thanksgiving, there were few reports of violations—perhaps because, as the next article reads, there was “nowhere to go.”

Meanwhile—in a casual way that, with the retrospect that 2020 has allowed, seems chilling—the “personals” sections of newspapers across the country announced notable social goings-on. Here, the attendees of Thanksgiving parties mingle with influenza victims. This is on full display in Ohio’s Medina Sentinel. On one line: “Mrs. Eva Maple of Cleveland is spending Thanksgiving with her parents, Mr. and Mrs. A. L. Smolk.” On the next: “Miss Alice Best is suffering from an attack of influenza.”

It is difficult to derive any specific lessons from Thanksgiving 1918. The 1918 flu was a very different virus from the one we’re dealing with now. It had different symptoms, a different timeline, and hit young men and women especially hard—it was most deadly for people ages 20 to 40. But we can glean from the historical record that the pandemic interfered with the Thanksgiving holiday in innumerable ways. It will do the same this year—but how we cope with it will make all the difference. So from all of us at HAI to all of you, here’s hoping that your holiday is quieter and maybe a little more boring than usual, but, most importantly, safe and healthy.