Road to Tokyo: Pacific Theater Galleries opened at The National WWII Museum in New Orleans last December after more than two years of intense work by a team of Museum staff, media producers, designers, fabricators, and content developers. History Associates served on the content development team for the new installation, which features ten galleries, each focused on a different aspect of the war in the Pacific. 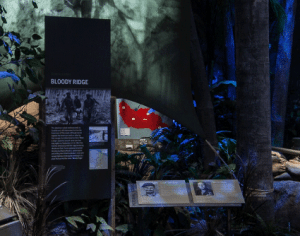 “Guadalcanal: Green Hell” gallery in the Road to Tokyo exhibit. Immersive displays include maps and personal stories to help visitors understand what troops faced during the fighting. Photo courtesy of The National WWII Museum

To create an immersive experience, the designers aimed to make visitors feel like they are transported to a place during the war, like standing on the bridge of the USS Enterprise or walking through a dense jungle at Guadalcanal. Our job at History Associates was to convey important historical details and personal stories in the context of these experiences to help guests come away with a deeper understanding of what happened.

Some of our challenges were obvious. My colleagues and I struggled with how to effectively describe what the Americans were dealing with so that the enormity of their accomplishment would be understood. Unique to the Pacific theater of WWII was the sheer size of it.

Much of the fighting occurred on tiny islands across a vast expanse of ocean, halfway around the globe from the United States. One of the US objectives was the Philippines – a distance of more than 5,000 miles from the US Naval base at Pearl Harbor. Tokyo is over 3,800 miles from Pearl Harbor and over 5,000 miles from San Francisco. Even from the Marianas, an island chain from which B-29 bombers were launched toward the end of the war, it was a 3,000-mile round trip to Japan and back. For perspective, New York City to San Francisco is just over 2,500 miles. 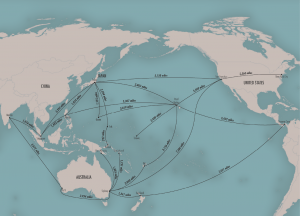 History Associates created maps to help orient visitors to the vast distances covered during the fighting (click to enlarge). Map courtesy of The National WWII Museum

One way we helped orient visitors to the scale of the battlefield was to create maps for this exhibit, but our challenge was that the large distance between areas in the Pacific campaign made it harder to maintain perspective and still show the battles. Some of the atolls where the fiercest fighting took place would virtually disappear if you made a map to scale with North America and China shown as reference points. Mapping the progression of some naval battles was difficult too because the movement of various ships and assets during the battle might appear as if ships were moving in circles. We used our historical understanding to determine how to best simplify the illustrations so that they were still accurate but easy to understand.

Other challenges were personal and unexpected. A hallmark of the Museum is the emphasis on first-hand accounts and personal artifacts from the war. We were particularly excited to research the stories of individuals who were there, and saddened by the special urgency of sharing their stories, as so many of our surviving veterans are dying. Many of these stories are powerful, moving, and unforgettable. The Museum has its own extensive oral history collection (you can check out part of their “See and Hear” collection online) and we conducted additional research using university collections, newspaper accounts, official military reports, and correspondence with family members.

One of my favorites is the story of Guy Gabaldon. Guy was raised in a Japanese-American family and enlisted in the marines at 17. During the invasion of Saipan, Guy was able to sneak behind the front lines and, speaking in fluent Japanese, convince two men to surrender. He tried again the following night—this time returning with 50 prisoners. On another foray, he discovered Japanese troops preparing to attack and provided valuable advance warning to his comrades. By the time he was evacuated due to wounds, Guy had captured some 1,500 prisoners and had become known as the “Pied Piper of Saipan.”

My colleagues and I are proud to have been on the development team for the “Road to Tokyo” exhibit. It is a professional privilege to help visitors understand the historical and geographical context of the war in the Pacific and to engage the past through the stories of those who were there.

Historian Megan Anderson was also on the content development team for History Associates and contributed to this article.

(Re)building Museums: Reflections on the Mid-Atlantic Association of Museums 2021 Symposium
Chronicling Health and History: HAI’s Decades-Long Collaboration with the NIH
Unfreezing 1923: How the Reopening of the Public Domain Opens Doors for Museums
Lean In and Let Go: Creative Team Building in Small Museums