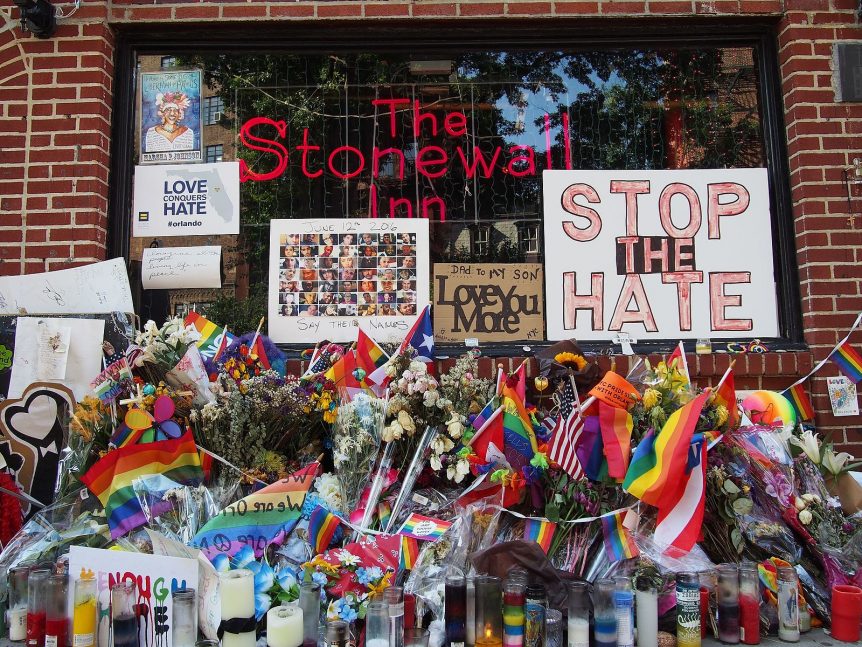 June is Pride Month, a celebration of the LGBTQ+ community and the freedom of LGBTQ+ individuals to be themselves. While the COVID-19 pandemic has forced the cancellation of most Pride events, we can still take time to reflect on the history of Pride, and how members of the LGBTQ+ community have fought for their rights and visibility. 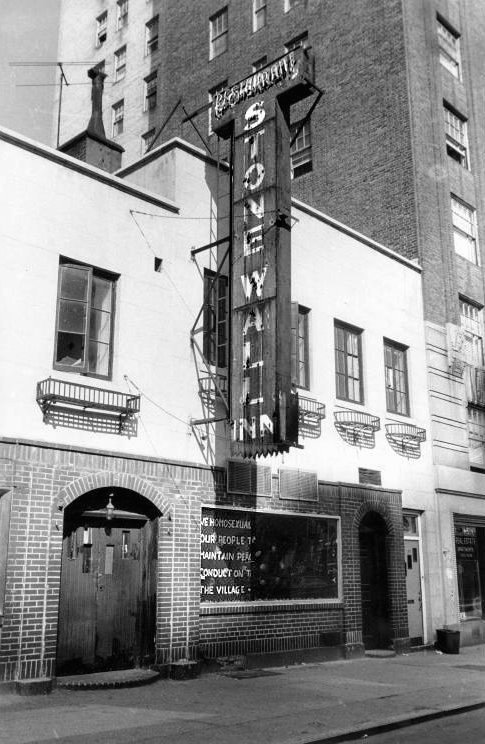 The Stonewall Inn. Marsha P. Johnson, a prominent activist in New York City’s gay community, is credited by some as one of the first people to throw a projectile during the Stonewall Riots, although Johnson personally denied the claim. Learn more about her life and legacy here. Source: Wikimedia

Pride is held in June to commemorate the Stonewall Uprising, a series of riots that began on June 28, 1969 at the Stonewall Inn in New York City’s Greenwich Village. Prior to the riots, American gay rights activists favored methods that emphasized nonviolence and education on how gay people could assimilate into American society. By the late 1960s, the atmosphere was ripe for change. Years of Civil Rights and anti-Vietnam War protests, combined with the rising popularity of counterculture, prompted gay people fed up with social discrimination and police harassment to change tactics.

So when police entered the Stonewall Inn shouting, “Police! We’re taking the place!” the situation quickly spiraled out of their control. Patrons refused to show identification, and others protested when officers physically groped female customers. A large crowd formed around the bar as the officers made arrests and herded people into police wagons. Participants later recalled the spontaneous nature of a riot which arose from the growing, collectively understood sense that something had to be done. Stonewall Inn patron Michael Fader recalled, “There was something in the air, freedom a long time overdue, and we’re going to fight for it. It took different forms, but the bottom line was, we weren’t going to go away. And we didn’t.”

A police officer hit a woman–who some believe to have been activist Stormé DeLarverie–over the head as he shoved her into the van. She fought back and called out for people to do something. In response, people threw coins, bottles, and other debris at the officers. Within minutes, a full-fledged riot exploded, with the police barricading themselves in the bar as rioters tried to set the building on fire. The fire department extinguished the fire and rescued those inside, but the riots raged on for five days, culminating in a violent encounter near the offices of The Village Voice after the paper printed an inflammatory report on the riots.

The Stonewall Riots weren’t the first instance of the LGBTQ+ community demonstrating against oppressive laws and attitudes, but it’s considered the spark that ignited contemporary activists. After Stonewall, members of the gay community realized they couldn’t let the riots become a footnote in history books, and quickly began organizing to create a more unified gay liberation front. On June 27, 1970, Chicago Gay Liberation organized a march, with groups in Los Angeles and New York City holding their own the following day. New York’s event was coordinated by Brenda Howard, a LGBT activist known as the “Mother of Pride.”

PBS later interviewed participants in the New York City march. They recalled a sense of fear and uncertainty as they headed to the event, concerned that if only a small group showed up to participate, they would become easy targets for anyone looking to start trouble. One marcher noted: “… we were going fast. People that were involved in it like me referred to it as ‘the first run’. We had been threatened… people could take shots at us, we were scared. But as we were going up Sixth Avenue, it kept growing.” Estimates vary on how many attended this first march, but several thousand people are believed to have participated. These early marches quickly became annual traditions.

The Stonewall Riots have become the most well-known and discussed incident of civil disobedience by the LGBTQ+ community, but the community continued fighting for visibility, acceptance, and equal treatment under the law. During the AIDS crisis, concerns grew that existing Gay Rights groups were not doing enough to pressure the government and drug companies to develop affordable, effective treatments for people with HIV/AIDS. On March 24, 1987, a group of New Yorkers founded AIDS Coalition to Unleash Power, or ACT UP. In October of 1987, ACT UP made their national debut as part of the Second National March on Washington for Lesbian and Gay Rights. Papers compared the march to the Civil Rights marches of the 1960s: between 200,000 and 750,000 people participated in or witnessed the demonstration. 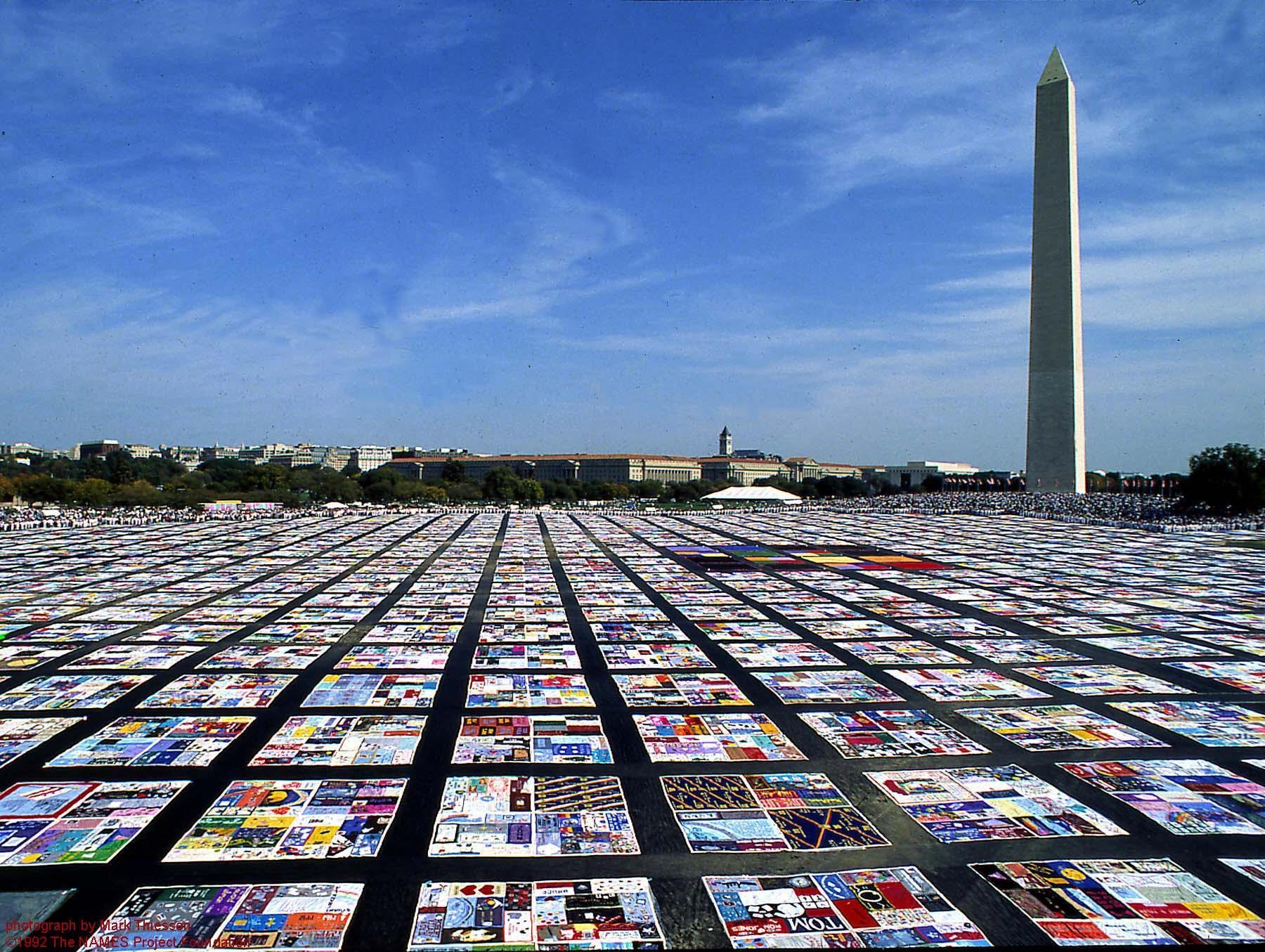 The AIDS Quilt is the brainchild of Cleve Jones, who drew inspiration from posters marchers created to commemorate people who had succumbed to the disease. With many victims lacking a memorial service or grave site, the quilt became a way for family members and loved ones to honor those lost. As of 2020, it weighs 54 tons and holds the record as the world’s largest piece of community folk art. Source: Library of Congress

In addition to the march, the event included the first public display of the NAMES Project’s AIDS Memorial Quilt, sewn to commemorate the lives lost in the epidemic. Members of ACT UP also participated in an act of civil disobedience at the Supreme Court, joining others in protesting the ruling of Bowers v. Hardwick, which upheld a Georgia law that criminalized sodomy. These actions inspired political activism and the establishment of new ACT UP chapters.

Flyers like this one helped ACT UP spread their message directly and aggressively, leaving little room for misinterpretation. Source: New York Public Library

ACT UP again made headlines the following year when members organized a massive protest at offices of the Food and Drug Administration (FDA) in Silver Spring, Maryland. In the late 1980s, the drug treatments available to those with HIV/AIDS were prohibitively expensive or otherwise exclusionary. AIDS activists believed the federal government and other agencies were dragging their feet through an already lengthy drug approval process to get new and potentially lifesaving medications to those who needed them most. By demonstrating their knowledge of the drug approval process and creating a professional and coordinated campaign, members of ACT UP were able to clearly communicate their platform to the media through organized press kits and interviews. This helped to keep news coverage of the event focused on and sympathetic to the cause. 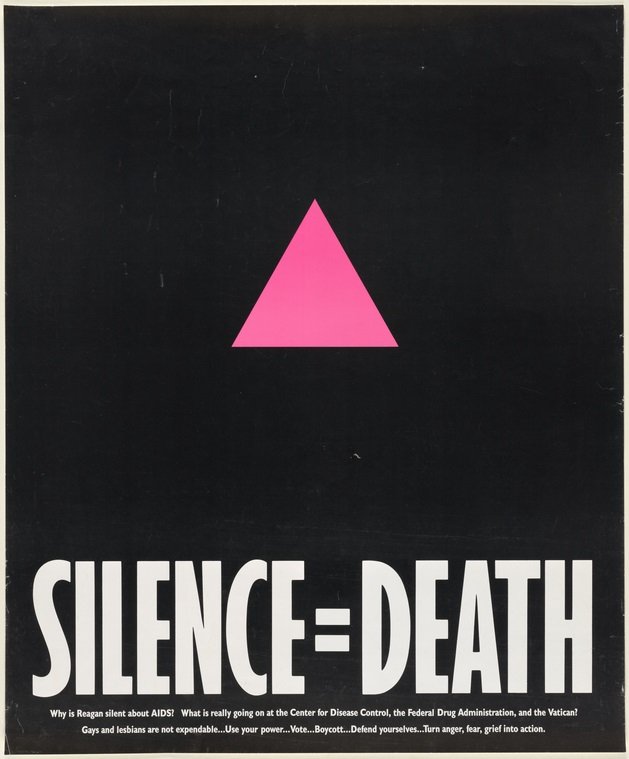 Silence = Death was a slogan originally developed in 1986 as a way for members of the gay community to express their anger at the government’s lack of response to the AIDS epidemic. Source: New York Public Library

The FDA demonstration began at the Department of Health and Human Services under the banner HEALTH CARE IS RIGHT, followed by a siege of the FDA office the following day. Although demonstrators were unable to enter the building, they draped signs and banners over the structure and staged often elaborate plays showing the effect of the epidemic in front of TV cameras. Protestors wearing t-shirts with slogans like SILENCE = DEATH chanted: “Forty two thousand deaths from AIDS, where is the FDA today?” The media compared the size of the protests to those held against the Vietnam War years before.

Following the protests, government agencies like the FDA and National Institute of Health (NIH) began to work directly with AIDS activists, listening to concerns, facilitating discussions, and asking for opinions. Notable among these new allies was Dr. Anthony Fauci, who worked to make HIV medication clinical trials available to more people, expanded trial groups to include underrepresented communities, and included activists and people living with HIV in the planning committee of the AIDS Clinical Trials Group. When interviewed about Fauci’s role during the COVID-19 epidemic, ACT UP member Jim Eigo remembered that “Fauci, despite being straight and Catholic, was not only not homophobic, which much of medical practice still was in the late 1980s, he also wouldn’t tolerate homophobia among his colleagues. He knew there was no place for that in a public-health crisis.” 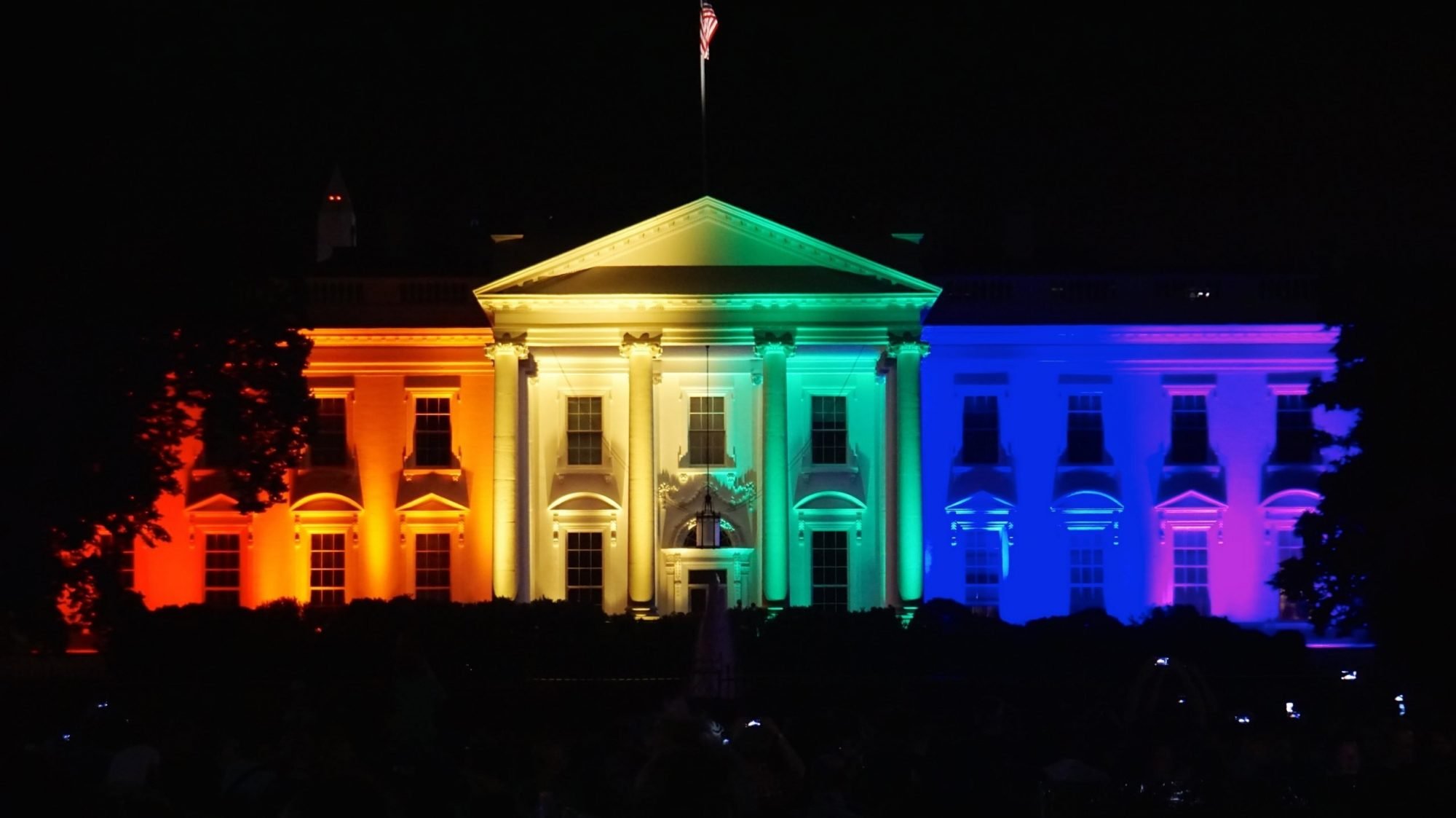 After the Supreme Court’s ruling in Obergefell v. Hodges on June 26, 2015, the White House was illuminated in rainbow colors. Source: Wikimedia

When the Supreme Court’s 2015 decision in Obergefell v. Hodges brought marriage equality to the United States, many people inside and outside of the LGBTQ+ community became concerned that the rhetoric had shifted, implying that the fight for gay rights is over. Others argue that Pride has become too corporate, as companies take advantage of the increased acceptance of the LGBTQ+ community to sell merchandise to those celebrating Pride month rather than supporting the community in more meaningful ways. The Supreme Court’s June 15, 2020 decision to protect gay and transgender people from workplace discrimination marks another important landmark in LGBTQ+ rights, but there is still work to be done. Pride parades may not fill our streets this month, but their purpose, message, and aims remain.