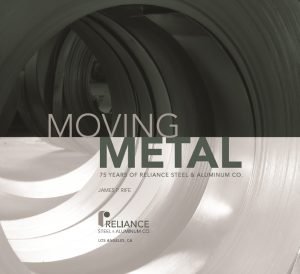 Written to commemorate the 75th anniversary of Reliance, the story begins in 1939, when founder Thomas Neilan reluctantly accepted a few tons of rebar as payment for a loan. From there, Reliance grew into the largest metals service center company in North America. The book tells an engaging story, highlighting recurring themes from the company’s long history and its complicated structure of 24 divisions and 34 subsidiaries.

Thoroughly researched and written for a general audience, the book is drawn from 19 oral history interviews with key figures in Reliance’s past and present; research in the company’s holdings and at repositories such as the Library of Congress; and research within secondary publications such as newspapers and trade journals.