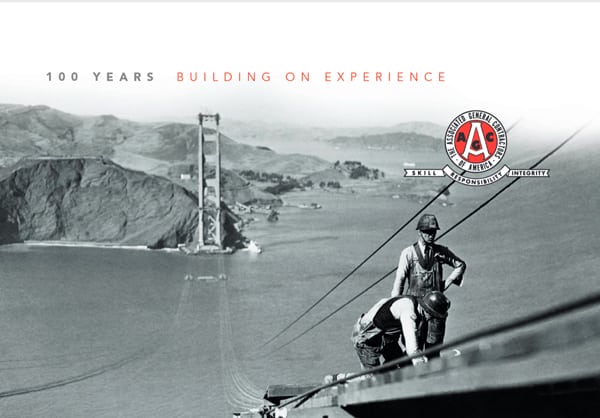 A photo showing the Golden Gate Bridge under construction, from the AGC centennial book.

People of a certain age may not relish birthdays, but major milestones are strategic opportunities not to be missed for associations. Groups use anniversaries not to obsess about the past but to reposition for the future and reach new audiences. It’s an endeavor on which some begin planning years in advance and spend millions of dollars.

“We view this as a transformative process as much as it is a celebratory process,” said Brian Turmail, vice president of public affairs and strategic initiatives at the Associated General Contractors of America, which turns 100 this year.

Many associations, in fact, have reached centennials recently, or are about to.

The Progressive Era and World War I saw a wave of industry and professional group formation, according to Ken Durr, vice president of history services at Rockville, Md.-based History Associates, which produces historical books and exhibits for corporate and association clients.

Aircraft manufacturers, toymakers, oral surgeons, welders, amusement park owners, association professionals themselves and representatives of a host of other sectors came together about 100 years ago. 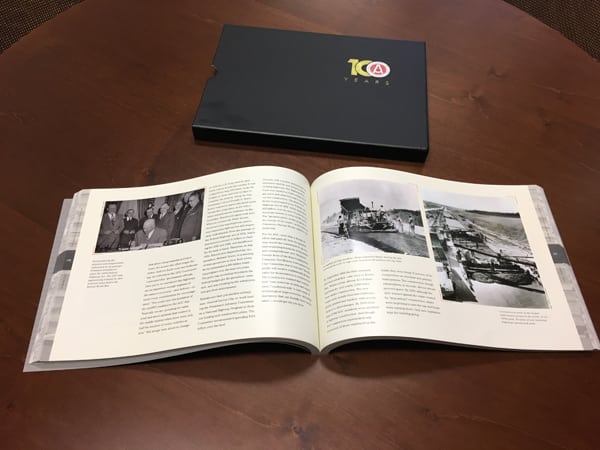 AGC commissioned research for its centennial book from History Associates in Rockville, Md.

AGC was born in November 1918, the same month the war ended, at the suggestion of a U.S. government that realized industry associations would make war mobilization easier.

Actually, the government asked the U.S. Chamber of Commerce to bring the industry together under its umbrella, Turmail said. The Chamber itself was formed in 1912 at the urging of President William Howard Taft.

But AGC’s founding members felt a Chamber-led meeting in Atlantic City in the spring of 1918 was too geared toward subcontractors, Turmail said. The general contractors subsequently met that fall in Chicago and created AGC.

The $20-million revenue AGC spent 10 years saving money and planning for a year-long observation of the centennial, including a sold-out “birthday party” on Oct. 1 at the Ronald Reagan Building and International Trade Center in Washington, D.C., said Turmail. The organization has spent about $1 million celebrating the anniversary. Commemorative books, an interactive website, historical exhibits, new logos and food, drink and space for 1,200 guests at one of the most prestigious locations in Washington do not come cheap.

Fostering a sense of community and recognizing highly engaged members past and present are just two purposes of the celebration. The third is to look ahead.

“Our board has been clear that we need to take this opportunity not just to feel good about what we’ve accomplished, but to take a collective breath and think about whether we are ready to be as successful over the next 100 years,” Turmail said.

“We are taking a hard look at how this industry is going to evolve (given such advances as robotics and artificial intelligence) and we are taking the steps now to prepare our members for those changes so they are not disrupted out of business but instead actually can take advantage of those changes and thrive,” he said. 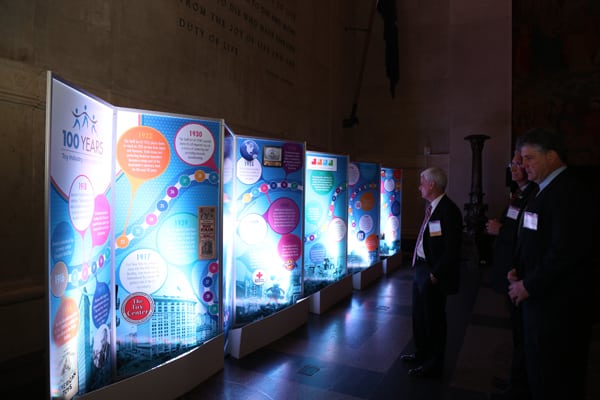 The Toy Association marked its centennial in 2016 with a gala at the American Museum of Natural History in New York.

The Toy Association, launched in 1916 as the Toy Manufacturers of America, took that approach two years ago, said CEO Steve Pasierb. The $19 million-revenue group spent about $5 million on the endeavor.

“We didn’t try to make it selfish, or just about being part of the association,” Pasierb said. “We tried to make it a true, yearlong celebration of the industry.”

Associations should take a strategic approach to milestones, Pasierb said—the toy industry group saw its centennial as a rebirth. It created a committee of industry giants to oversee the planning process.

“We didn’t want to do it as a new tag line—change the logo and say it’s our 100th anniversary,” he said. “We used it as a pivot point for the next hundred years.”

The New York City-based Toy Association changed its branding, name (dropping the word ‘industry’) and website, and moved its own Toy Hall of Fame to a permanent exhibit with the National Toy Hall of Fame at the Strong Museum in Rochester, N.Y.

But the association also moved its offices in New York and Washington, D.C., to new locations. Stodgy was out. Toy themes were in.

“I used to kid people that our old offices looked like those of a law firm with a toy industry client,” Pasierb said. “Beige, boring and very generic with 20-year-old, falling apart furniture.

“We said, ‘All right, we haven’t spent any money on this in 20 years, we’re going to hire the best architect and the best builders and we’re going to build a showcase for our members,’” Pasierb said.

The Toy Association now occupies the 10th floor of a building in Manhattan’s Garment District with meeting rooms and offices for members when they visit.

“This place looks more like a toy company than some of the toy companies,” Pasierb said.

“You look at it as an opportunity. We said, ‘Let’s not wait two or three years to do this, let’s do this now, let’s try to knit all these different pieces together,’” he said.

The association has a centennial website with links to historical news, yearbooks, annual reports and facts and figures.

AIA statistical booklets published from 1945 to 2000 are among items available online in PDF form, with pencil marks from early readers visible on some of the pages. Among the stats: In 1914, 49 aircraft were produced in the United States, just 15 for the military; by 1918, the figure was 14,020 and all but 29 were for the military. In 1944, every single one of the 95,272 aircraft manufactured was for military use.

But AIA’s rich history, from biplanes to booster rockets and beyond, does little by itself to promote the industry to a younger generation of workers. For its upcoming centennial, AIA wants to reach new audiences and is launching several mostly digital awareness campaigns, said Caitlin Hayden, AIA vice president of communications.

One campaign is focused on aerospace innovations that have made modern life possible. Others cast an eye on the future with help from member company chief technology and chief strategy officers.

“We’re trying, geographically, to get out of D.C. but also outside the policymaker audience and focus on a millennial audience, on the African-American and Hispanic audiences,” Hayden said.

“Making sure that the people we want in our workforce know who we are, what we are doing and the kind of future we are trying to create is important to us,” she said. “If we don’t leverage the centennial to do that we think we are missing a really good opportunity.”

To amplify the message that aerospace technology is cool, AIA plans a presence at the annual South by Southwest conference in Austin, Texas, next March.

“It attracts more than 400,000 largely young people and thousands of reporters, and it’s really a tech and innovation festival,” Hayden said. “That’s a much different audience for AIA.”

AIA did not disclose the budget for its anniversary plans. 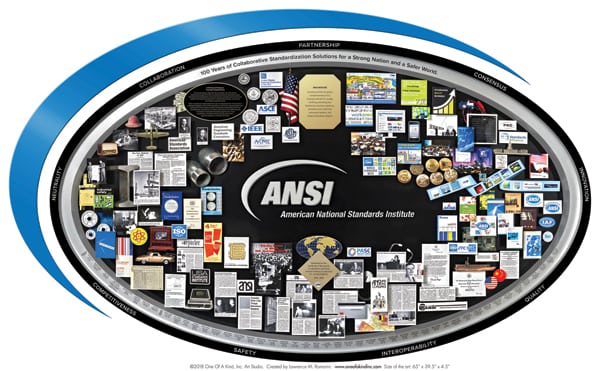 Silver Spring, Md., art studio One Of A Kind produced this 3D collage for ANSI’s centennial.

A number of association headquarters display collages, created by One Of A Kind art studio, marking their 50th or 75th anniversaries. Studio director Donna Rome said she and her husband, artist Lawrence Romorini, are seeing more association clients recognizing centennials. Their most recent such work was for the $50 million-revenue American National Standards Institute, which turned 100 this year.

The firm in Silver Spring, Md., includes tokens of the past in its portable three-dimensional sculptures, along with words or statements of the organizations’ guiding principles and membership benefits.

“Recognizing an anniversary is a great way to remind especially newer members and the general public what distinguishes an organization,” she said.

Some associations have taken One Of A Kind’s displays to lawmakers to remind them of the history and impact of their industries. The displays also can be digitized and made interactive.

The cost of the displays depends on the size, number of items included and complexity, but starts in the $5,000 range, Rome said.

A fresh take on history

AGC hired History Associates to do historical research for a commemorative book and for a 20-foot-square exhibit that was used at the group’s annual convention earlier this year and will be featured again at the upcoming centennial gala.

“The exhibit is like a mini-museum for the association and the industry,” Turmail said.

The archivists and historians at History Associates draw on a variety of sources, from internal association documents to records that a company may have donated to a university, said Durr.

“We are here to find a fresh story,” Durr said. “Every association tends to have a story that has been passed down over the years. Old Joe has a box in the corner. We can break that old story open and provide a fresh, new, compelling story.

“History as we understood it 50 years ago is not history as we understand it today. Every generation has to write its own history. We take a fresh look at the records and almost always find new information our clients never knew existed and we put that together in a story that makes sense for people today,” Durr said.

AGC was surprised how important its history was to younger executives of its member
companies.

“We spent a lot of time, in the early days of planning, talking to our younger professionals,” Turmail said. “We didn’t think they’d be excited about this but what we heard was it’s incredibly important for them to be associated with a group that has been doing so much for the industry for so long.

“They get more excited about their involvement in the association when they realize they are following in the footsteps of generations of people who came before,” he said. 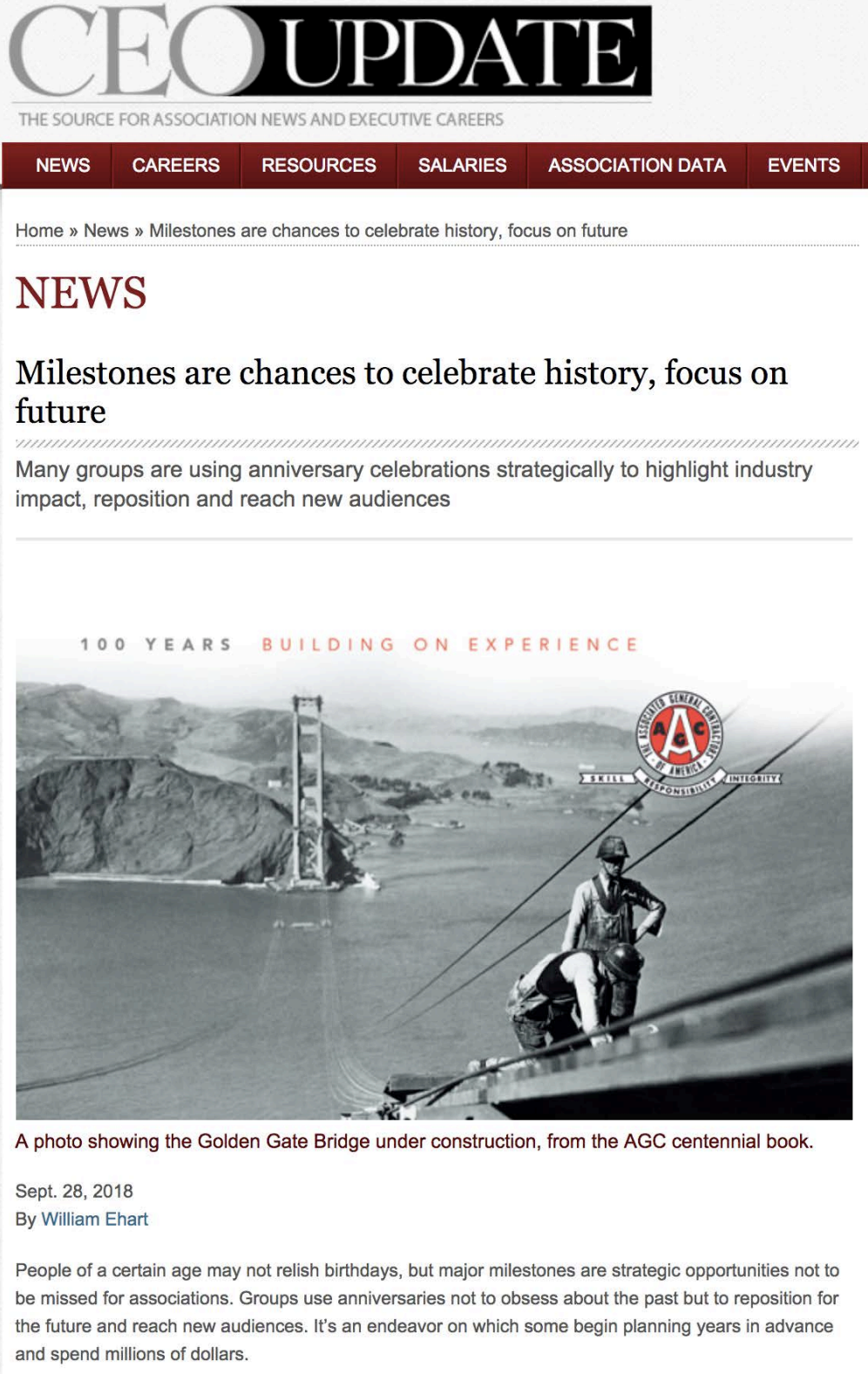 Reprinted/distributed with permission. This article originally appeared in the September 28, 2018 issue of CEO Update. For more information, visit CEOupdate.com.