The Evolution of a Profession: The First 75 Years of the American College of Foot and Ankle Surgeons 1942-2017

In the early 1940s as the practice of podiatry reached mainstream status, a smaller group created the American College of Foot Surgeons to establish and uphold the highest standards for practitioners of foot surgery. This extensively researched and meticulously documented book tells the story of how the College grew from a loosely directed volunteer organization to a highly disciplined professional association, the American College of Foot and Ankle Surgeons, an evolution that has realized all of the founders’ aspirations and revolutionized the practice of podiatry.

“Judge Kelly Goto found the depth of immersion impressive, as well as the level of research and presentation of complex materials.”

Quoted from the review of the National World War I Museum Interactive Exhibit upon winning the HOW, Interactive Design Award 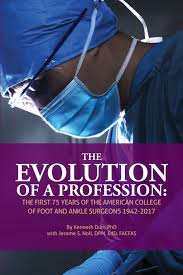 The Evolution of a Profession

The Evolution of a Profession conveys in easily comprehensible terms the challenges and rewards involved in creating institutions such as a respected professional journal and a national accreditation group. The narrative augments explanations of technological and regulatory change with vivid profiles of leaders past and present who sacrificed time and energy for their fellow practitioners, building the organization, establishing surgical training courses, seeking hospital privileges, and fighting credentialing and scope of practice battles nationwide.

Published in a split run of hardback and paperback books, with ample illustrations and appendices, 7”x10” with index, 188 pages.