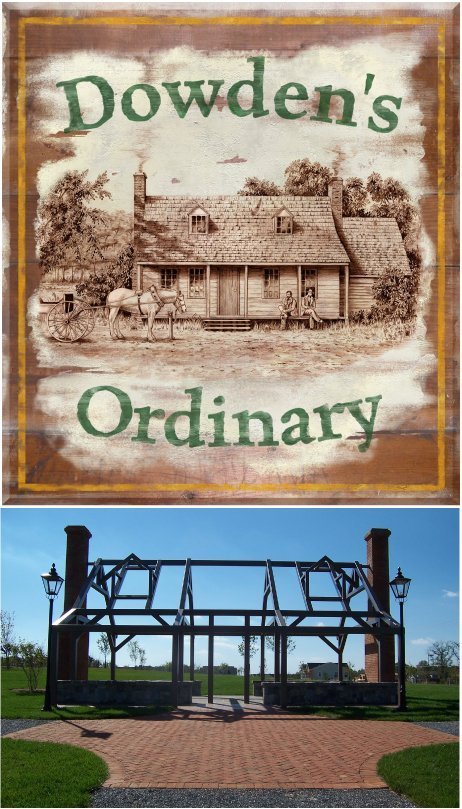 Dowden’s Ordinary is a local park in Clarksburg, Maryland, featuring a “ghost” structure outlining the tavern that served as inspiration for the park site. Photos courtesy Montgomery County Department of Parks.

Take Clarksburg, Maryland, for example. Founded in the mid-1700s, the town seemed destined for greatness, situated as it was on the main highway between Frederick Town and Georgetown. But in the mid-1800s the railroad passed it by and Clarksburg settled into rural obscurity, its old landmarks overlooked. Then in the 2000s, the Washington, D.C. suburbs began to reach Clarksburg. Marketing Specifics, a specialist in real estate messaging, turned to History Associates to draw attention to those old landmarks, add authenticity to its branding efforts, and help a new generation of residents discover what’s in a name.

In stories and pictures, History Associates helped Marketing Specifics reclaim old landmarks to create new community branding for the 21st century. Our research, for example, turned up a photograph of an African-American string band whose members lived at a nearby crossroads. Their neighborhood was dubbed “Stringtown,” and we found their photograph in an archive, labeled “Stringtown Band.” We also located a photograph of Clarksburg’s oldest landmark, Dowden’s Ordinary (an ordinary was a tavern that sold fixed price meals) built in 1754 on the Georgetown Pike. Today, signage and new place names informed by our research ensure that Clarksburg locals and commuters alike have a deeper appreciation for landmarks like Stringtown Road and Dowden’s Ordinary Park.

While there are gems in the mines of historical memory, there are perils as well. In 2018, a real estate firm was planning a major redevelopment project in a well-known section of a mid-Atlantic city. Like most locals, those preparing to tell the old story of the new neighborhood assumed that the area had adopted the surname of a prominent late 18th century settler. Recent controversies about Confederate memorials, however, compelled the real estate firm’s communications team to make sure that the area was not named after a notorious rebel general. The team approached History Associates to review the record and provide historical assurance about what was in this particular name.

After consulting archives, books, and articles, History Associates provided a report documenting with certainty that the area was named for the late 18th century settler rather than the confederate general. Our report also provided additional background material about the founder so that communicators could be ready if new questions about the neighborhood’s old namesake arose.

Whether building on rural farmland or rebuilding in an urban enclave, real estate developers never start fresh. Doing development right means you must recognize and accentuate the lasting traces of earlier times and make sure that you know the whole story before you start. In other words, it is a good idea to know what’s in a name—and that’s where History Associates can help.