The Founder and President, E. Renee Ingram, was driven to save her family cemetery, the historic Stanton Family Cemetery, in Central Virginia, from a state highway improvement project that would have impacted the site. Working with community and state officials, her family was able to preserve the 49 burials and have the state highway department realign their improvement plans. Ingram’s passion reached beyond her family’s victory and she embarked on a mission advocating for the preservation of endangered African American sites across the country.

Now AAHFP locates, registers, and shares information for saving as many notable endangered African American Historic Sites as possible. Here’s a list of many of those sites. 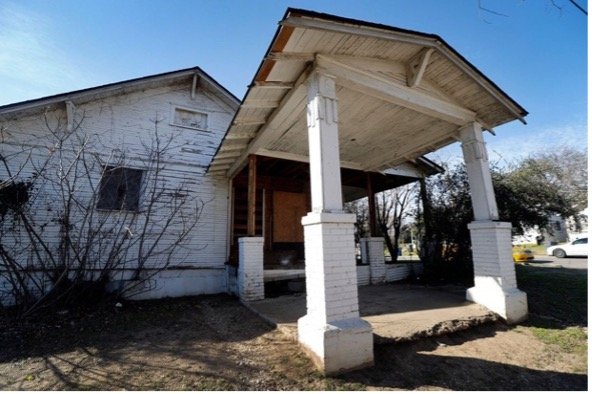 Tenth Street Historic District, an extensive settlement that began when T.L. Marsalis platted the neighborhood in 1890, is one of the only remaining intact Freedman’s Towns in the nation. It is a cohesive collection of modest folk and vernacular dwellings dating from the late nineteenth to early twentieth centuries. In this neighborhood there are 257 domestic structures, four commercial structures, three institutional structures and one cemetery. The Tenth Street District was adopted as Dallas’ 12th historic district in 1993 and was placed on the National Register of Historic Places in 1994. Contributing structures in the 1993 ordinance designating this district as historic have vanished because of court-ordered demolitions. For more information, contact: Dallas City Hall, Historic Preservation Section

The Asbury United Methodist Church, celebrating 150 years on Savannah’s Abercorn Street, stands as the only African American United Methodist church in the Historic Victorian District. The church building faces many needed repairs to continue serving its community. The sanctuary remains in regular use but lack of accessibility inhibits some congregants’ attendance. Deterioration due to water intrusion has also left many portions of the building unusable. Faced with the choice of remaining in the historic building or seeking a new place of worship, the church is determined to raise the necessary funds to stay. For more information contact: The Georgia Trust for Historic Preservation

The First Zion Baptist Church is a contributing building in the Harpers Ferry Historic District in Harpers Ferry, West Virginia. It is located on West Ridge Street behind the Harpers Ferry Town Hall. The African-American congregation built the church, which was a keystone meeting place for the community that developed around the historic African American Storer College. In February 2017, the Harpers Ferry-Bolivar Historic Town Foundation purchased the building with hopes to preserve its historical significance while re-using the structure as a secular community cultural center that celebrates the African American heritage of the area. The Town Foundation needs immediate fundraising help for the preservation of the structure. For more information contact: Harpers Ferry-Bolivar Historic Town Foundation.

The Bethlehem Methodist Episcopal Cemetery was established ca. 1875 in Archer, Florida, as part of a church built by freed slaves. The church has since been demolished, but many historic gravestones and markers remain on site. After years of irregular maintenance, the Bethlehem Methodist Episcopal Cemetery Restoration Committee was formed to document, restore, and research the markers. After initial progress by the committee, the property is now threatened by loss of momentum in its preservation efforts. The City of Archer has agreed to partner with the Bethlehem Methodist Episcopal Cemetery Restoration Committee and the University of Florida Historic Preservation Program to apply for funding. For more information contact: Florida Trust for Historic Preservation

Morningstar Tabernacle No. 88 Order of Moses Cemetery and Hall were established around 1885 in a post-Emancipation Black settlement known as Gibson Grove in Cabin John, Maryland. Today, building foundations are all that remain of Moses Hall, and the planned expansion of the Washington, D.C. Capital Beltway further threatens the cemetery of known burials spanning from 1894 to 1977. A coalition of neighbors and descendants is leading the effort to save this site and is advocating that the proposed Capital Beltway expansion avoid the cemetery and hall site. Morningstar Tabernacle No. 88 Order of Moses Cemetery and Hall was placed on America’s 11 Most Endangered Historic Places in 2021 by the National Trust for Historic Preservation. For more information contact: Friends of Moses Hall

A National Historic Landmark, Fountain Hall was built in 1882 and features an iconic clock tower that still stands over the city of Atlanta, Georgia. It remains the most prominent building on the original campus of Atlanta University, which was founded in 1865 to educate newly emancipated African Americans. Boarded up and unused since 2003, Fountain Hall has fallen victim to vandalism. Also, an intrusion of weather and lack of upkeep has resulted in an increasingly compromised structure. Left unattended, the building could face a similar fate to its historic neighbors, Gaines Hall and Furber Cottage, both severely damaged by fire in recent years. For more information contact: The Georgia Trust for Historic Preservation

How you can help

The threats that many of these sites have in common include neglect, deterioration, environmental hazards, lack of financial resources, as well as proposed infrastructure projects that negatively impact their respective communities.

However, AAHPF has established the African American Historic Preservation Bricks & Mortar Grant Fund to support the preservation and restoration of endangered African American historic properties. This fund will also allow communities to rehabilitate, protect, and foster economic development of these sites within their respective communities.

AAHPF’s initial fundraising goal for the fiscal year 2022 is $250,000. A maximum of 4 grants per year will be granted to eligible organizations. The Historic Preservation Bricks and Mortar Fund grants can be matched with other historic preservation grant programs. AAHPF’s campaign is being developed by their Philanthropic Consultants and HAI partner, Compass Point Capital.

Historic Preservation is a highly effective response to the challenge of supporting African American communities. Let’s do this together!

To Contribute or Learn More, Visit: www.aahpfdn.org or Contact: contact@aahpfdn.org