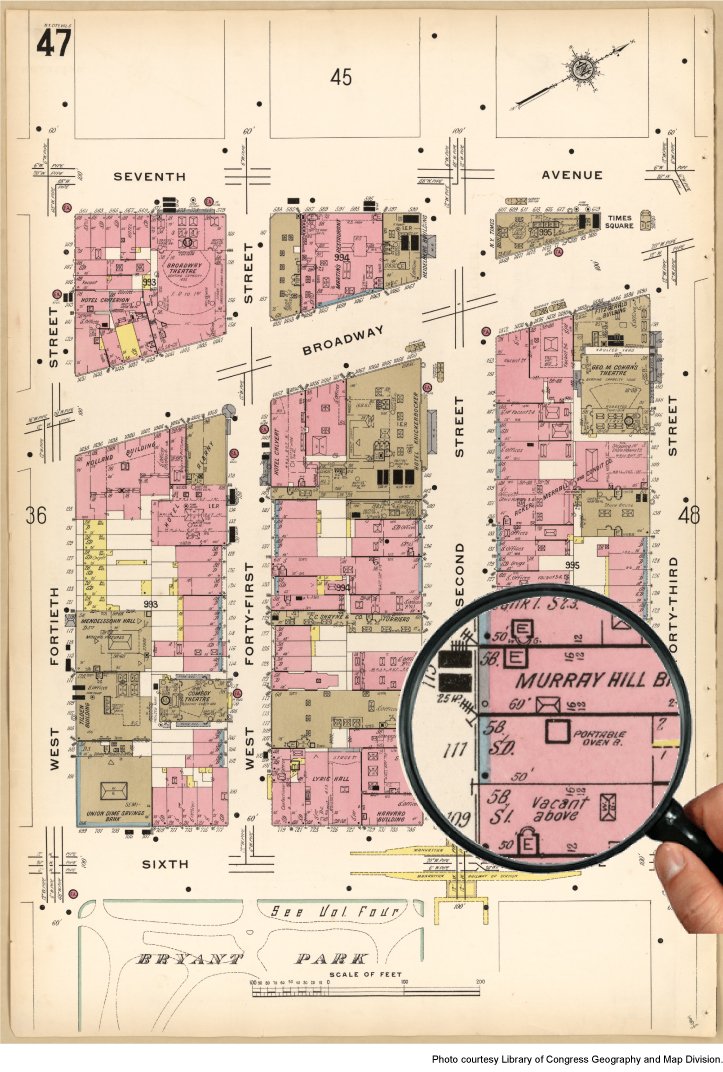 For a historian, a good map can be a gold mine of valuable information. Beyond road names or topographical features, maps can show the historical arrangements of buildings, property owners, and even the location of a specific furnace in an industrial plant. Few maps do this better than Sanborn fire insurance maps, which depict the commercial, industrial, and residential sections of more than 12,000 American cities and towns from ca. 1867 to 1970.Fire insurance maps were developed in the United States in the mid-19th century in response to the insurance industry’s need to assess fire risks. Underwriters had previously inspected properties themselves, but as cities expanded, this system became impractical. As a result, several companies, among them the D. A. Sanborn National Insurance Diagram Bureau, began creating maps designed to assist insurance agents. By 1902, the newly renamed Sanborn Map Co. had monopolized the industry, making “Sanborn map” synonymous with “fire insurance map.”

The Sanborn Map Co. prepared its maps with an army of surveyors traveling from town to town, literally working from strangers’ backyards (although surveyors were told to contact the police station first, stories abound of surveyors being thrown in jail, attacked by dogs, or reported as spies). Relying heavily on their “Surveyors’ Manual,” surveyors recorded careful notes and diagrams that were then developed into intricately drawn, hand-colored maps that have become invaluable to historians.

For some towns, the Sanborn Map Co. prepared new maps as often as every five years, making them one of our best sources for showing change over time at specific sites. Sanborn maps tell the careful observer everything from which way the prevailing wind blows to the location of historical waste pits. Sanborn maps are important to site-specific research, allowing historians to approximate when a particular building was torn down or how many oil tanks were on a site in a particular year. Sanborn maps can also be used for broader, investigative research: by looking through a range of maps in a particular region, historians can track the progression of a specific industry, identify economic development, and even gain new insight into social change.

Sanborn maps have their limitations, however, and those unfamiliar with them may make some false assumptions when using them as a resource. Here are a few of the common “myths” about Sanborn maps:

Myth: Only towns of a certain size were mapped.

While major cities were certainly covered by Sanborn surveyors, even tiny villages show up among the Sanborn annals. In fact, small towns were sometimes mapped more frequently than large cities. Syracuse, New York, for example, received no Sanborn updates at all between 1892 and 1910, while Manlius, a nearby village of about 1,000 residents, was mapped four times. One reason for this historical discrepancy may simply be that mapping a major city was time-consuming and expensive. Whatever the explanation, Sanborn surveys were not determined by population, but rather by the demands of the insurance industry.

Myth: Every Sanborn map of an area is similar.

While two different repositories may have a 1928 Sanborn map of Brooklyn, it is possible that one atlas may show a vacant lot where the other shows a shopping center. This is because during economic difficulties in the 1920s, the Sanborn Map Co. began updating maps by pasting correction slips on top of existing maps, rather than printing an entirely new map. For some cities, as many as 50 or 60 rounds of corrections were made during the next few decades. Over the years, pages grew heavy with correction slips, making it impossible to tell which slips were added in which years. Among the Sanborn maps and atlases that exist in repositories today, some have been “corrected” while others have not. History Associates has found that local repositories are particularly likely to have the “corrected” version of the maps.

Myth: Sanborn maps were only used by the fire insurance industry.

Although insurance companies were the main consumers, city planners, government and municipal agencies, banks, and public utilities also purchased Sanborn maps and atlases. Occasionally, the Sanborn Map Co. even made specialized maps for private companies. In 1952, Business Week reported that the Sanborn Map Co. was working on a project to show Safeway food stores where to expand. In the early 1940s, the U.S. Census Bureau purchased 1,840 volumes of Sanborn atlases and maps to serve as the cartographic base for their statistical and sampling surveys. This collection was transferred to the Library of Congress in 1967, where it remains as the largest publicly accessible collection of Sanborns in the country.

Creative research can uncover a wealth of information in records that were intended to serve a different purpose, and historians often find valuable information from unexpected sources like the Sanborn maps. However, it is equally important to understand the context of that resource to ensure an accurate interpretation of the information once it is found.