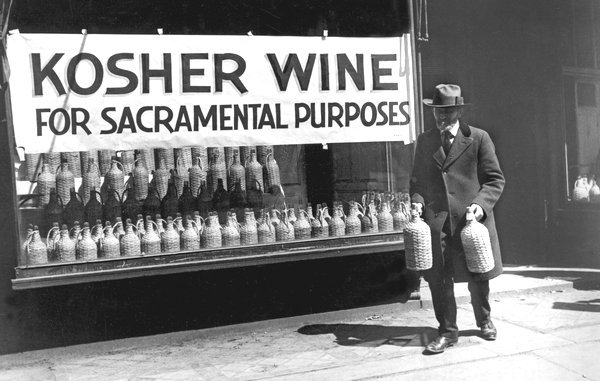 One hundred years ago, the United States was months into a “noble experiment”—Prohibition. Officially in effect as of January 17, 1920, the nationwide prohibition on the manufacture, sale, and transportation of “intoxicating liquors” conjures up images of back-alley speakeasies, flappers and mobsters, and bathtubs full of gin. Opportunists seized the moment, often with tremendous success.

But for every gangster and bootlegger, there was a distiller or winemaker faced with economic ruin. We know the alluring stories of crime and corruption, but many others found clever ways to operate within the confines of the law. These lesser-known methods are not as notorious—nor as bloody—but captivate us nonetheless.

Here’s a law-abiding citizen’s guide to making a buck during Prohibition.

The 18th Amendment to the United States Constitution prohibited the manufacture, sale, and transportation of alcohol; the Volstead Act, passed in October 1919, enforced it. But the Volstead Act made exceptions for alcohol used for religious or medicinal purposes, and Americans took note.

Prohibition threw the California wine industry, which had begun to flourish at the turn of the century, for a loop. At first, demand for grapes skyrocketed, as home winemaking became a popular alternative to store-bought wine. Over time, however, supply outpaced demand and the price of grapes plummeted. Many wineries closed their doors permanently. In the Los Angeles area alone, only about half a dozen of the 90 wineries in the region survived.

The winemakers who did outlast the 13-year dry spell often did so by producing sacramental wine for churches and synagogues. This was true of Beaulieu Vineyards in Napa Valley, which rebranded itself as “The House of Altar Wines.” Beaulieu’s proprietors obtained government permits to produce wine and shipped their lucrative libations in barrels marked “FLOUR” to protect it in transit. According to the vineyard’s website, sales to the Catholic Church increased Beaulieu’s business fourfold.

Because wine plays an important role in Jewish and Catholic rituals, lawmakers made an exception in the Volstead Act for the production and sale of sacramental wine. This loophole was quickly exploited. Source: Underwood Archive and The Oakland Tribune via Newspapers.com 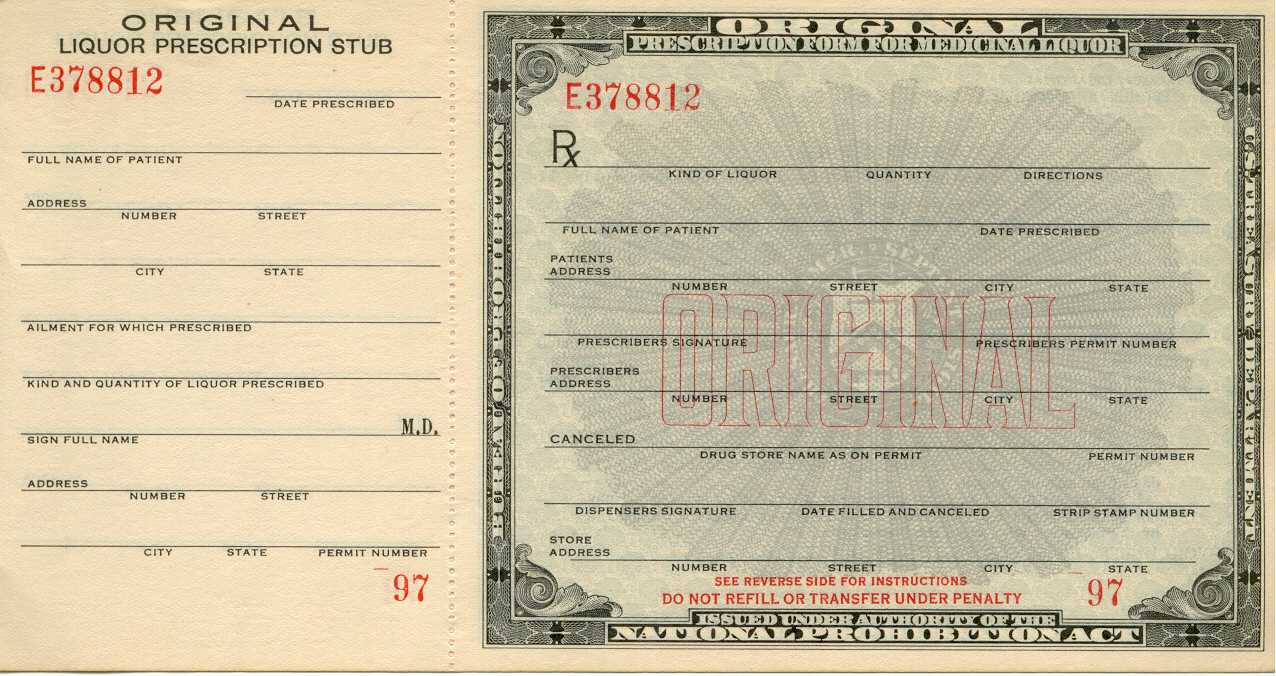 Although the American Medical Association declared that alcohol had no proven therapeutic value in 1917, the longstanding belief in its medicinal qualities persisted throughout Prohibition, as evidenced by government-issued prescription forms like this one. Source: Wikimedia

Meanwhile, because priests and rabbis could legally possess and serve sacramental wine during Prohibition, congregations grew overnight—as did the number of people claiming to be priests and rabbis. In the San Francisco area, this type of fraud became so prevalent that the Conference of Jewish Organizations spoke out against it, vowing to “suppress the activity of fake congregations and pseudo rabbis.”

Medical exemptions also gave eager tipplers access to booze. Armed with government-issued prescription pads, doctors advised their patients to treat a range of ailments—from asthma and diabetes to cancer and depression—with alcohol. People eagerly paid physicians and pharmacists a few extra dollars for a pint. Historians suspect that the windfall from the sale of medicinal liquor explains how the drugstore chain Walgreens expanded from 20 to 525 stores during the 1920s.

Innovation also helped distillers, brewers, and winemakers survive Prohibition. Brewers produced soft drinks, coffee and tea products, malted beverages, infant formula, and even “near beer” with less than 0.5% alcohol. Others stayed afloat by pivoting to other industries—Anheuser Busch and Yuengling, for instance, both began to produce ice cream, as they already had refrigeration equipment on hand. Coors shifted to pottery and ceramics. 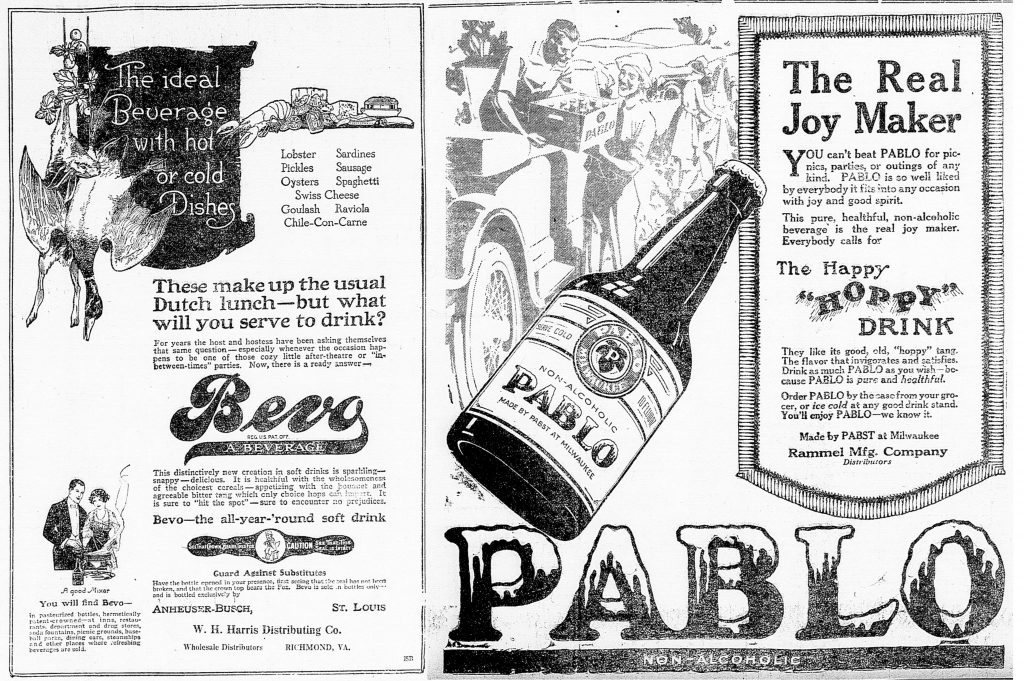 Although “near-beer” didn’t enjoy as much popularity as its fully alcoholic relative, some companies had success with these products. These advertisements tout the “delicious,” “pure,” and “healthful” qualities of Anheuser-Busch’s “Bevo” and Pabst’s “Pablo.” Source: The Alexandria Gazette via the Library of Congress

Enterprising winemakers also introduced a novel product to the marketplace: wine bricks. These blocks of concentrated grape juice came in varieties such as port, claret, riesling, and burgundy—and with warnings that they were intended for non-alcoholic consumption only. Do not dissolve in water and leave in the cupboard to ferment for 21 days, labels insisted, or your innocent grape juice would turn into wine. 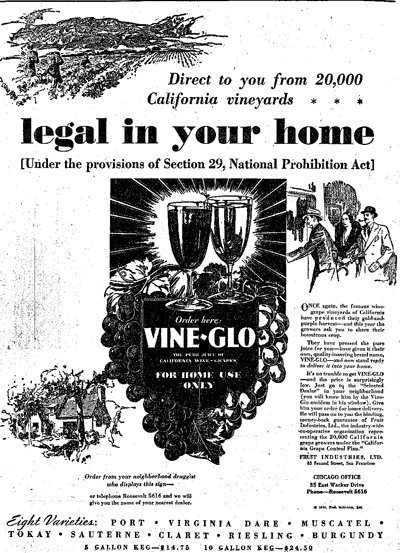 Producers could stay within the confines of the law as long as they advertised wine bricks for at home, non-alcoholic consumption only. Source: Vinepair

Become President of the United States

Under Prohibition, it was not technically illegal to keep the alcohol you already owned, which was good news for President Woodrow Wilson. While Wilson declined to take a stance on the controversial issue of prohibition during the 1916 election campaign, he firmly supported civil liberties and Congress had to override his veto to pass the Volstead Act. He also had an extensive wine cellar. When it came time for Wilson to leave the White House in 1921, he faced a dilemma: how to transport his wine collection to his nearby home, when to do so would be illegal? Wilson ultimately received special permission from Congress to move his wine with the rest of his possessions—an undeniable perk of being president. 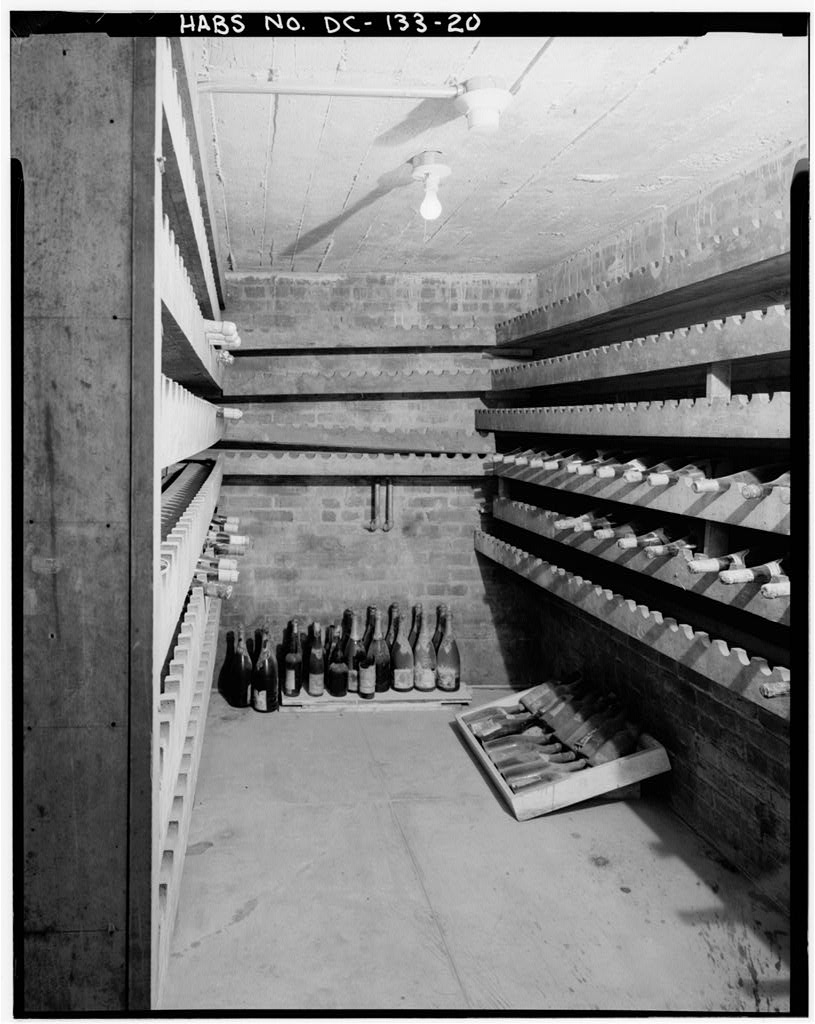