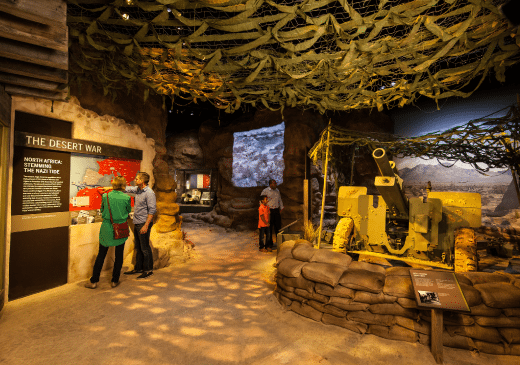 On June 6, 1944, thousands of Allied troops stormed the beaches of Normandy in what would become a turning point of the Second World War. There are many ways to portray this pivotal moment, but eyewitness accounts, photographs, and artifacts only tell part of the story. Maps, however, can tie these pieces together, adding a visual layer to the historical narrative that conveys a great deal of content in an effective, comprehensible way. A map of Europe on D-Day, for instance, shows a near-solid wall of Nazi occupation stretching across Europe. Allied blue appears only on the periphery. It puts D-Day in perspective, impressing viewers with the enormity of the Allied task. 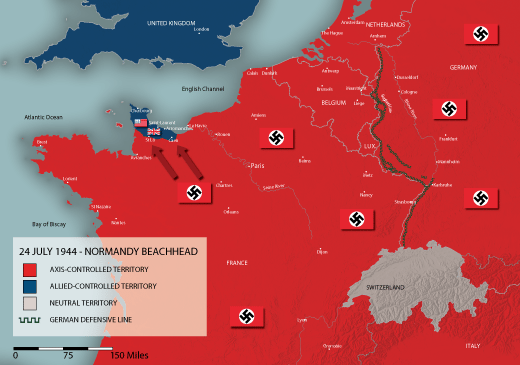 This map illustrates what the Allied forces were up against, depicting Allied and Nazi territory right after the Normandy Invasion, 24 July, 1944.

The above map is one of over two dozen maps that History Associates created for the National World War II Museum in New Orleans. The maps are an integral part of the newly-opened Road to Berlin exhibit, providing a vivid illustration of the Allied campaign to reclaim North Africa and Europe. Here is a glimpse of the process, and how a historian can become a cartographer.

Maps are an integral part of the newly-opened Road to Berlin exhibit, providing a vivid illustration of the Allied campaign to reclaim North Africa and Europe. Image Courtesy of The National WWII Museum.

Creating highly detailed and accurate maps requires a great deal of technical skill and research. We use specialized software that imports Geographic Information System (GIS) data, bytes of digital geographic information that act as the starting point for our work. GIS technology allows us to pinpoint exact locations, generate scale bars, and add in “georeferenced” layers such as rivers, lakes, or shaded relief terrain.

Historical research, however, is just as important to the process. In the 1940s, European countries did not look the way they do today, so you cannot use contemporary borders found in GIS datasets to tell an accurate story. To create the maps for exhibits like the National World War II Museum, we redraw country borders to reflect the true size and shape of each country at a particular moment in time. In-depth research also guides the content of each map, informing the placement of armies, the location of front lines, the identification of Axis- and Allied-occupied countries, and much more. Not all sources, however, include the level of detail we wish to convey. Many of the historical and military maps we referenced for our depiction of Operation Market Garden – a major airborne operation in 1944 – included only one general drop zone for Allied paratroopers. Deeper research into textual sources pointed to a more detailed depiction of multiple concentrated drop zones within that general area.

We also consider the map in the context of the exhibit, asking, “Does this visual add to the story? Does it make content easier for a visitor to understand?” The map below does just that. It provides the visitor with a powerful visual aid, conveying the dramatic final days of the war as the Allies pushed into Germany in April 1945. Under tremendous pressure from the east and the west, Nazi Germany was clearly on the brink of collapse. 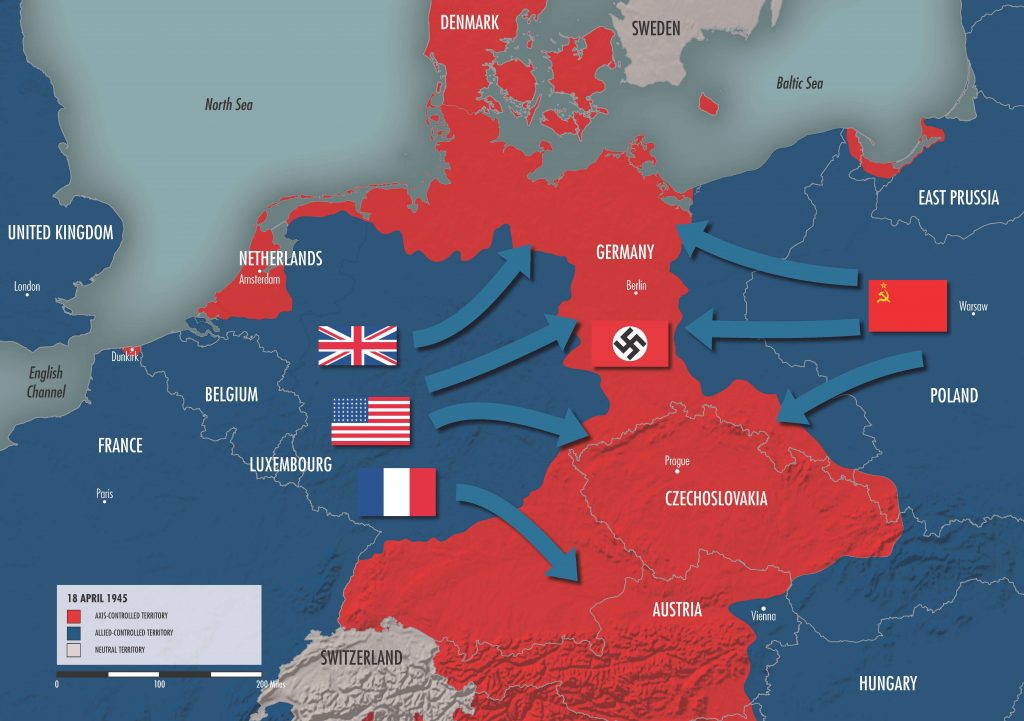 This map shows the Allied forces closing in on Germany in April 1945.

This is a brief glimpse at a complicated, but worthwhile, process. When created with care and precision, customized maps become storytelling devices that add great depth to museum exhibits, interpretive sites, and smartphone apps. They can help show how D-Day – a moment that, in retrospect, appears triumphant – was just the beginning of a tremendous struggle to retake Europe, but ultimately one that succeeded when, nearly a year later, the Allies closed in on what remained of Nazi Germany.