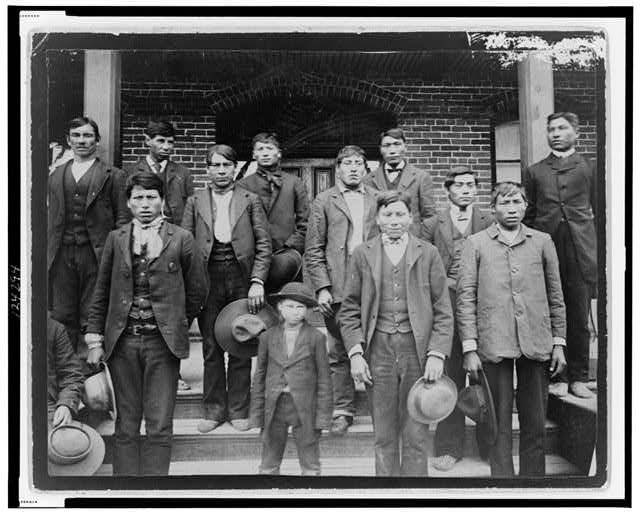 Now, as a result of the findings at Canadian schools, United States Interior Department Secretary Deb Haaland, the first Native American person to serve as a cabinet secretary, announced an investigation into the American Indian boarding school system the DOI oversaw for over a century.

What were American Indian boarding schools, and what purpose did they serve?

American Indian boarding schools, which operated across the United States beginning in the late nineteenth century, represent a dark chapter in American history. Also called industrial schools, these institutions prepared boys for manual labor and farming and girls for domestic work. The boarding schools, whether on or off a reservation, carried out the government’s mission to restructure Native Americans’ minds and personalities by severing children’s physical, cultural, and spiritual connections to their tribes. 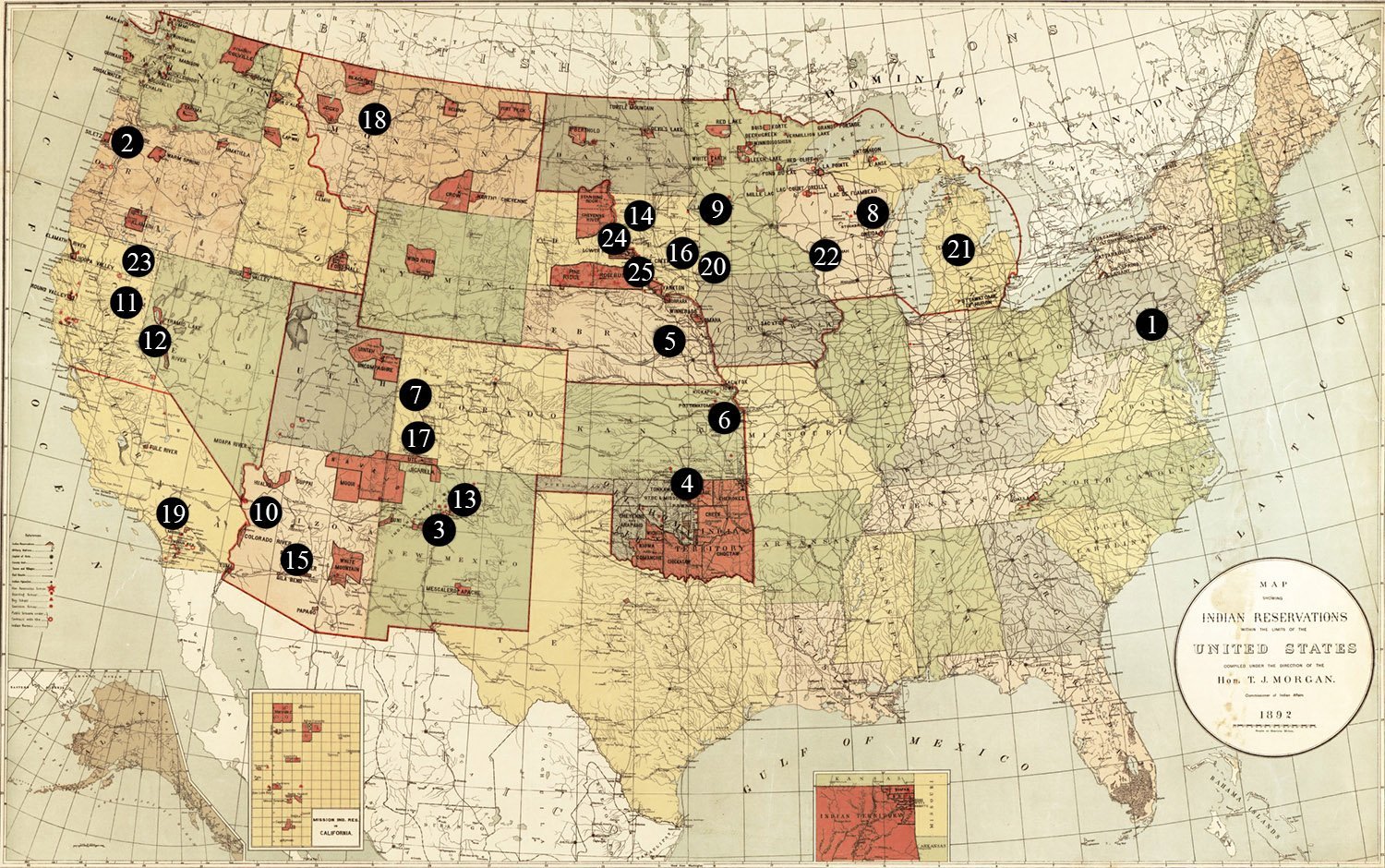 The boarding school system dates back to the mid-nineteenth century, when Indian Agents—federal representatives responsible for carrying out policy toward Native Americans—forcibly abducted children as young as four from their homes and enrolled them in church- and government-run boarding schools, often far-removed from their tribes and families. 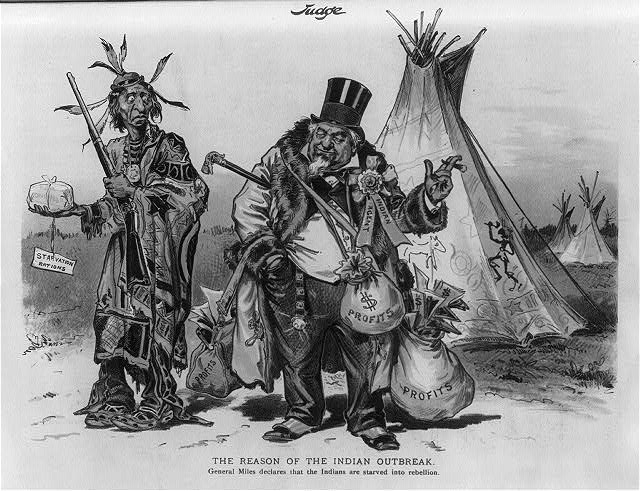 While this cartoon relies on stereotypical imagery, it correctly points out that some Indian agents were corrupt and skimmed off the top of government-provided annuities or colluded with white settlers to steal Native American land. Source: Library of Congress.

Then-Lieutenant Richard H. Pratt, a veteran of the post-Civil War conflicts between the United States government and Native American tribes, created the template for those federal boarding schools when he founded the Carlisle Indian Industrial School in 1879. After teaching captives from the Indian wars about American culture and how to speak English, Pratt became a staunch assimilationist. He believed that the federal government could and should “Americanize” Native Americans. To this end, he offered a variation of the offensive slogan—popular in the American West—that stated the only good Indian was a dead one. Instead, the proper goal, Pratt claimed, was to “kill the Indian…and save the man.”

Against Native American cultural customs, male students at the Carlisle Indian Industrial School were required to cut their hair short in line with white Western standards. Source: Library of Congress.

Pratt founded the Carlisle Indian Industrial School at the site of an unused cavalry barracks at Carlisle, Pennsylvania, organizing the institution along rigid military lines. Pratt’s program of half days in the classroom and half days spent at performing some sort of manual labor soon became the standard Indian boarding school curriculum. Government expenditures for boarding schools were always small, and the schools exploited the free labor of Native American children to function.

A typical daily schedule began with a wake-up call at 5:45 AM, most often announced by a bugler or bells. Students marched from one activity to the next. Every minute of the day was scheduled: mornings began with making beds, brushing teeth, breakfast, and industrial call (assigned labor details). School began around 9 AM. Afternoons were spent in school and industrial work, which were followed by supper, up to thirty minutes of recreation, a call to quarters, and “tattoo.” Pupils retired to the sounds of taps at 9 PM.

Methods of discipline at Indian boarding schools were harsh. Some schools had cells or dungeons where students were confined for days and given only bread and water. One forced a young boy to dress like a girl for a month as a punishment; another cut a rebellious girl’s hair as short as a boy’s. A former student recalled being punished by being made to chew lye soap and blow bubbles that burned the inside of her mouth. This was a common punishment for students if they spoke their tribal language.

Boarding school staff assigned students to “details”: working in the kitchen, barns, and gardens; washing dishes, tables, and floors; ironing; sewing; darning; and carpentry. The schools also used an “outing” program that retained students for the summer and involuntarily leased them out to white homes as menial laborers.

Many students’ parents and relatives resisted the boarding school system. In letters sent to absent children, they delivered news from home and tried to maintain family ties. In messages sent to school administrators, they arranged visits, advocated for improved living conditions, and reported cases of malnourishment and illness.

The Legacy of the US Native American Boarding School System

In 1928, the U.S. government released the Meriam Report, an evaluation of conditions on Native American reservations and in boarding schools. The critical study called the schools grossly inadequate. It presented evidence of malnourishment, overcrowding, insufficient medical services, a reliance on student labor, and low standards for teachers. As a result, the government began to build day schools on reservations instead. The original boarding schools began closing their doors as parents increasingly kept their children at home. By the end of the 1970s, most of the boarding schools had shut down. 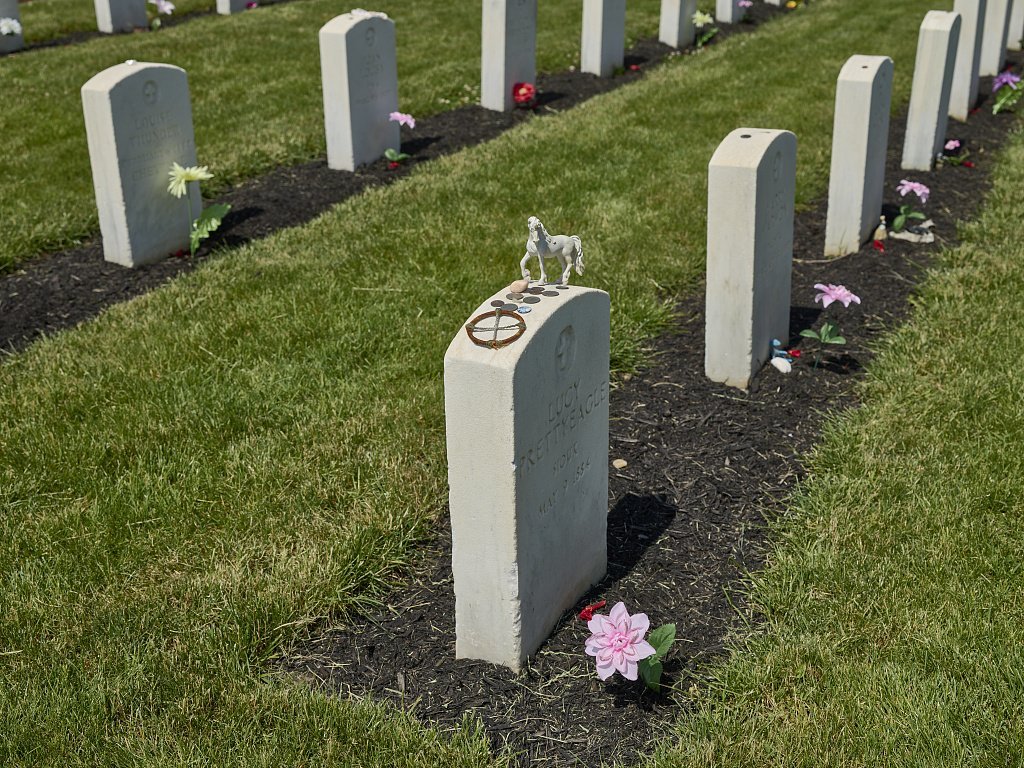 Gravestones of American Indians, including The Carlisle Indian School has a cemetery where at least 186 individuals were interred between 1880 and 1918—including several students. Source: Library of Congress.

There has been scant recognition of the boarding school era by the U.S federal government and the religious groups that created and ran the boarding schools. Neither has accepted responsibility for the ill effects of Indian boarding schools or acknowledged that the schools’ purpose was cultural genocide, as the Canadian government did for its own boarding school program in 2008. Pratt’s contemporaries viewed him and other enforcers of assimilationist policies as heroes, but the parties responsible for the schools have done little to condemn these efforts in the present.

The genocidal policies school staff and administrators carried out aimed to destroy the essential foundations of the lives of Native American students and, by extension, that of their families. Their objective was the disintegration and destruction of the culture, language, and spirituality of the children in their care. The policies they implemented led to the deaths of thousands of students through disease, hunger, and malnutrition, and have left a legacy of intergenerational trauma and unresolved grieving in many boarding school survivors and their families in Native American communities across the country. The DOI investigation cannot undo decades of federally-sanctioned abuse, but perhaps it can shed more light on it.

Chronicling Health and History: HAI’s Decades-Long Collaboration with the NIH
The Capitol Has Fallen! When the British Burned the Capitol Building
The History and Use of the Defense Production Act
Contested Transition: Lincoln’s Victory and the Coming of the Civil War