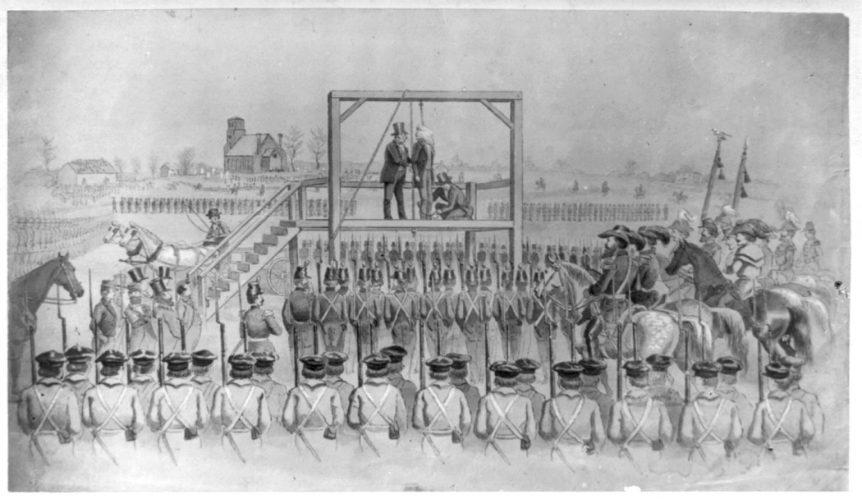 This is part two of a three-part series on John Brown. If you haven’t already, read the first blog, describing the raid on Harpers Ferry, here. 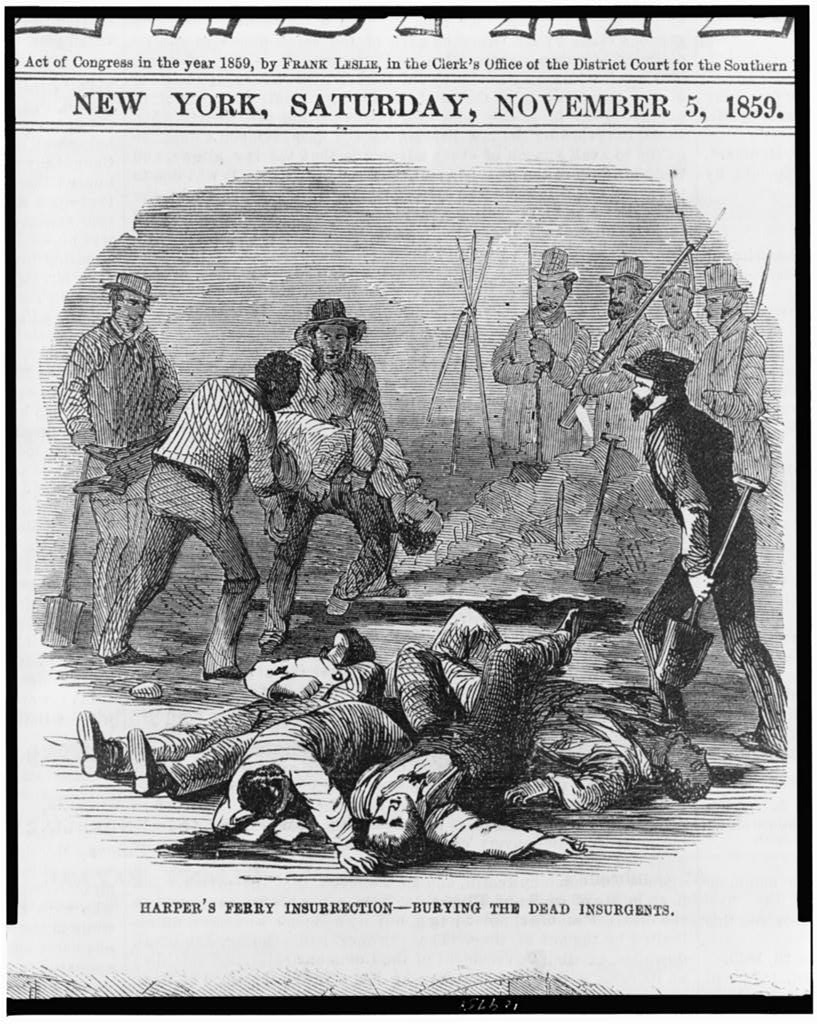 This newspaper sketch shows the burial of some of Brown’s followers after the raid. Their families attempted, with varying levels of success, to retrieve their remains and give them proper burials. Source: Library of Congress

John Brown and other captured raiders would spend the rest of their numbered days in the Charles Town jail and courthouse. They had failed in their mission as liberators. Now, their fates rested in the hands of a local jury which included some of the enslavers that they had hoped to make war on. The raiders who escaped went into hiding in the North, ever fearful of being arrested and sent back to Virginia. The raid had drawn national attention, and reporters flocked to the area to report on the trial. Slave revolts, such as Nat Turner’s Rebellion, had broken out before, but the raid on Harpers Ferry represented a different kind of threat to slavery, Black and white abolitionists arriving from the North to arm enslaved people. Brown lay on a cot throughout most of the proceedings, still recovering from his wounds.

Brown’s lawyers attempted to save him from the gallows by pleading insanity. Earlier in the year, the claim of temporary insanity had helped acquit Congressman Daniel Sickles on the charge of murdering his wife’s lover—his lawyers argued that he temporarily lost control of his passions. Brown’s lawyers argued that there was a history of mental illness in Brown’s family and that illness, rather than pre-meditated malice, had driven his actions at Harpers Ferry. Brown, however, openly contradicted these claims, declaring his sanity to the court (Brown would go through several lawyers during his trial). To this day, it remains unclear if Brown actually suffered from mental illness.

Pleading mental illness represented Brown’s best hopes of escaping the gallows, and historians continue to debate why he deliberately undercut his lawyers. Some argue that, because the raid failed, Brown saw execution as a way to make himself a martyr to the anti-slavery cause, stating “I am worth inconceivably more to hang than for any other purpose.” A plea of insanity would undercut that, transforming popular perceptions of Brown from a man willing to die to end slavery into a lunatic who could not control his emotions. 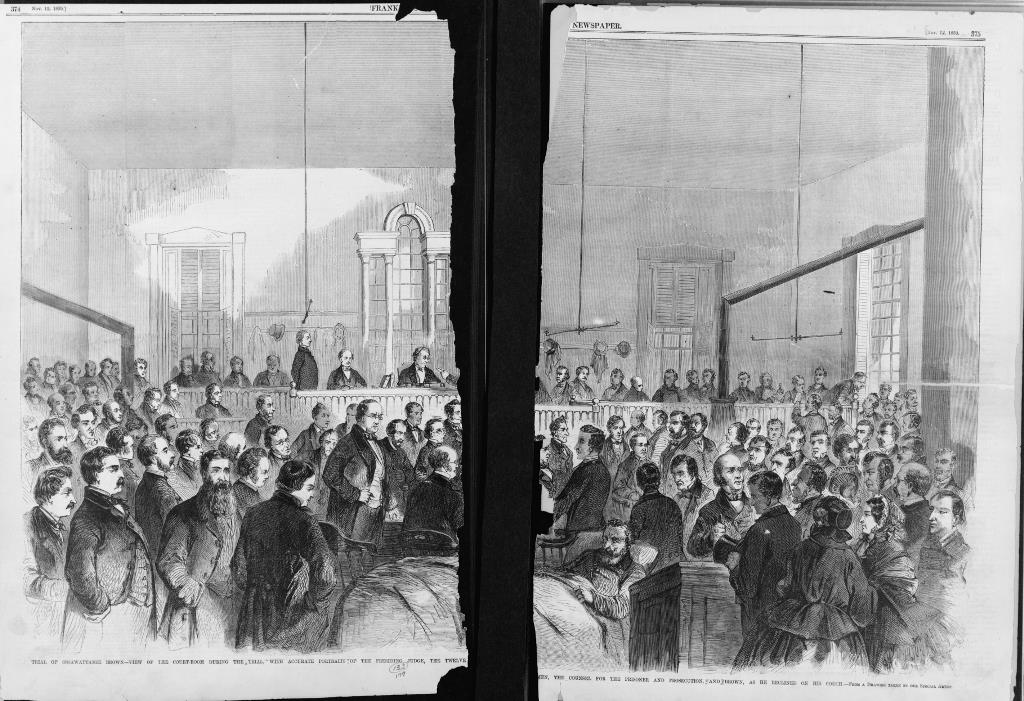 A sketch of the trial of John Brown. Brown can be seen lying on a cot at the center of the image. Source: Library of Congress

The courthouse in Charles Town. Before the Civil War, the front steps were often used for slave auctions. Source: Library of Congress

Whatever his intentions, Brown’s actions reflected a larger fight over the goals and meanings of the Harpers Ferry raid. Pro-slavery and secessionist advocates used the event to argue that the North was full of violent abolitionists determined to destroy the South. Many Northern abolitionists, even if they refused to fully embrace Brown’s actions, still heralded the raid as a powerful, if symbolic, blow against slavery. As these fights continued, Brown sought to influence the narrative, emphasizing his goal of freeing slaves, and deemphasizing the violent outcome of his plot. In a speech to the court, he reimagined the raid as an elaborate expedition to free slaves and then move them to Canada, rather than a process of gathering an army strong enough to compel the end of slavery in the United States. He would later further revise this explanation in conversations after his sentencing, saying that he only wanted to help enslaved people “defend their liberties…without any bloodshed.” After a short trial, the jury found Brown and his surviving raiders guilty on three counts: murder, treason against the state of Virginia, and inciting slaves to revolt and sentenced them to death.

As they awaited their fates, the raiders continued their efforts to shape the meaning of the raid. John Anthony Copeland, a free Black man who joined Brown, wrote to his brother from prison that the attack on Harpers Ferry amounted to a second American Revolution designed to fulfill the promises of 1776. “Could I die in a more noble cause?” he mused. Brown himself, addressing the court after his sentencing, declared that his motivations came from the Bible, “which teaches me that all things whatsoever I would that men should do to me, I should do even so to them.” Although Brown’s religious beliefs were strong, the line might also have been meant to appeal to a deeply religious American public.

In jail, the prisoners received numerous letters from both admirers and detractors. One Quaker woman wrote to Brown, telling him she believed he was doing God’s work and compared him to Moses, her pacifist beliefs notwithstanding. By contrast, a letter from Mahala Doyle stated, “Altho’ vengeance is not mine, I confess that I do feel gratified to hear that you were stopped in your fiendish career at Harpers Ferry.” Brown had killed her husband and two of her sons during the Pottawatomie Creek Massacre and had almost killed a third before sparing him because of his young age. 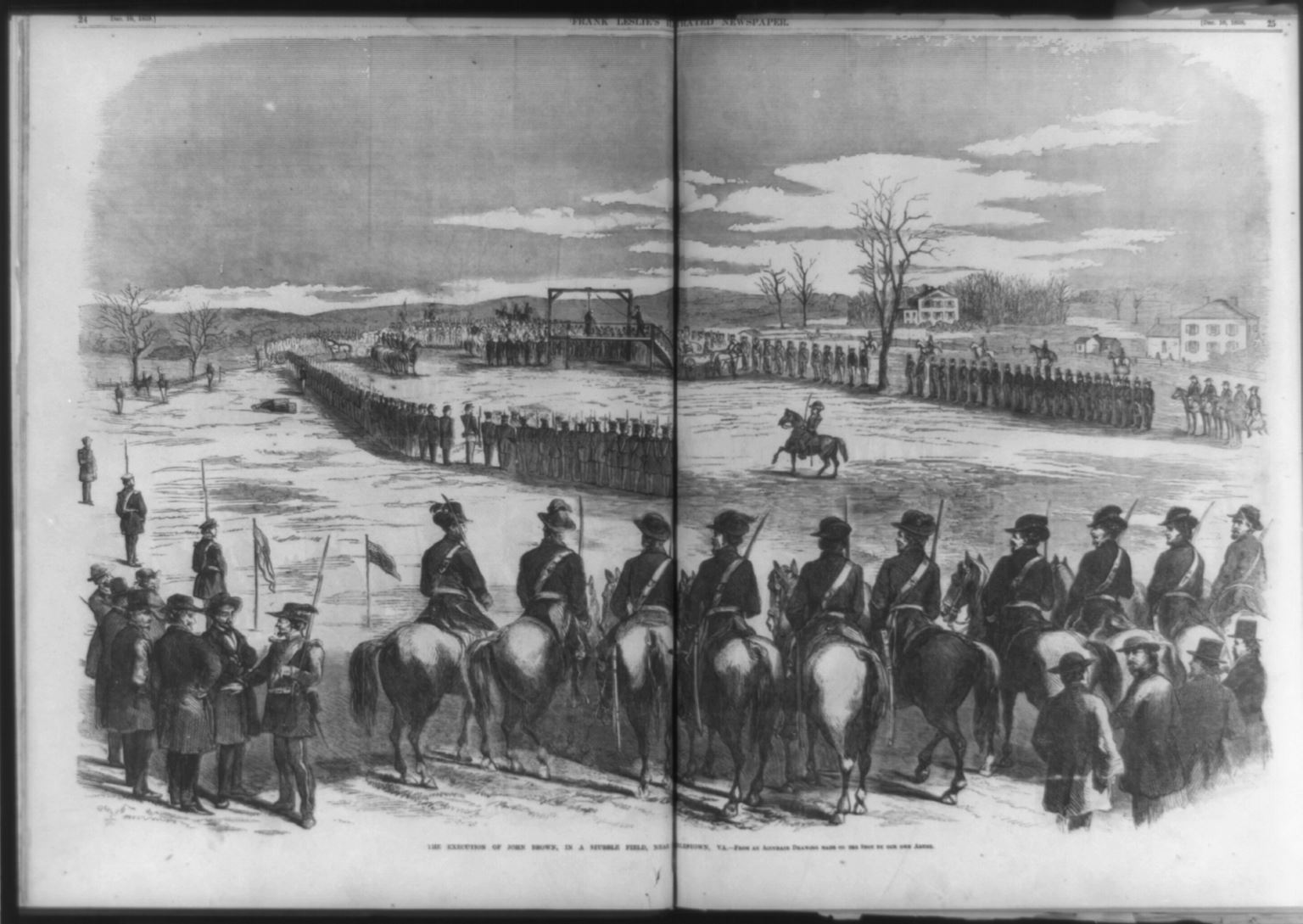 Fearful of a rescue attempt or future slave revolt, the authorities took no chances during Brown’s execution. They ordered civilians to stay indoors and called up every militia and military company in the area into service. Source: Library of Congress

On December 2, 1859, Brown walked out of his jail cell and stepped onto a cart. Sitting on his own coffin, he rode to the execution site. He took his last breath surrounded by a cast of characters that would play important roles in the next few years. Robert E. Lee remained nearby in Harpers Ferry. Thomas Jonathan “Stonewall” Jackson stood guard with Virginia Military Institute cadets. And, among the militia guarding the proceedings, a young John Wilkes Booth looked on. After the trapdoor fell, a voice cried out, “So perish all such enemies of Virginia. All such enemies of the Union. All such foes of the human race.” The other captured raiders met the same fate soon after. Students at the Winchester Medical College absconded with the bodies of John Copeland and Shields Green for use in their classes.

John Brown was dead, but the fight over his raid and his cause continued. Brown had made “the gallows as glorious as the cross,” Ralph Waldo Emerson declared. Frederick Douglass noted, “The future will write his epitaph upon the hearts of a people freed from slavery.” However, many white southerners and their Northern allies continued their efforts to cast Brown as a crazed villain, and Northern abolitionists, in general, as his willing accomplices. Edmund Ruffin, a pro-secessionist activist, considered the raid as evidence of “the fanatical hatred borne by the dominant northern party” towards the South. Jefferson Davis, future president of the Confederacy, declared that Brown came to Virginia to “incite slaves to murder helpless women and children.” 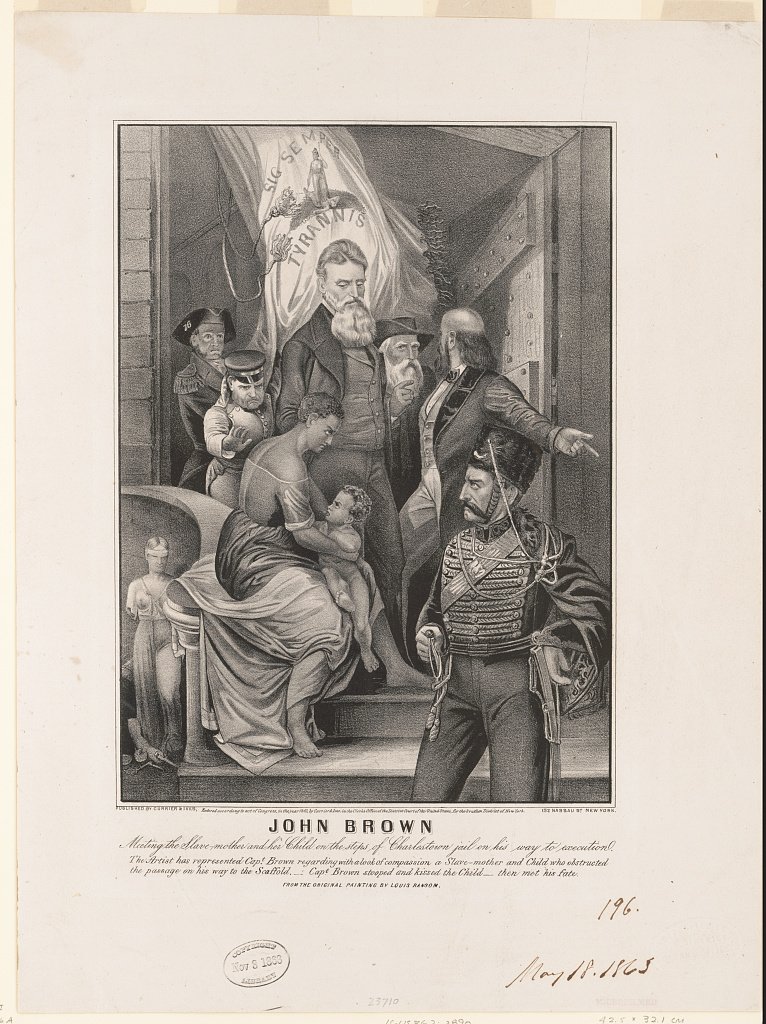 While the image of John Brown kissing the head of an enslaved child on the way to his execution is iconic, it is also a myth. No civilians were allowed near the jail or execution site. Source: Library of Congress

Others tried to strike a middle ground. Abraham Lincoln, on the cusp of his presidential run, declared, “We cannot object [to Brown’s execution], even though he agreed with us in thinking slavery wrong. That cannot excuse violence, bloodshed, and treason.” Despite Lincoln’s efforts, many Southerners considered Lincoln’s Republican Party to be in league with Brown, and Lincoln’s words did nothing to dissuade them, nor did they heal the country’s deepening sectional divisions. Brown and his raiders’ actions further enflamed the already tense relationship between North and South. The fight over the raid’s meaning deepened this rift. As the Richmond Enquirer noted, “The Harper’s Ferry invasion has advanced the cause of Disunion more than any other event since the formation of the Government.”

When Lincoln won the 1860 election, it was the final straw for many slavery supporters. “Now that the black radical Republicans have the power I suppose they will Brown us all,” Mary Chestnut, a diarist and senator’s wife, reported secessionist declaring. South Carolina quickly seceded, and ten other states eventually followed suit. Several state declarations of secession directly referenced the raid on Harpers Ferry. Mississippi’s declaration, after stating that “our position is thoroughly identified with the institution of slavery,” noted that anti-slavery forces “had invaded a State, and invested with the honors of martyrdom the wretch whose purpose was to apply flames to our dwellings and the weapons of destruction to our lives.” Georgia declared that abolitionist efforts had “led to the actual invasion of one of the slave-holding States and those of the murderers and incendiaries who escaped public justice by flight have found fraternal protection among our Northern confederates.”

Right before his execution, John Brown wrote a note to his jailer. “I John Brown am now quite certain that the crimes of this guilty land will never be purged away; but with Blood.” Less than two years after his death, the country was at war. As Union and Confederate forces clashed, and cemeteries began to fill with the dead, a new marching tune was heard among the soldiers marching south soldiers marching. “John Brown’s body lies a-mouldering in the grave / but his soul goes marching on…”

Confrontation with the Past: The Legacy of American Indian Boarding Schools in the United States
Creating a Corporate Anniversary Exhibit for HAI
Saving Super Mario Maker
Chronicling Health and History: HAI’s Decades-Long Collaboration with the NIH