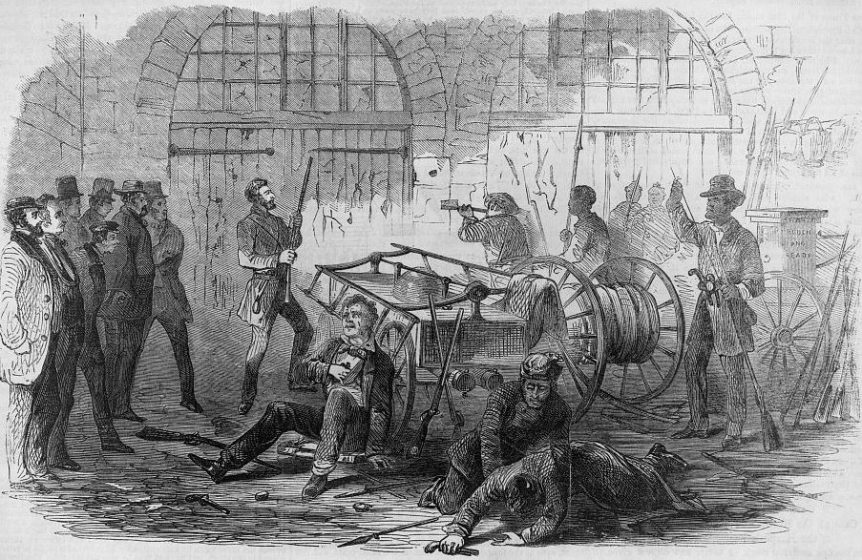 This is the first of a three-part blog series in honor of the 161st anniversary of John Brown’s raid. Check back in next week for the second and third installments of this remarkable and fateful story.

An extremely devout man, John Brown saw slavery as a war against the enslaved and believed it went against both the Bible and the Declaration of Independence. Source: Library of Congress

On the night of October 16, 1859, a group of 22 men made their way along a winding road in western Maryland. Past darkened farms, houses, and buildings, the group quietly pushed a wagon full of weapons. Led by abolitionist John Brown, their goal was to reach the federal armory and arsenal in Harpers Ferry, a town in present-day West Virginia (at the time, part of Virginia). After taking the town, the group would march into the mountains to commence a guerrilla war against slavery itself, with the hope of creating an army of the self-liberated that would compel the United States to end the institution once and for all.

A lifelong abolitionist, Brown had never fired a weapon at another person before he traveled to Kansas in the early 1850s. At the time, the territory was engulfed in a brutal conflict called, “Bleeding Kansas,” which pitted settlers who wanted Kansas to join the Union as a slaveholding state against “free soilers” who wanted it to enter as a free state. Brown traveled to Kansas at the urging of his sons to aid the free state cause. After a spate of violent attacks by pro-slavery attacks on free soilers, Brown, shocked, horrified, and worried about his family’s safety, decided to strike back. On the night of May 24, 1856, Brown and a group of accomplices raided the cabins of several of their pro-slavery neighbors and brutally murdered five men. The victims had no chance to defend themselves, and the violence shocked many free soil adherents. Brown then participated in the unsuccessful defense of the antislavery community in the town of Osawatomie, earning himself the nickname Osawatomie Brown. During the battle, pro-slavery forces killed his son, Frederick. 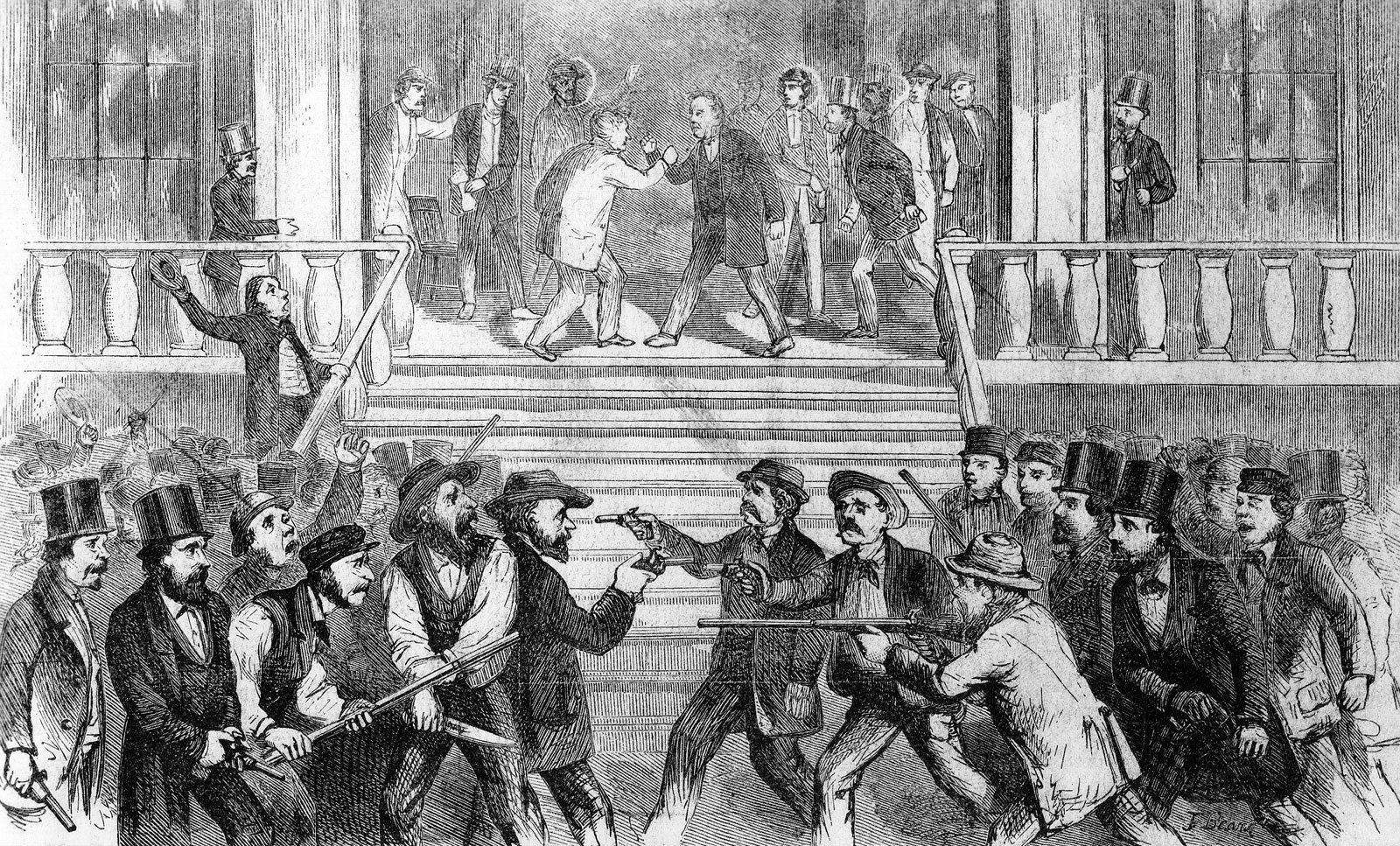 Pro-slavery and free soil forces clash in Kansas. His time in the territory helped convince Brown to open a new front in the war against slavery. Source: Library of Congress

After masterminding the escape of several enslaved people from Missouri to Canada, Brown began planning his next move. Now a wanted fugitive, he had come to believe that for slavery to end, he would need to take the fight to the enslavers. Brown began recruiting allies. In addition to three of his sons, other volunteers included John E. Crook, a veteran of Bloody Kansas; Dangerfield Newby, a formerly enslaved man whose wife and children remained in captivity; Osborne Perry Anderson, a free Black man living in Canada; and Francis Jackson Meriam, the grandson of a prominent abolitionist who joined Brown despite being blind in one eye. In 1858, Brown, several of his followers, and 34 Black abolitionists gathered in Chatham, Canada. There they drew up a provisional constitution for a new government and named Brown commander in chief. The plan of government was meant to exist alongside the US Constitution up until the United States abolished slavery. After the Chatham Convention, Brown began planning his war against slavery in earnest and soon determined that the federal armory at Harpers Ferry would be his first target. Brown planned to steal weapons there before traveling south through the Appalachian Mountains to raid plantations and arm enslaved people. A group of six financiers, known as the Secret Six, provided a majority of the funding for the raid.

Not everyone in the anti-slavery camp supported Brown’s plan. During a nighttime meeting outside of Chambersburg, Pennsylvania, abolitionist Frederick Douglass bluntly told Brown that he was walking into “a steel trap.” Despite Douglass’s misgivings, Shields Green, a self-liberated freedman who had accompanied Douglass to the meeting, decided to join the raid. Brown and his raiders made their headquarters at the Kennedy Farm in Western Maryland, five miles from Harpers Ferry. His daughter Anne and daughter-in-law Martha served as lookouts and helped deflect suspicion as more and more men traveled to the farm and Brown gathered intelligence about the area.

(From l to r) Dangerfield Newby, Osborne Anderson, Lewis Leary, Shields Green, and John Copeland all volunteered to join the raid. Of these men, only Anderson would avoid death or capture. Source: West Virginia State Archives, Boyd B. Stutler Collection

On October 16, Brown set his plan in motion, telling his men, “get on your arms, we shall proceed to the ferry.” The 22 person party set out for their destination. A few of the men remained in Maryland, while Brown and 18 raiders continued on to Harpers Ferry. After quickly seizing the armory, the group spread out, some charged with capturing strategic buildings and others with taking hostages. When a train pulled into the local station, Brown’s men held it up. Investigating the commotion, Heyward Shephard, a free Black man, approached the group. Ordered to halt, he attempted to flee and was mortally wounded. Later that night, Brown captured a number of hostages, including Lewis Washington, the great-grandnephew of George Washington. 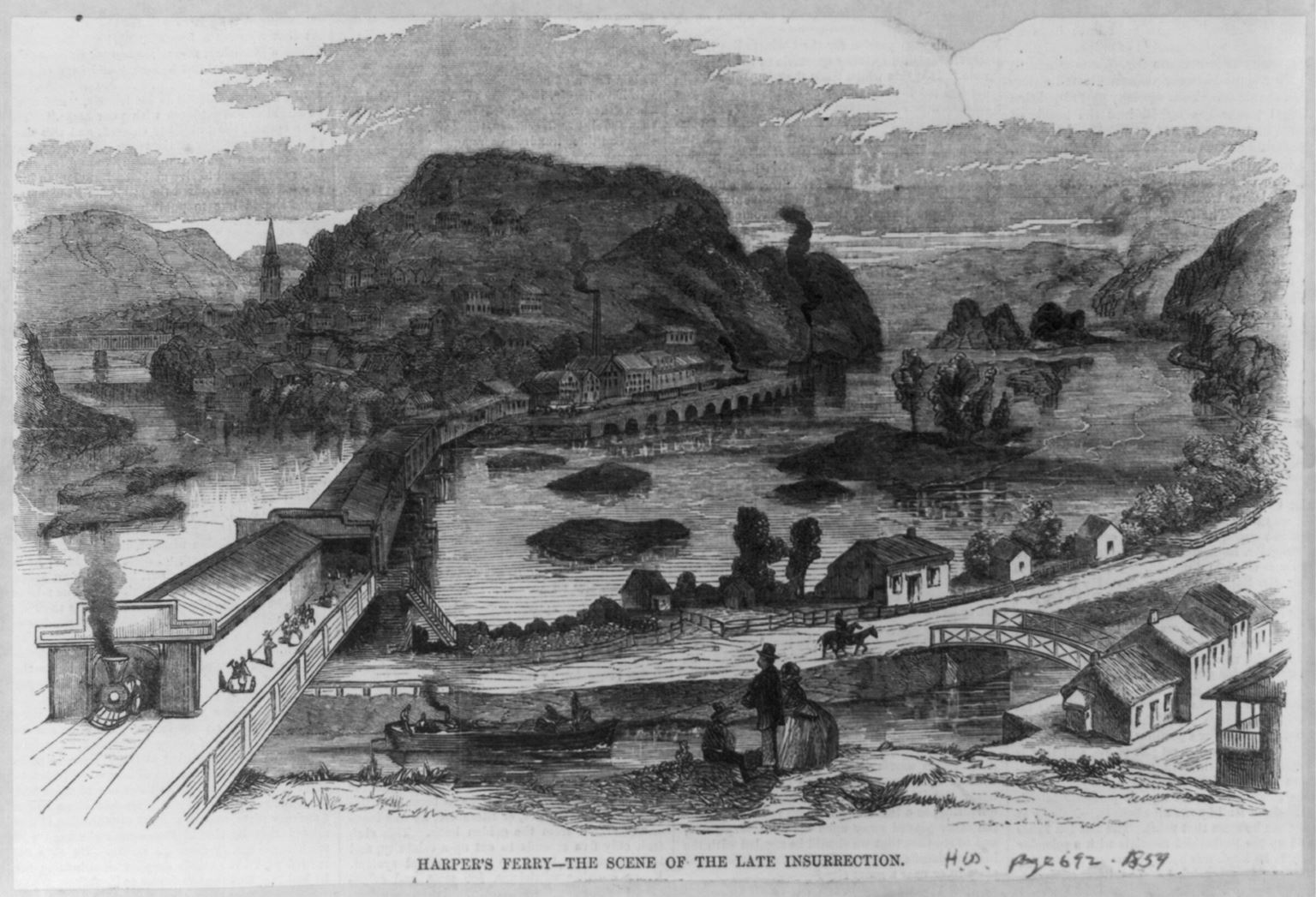 A view of Harpers Ferry from Maryland. Brown and his fellow raiders crossed the railroad bridge on the left side of the image. Source: Library of Congress

Despite the gunshots, news of the raid spread slowly. Many Harpers Ferry residents attributed the noise to bandits or workers going on strike. After Brown allowed a train stopped at the station to proceed, the conductor wired the president of the B&O railroad who then wired President James Buchanan and the governor of Virginia. Even then, the authorities remained unsure of Brown’s true purpose.

At this point, Brown had accomplished his first objectives. He’d captured the armory, secured several high-profile hostages, gathered weapons, and recruited a few enslaved people to join the fight. Had he left Harpers Ferry then, the course of the raid might have taken a very different turn. However—for reasons that remain hotly debated by historians—he decided to wait. Some historians believe that he was waiting for more recruits to join him; others say that he wanted witnesses to clearly see that the raid was part of a slave revolt and not a random robbery. But this remains conjecture. Whatever the reason, as the sun rose, John Brown and his men were spread throughout Harpers Ferry, about to realize that while the town was an ideal target for a raid, it was a terrible place for a siege. 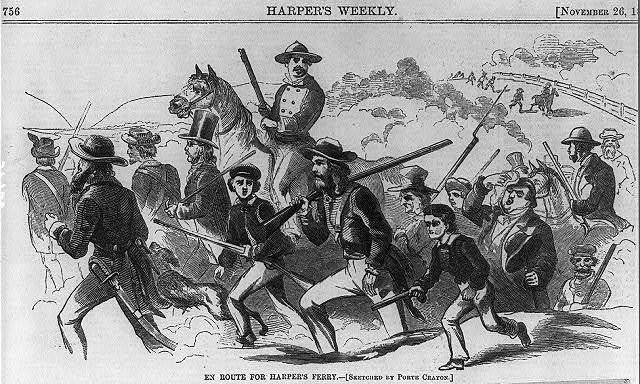 As word spread about the raid, militia units began to converge on Harpers Ferry. Brown and his men soon found themselves overwhelmed. Dangerfield Newby, who had joined Brown to free his enslaved wife and children, was shot and killed as he attempted to fall back. Angry militiamen cut off his ears as trinkets and left his body for the hogs. Brown, his remaining men, and his hostages took refuge in the old armory engine house, afterward known as John Brown’s Fort. There, they cut holes through the brick walls and fired back at the militia, killing several civilians, including Harpers Ferry’s mayor, Fontaine Beckham.

During the night of October 17, a group of US Marines arrived in Harpers Ferry. Led by Lieutenant Colonel Robert E. Lee, the highest-ranking officer fit for duty in the Washington, D.C. area, President Buchanan sent them to retake the armory. The next morning, Lee sent his aid, James Ewell Brown “Jeb” Stuart to offer Brown a chance to surrender. Brown offered a counterproposal: the Marines would allow him and his raiders safe passage across the river, at which point Brown and his men would release the hostages. Stuart refused and waved his hat, the signal to attack. 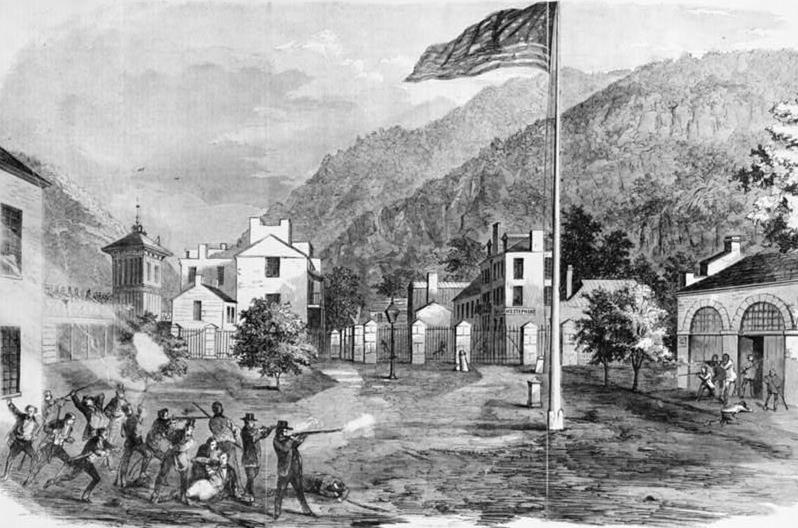 This print depicts raiders and local militia exchanging shots at the armory complex. The armory engine house (now known as John Brown’s Fort) is on the right. Source: Library of Congress 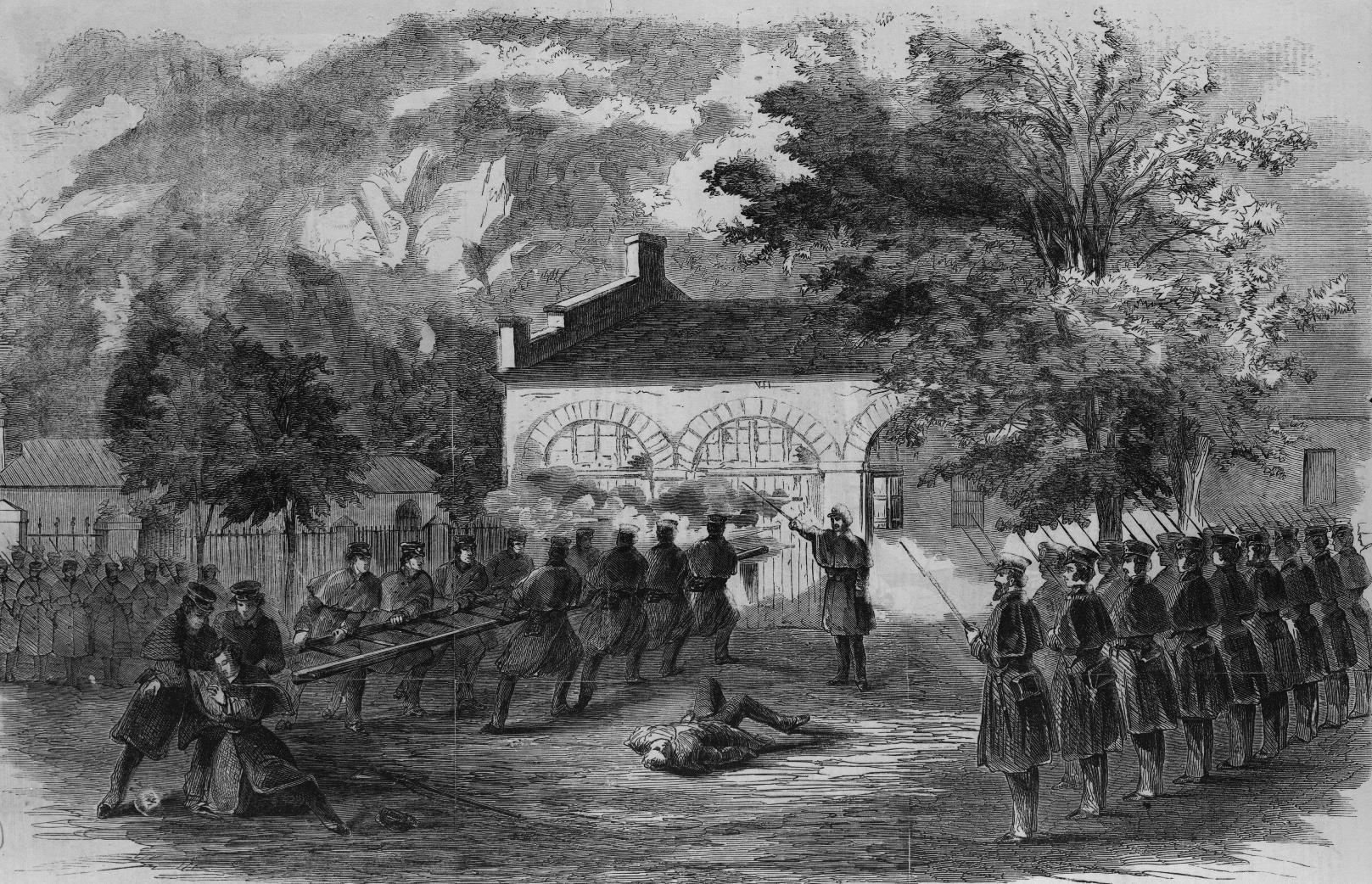 Marines storm the armory engine house using a ladder as a battering ram. Today, the Marines consider Harpers Ferry to be a Marine Corps battlefield and participate in National Park Service commemorations each year. Source: Library of Congress

The Marines rushed forward as Brown slammed the door. Using hammers, and then a ladder, they broke through into the engine house. In the chaos, Marine Corps Private Luke Quinn and several of the raiders were killed, and Brown himself was seriously wounded.

An observer in 1859 probably would’ve concluded the raid had failed. The slave revolt had not occurred, and all Brown could show for his actions was the blood and bodies lying in the streets of Harpers Ferry. Brown and his surviving raiders were carted off to Charles Town to await trial. Despite this, the white residents of Harpers Ferry remained on edge, convinced that the uprising of enslaved people that Brown had promised might still materialize. Little did they know that Brown’s raid would soon appear to be merely a prelude to a much larger conflict that would engulf the country and turn their town into a contested warzone.