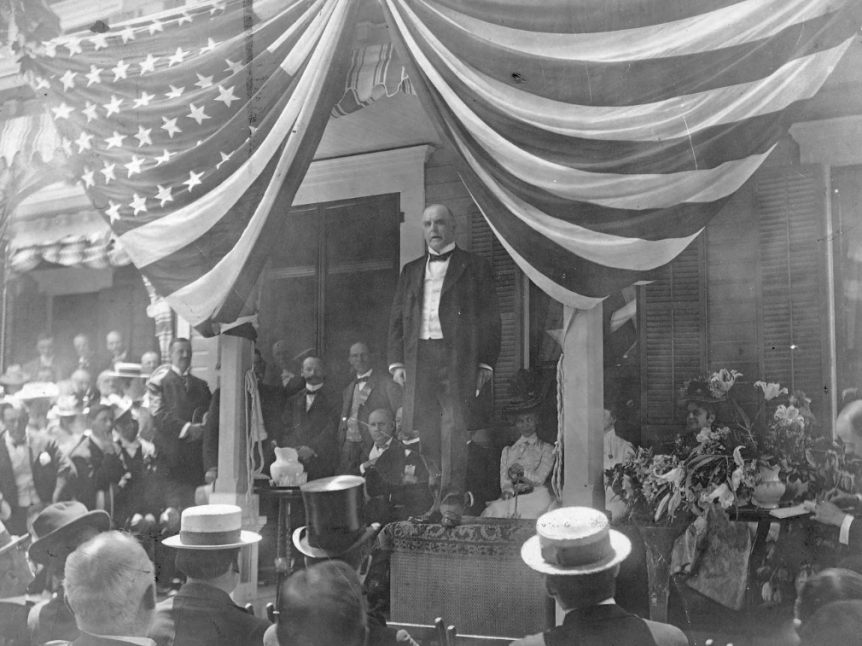 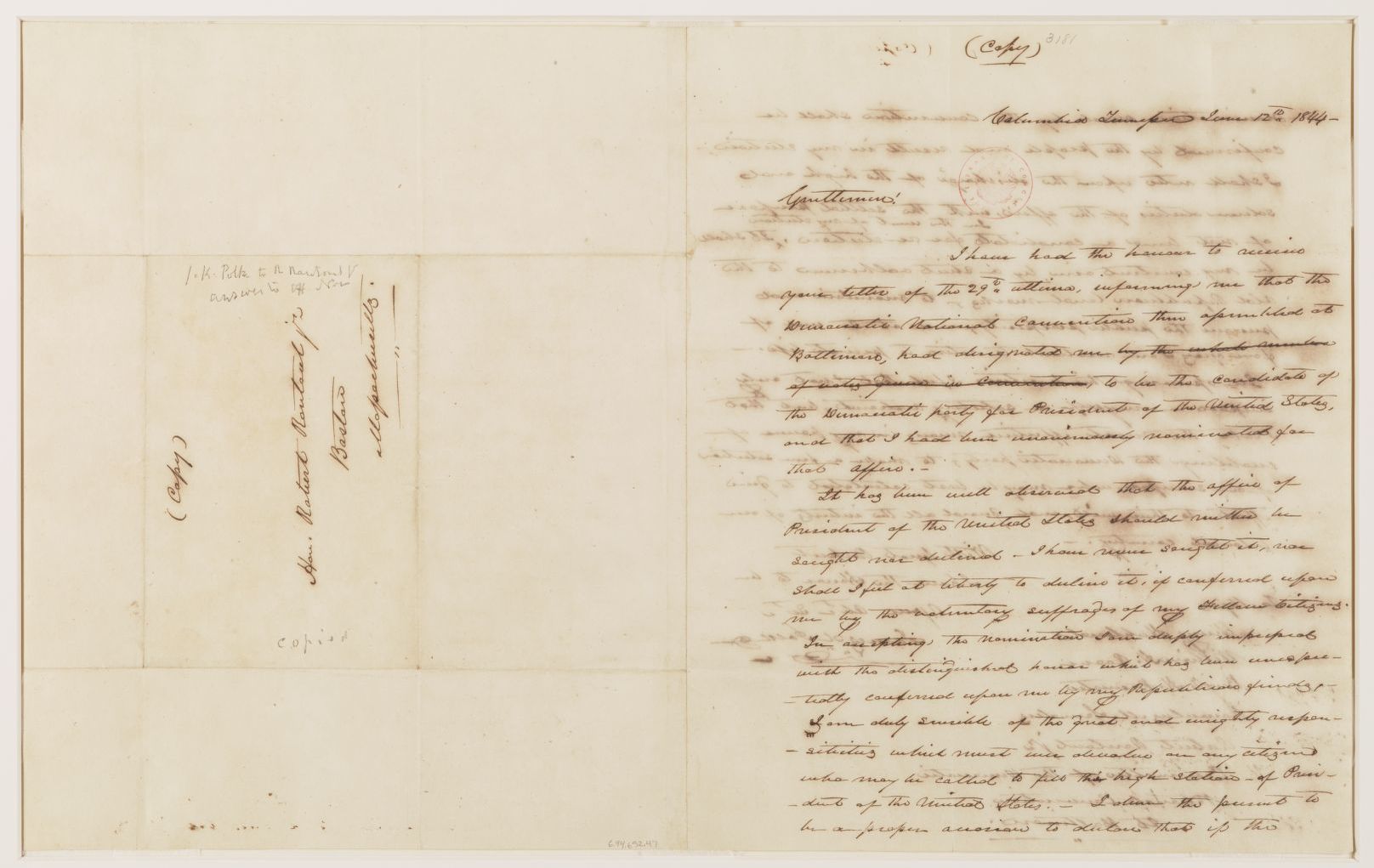 Since the founding of the nation, this United States has had a president in office. This fact has not changed over the years, but the campaign leading up to the election has. In the country’s formative years, it was practically unheard of for a presidential candidate to actively campaign for office. The letter below, written by James K. Polk to the Democratic National Convention in 1844, exemplifies this. In it, Polk, who went on to win the 1844 presidential election, famously states: “It has been well observed that the office of President of the United States should neither be sought nor declined.” Instead, surrogates would often campaign on behalf of the candidates, with the candidates primarily working to win support behind the scenes. Some Americans agreed with Polk and felt that it was improper for a candidate to actively campaign, while others wanted to hear more from those seeking the highest office in the land. 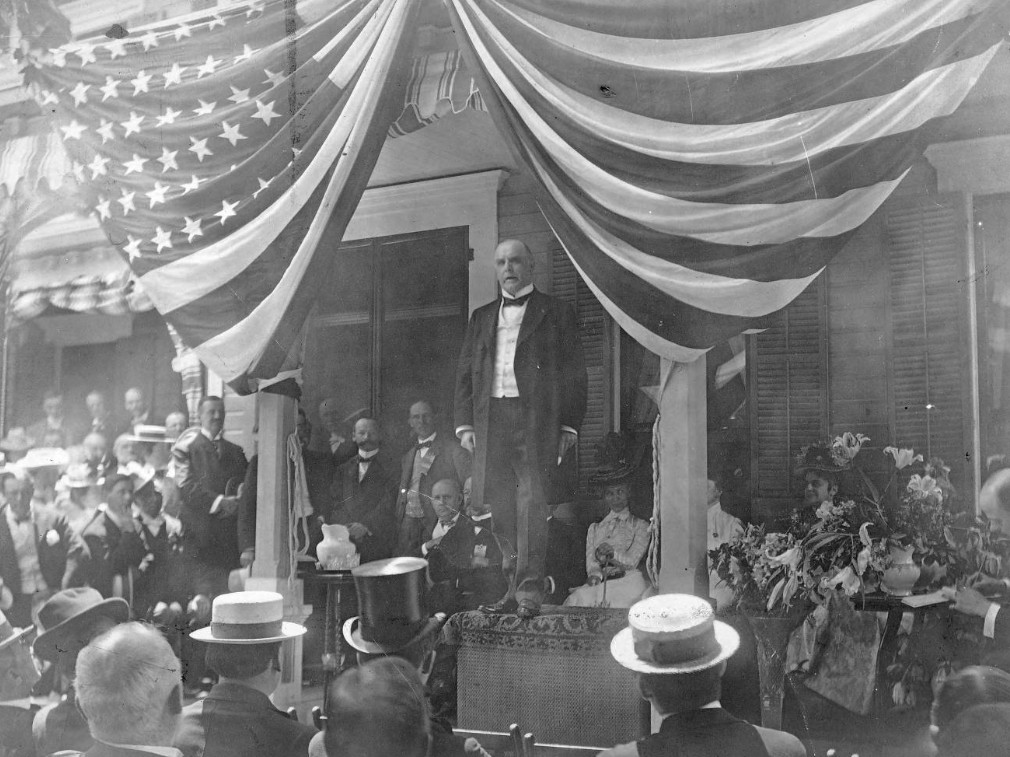 Presidential campaigns, however, soon started to shift. Instead of remaining silent, candidates began to give speeches, often referred to as “stump speeches.” William McKinley gave a variant on this during the 1896 campaign when he delivered a speech on his front porch. This became the centerpiece of his so-called “front-porch campaign,” and he continued to deliver speeches from his home. His opponent, William Jennings Bryan, chose instead to conduct a “whistle-stop campaign,” traveling the country by railroad and giving speeches at various train stops. While Bryan lost the election, future candidates would also conduct “whistle-stop” campaigns with greater success—in 1932, for instance, Franklin D. Roosevelt embarked on a countrywide tour, visiting 41 states and making hundreds of addresses and train stations appearances along the way. The campaign generated considerable enthusiasm and helped sweep FDR to victory. 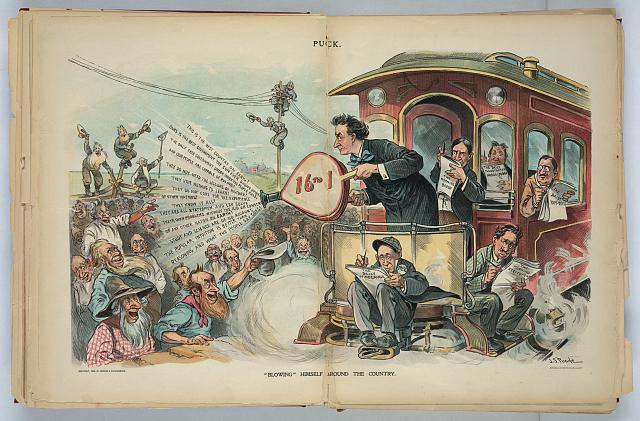 ‘“Blowing” himself around the country,’ a political cartoon by John S, Pughe, depicts presidential candidate William Jennings Bryan during his whistle-stop campaign. Source: Library of Congress

Campaigns continued to evolve throughout the 20th century. The invention of the television paved the way for presidential debates, much like the ones we see prior to modern-day elections. Televised presidential debates are a staple of today’s campaigns, but this was not the case until recently. In 1960, the first televised Presidential debate between candidates Richard Nixon and John F. Kennedy took place. Primary debates—as candidates jockeyed for their party’s nomination—had taken place prior to this one, but this marked the first time that candidates from different parties debated on television. The debate helped to tip the election in JFK’s favor, as his youth and charisma impressed and swayed voters. 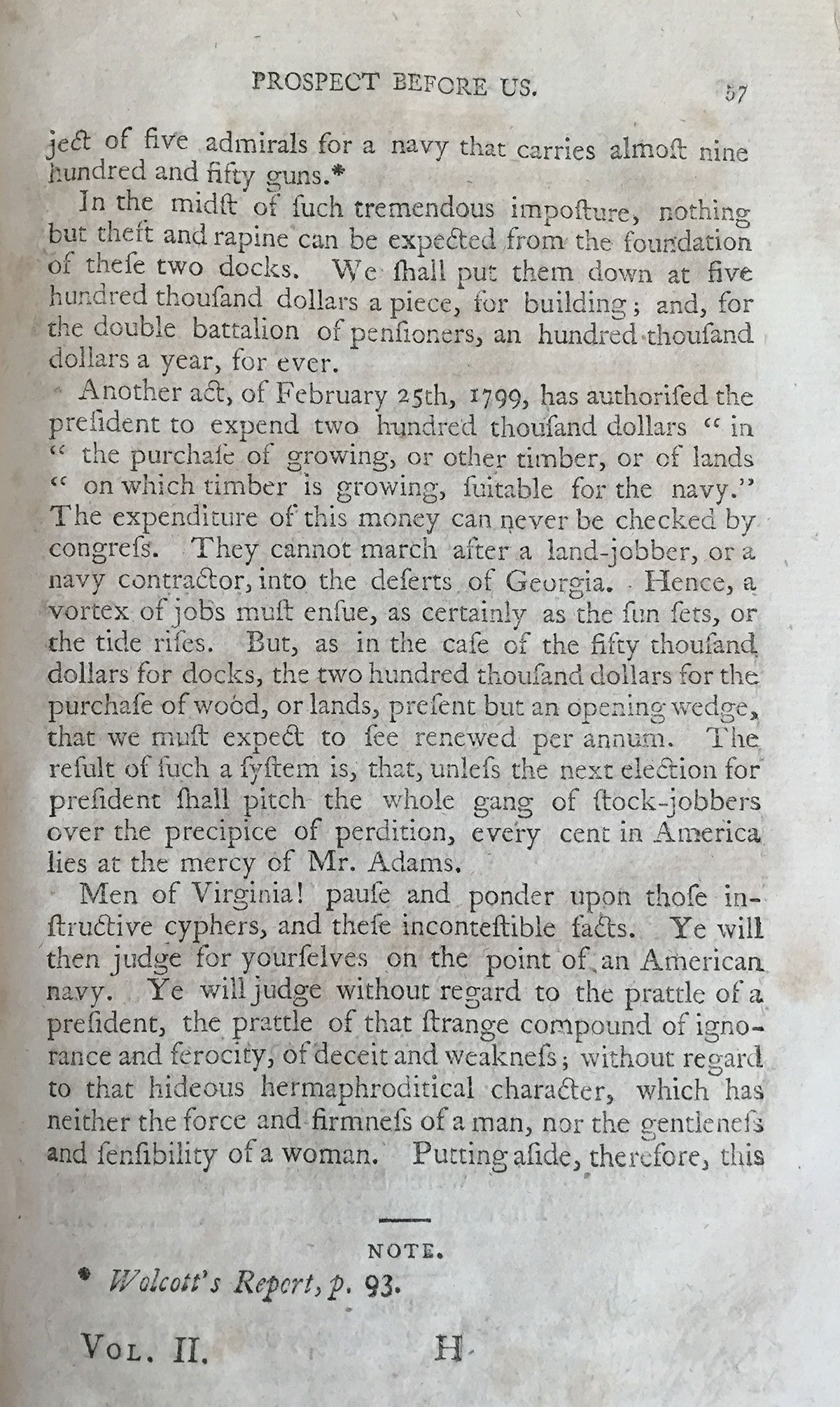 Technological advancements—from the radio to the television to the internet—have also transformed the ways candidates reach and advertise their platforms to voters. Today, most candidates now have websites and social media accounts dedicated to their campaigns. This trend took off in 2008 when Barack Obama used more than a dozen social media platforms to connect with the public, most notably Twitter. With these newer technologies, however, candidates still continue to use similar tactics as their predecessors—traveling the country to meet and address voters, for instance.

Other campaign tactics that have stood the test of time include catchy jingles, political cartoons, and smear campaigns, even if the candidates themselves did not take part in them. One of the first iterations of a smear campaign emerged during the third US Presidential campaign when supporters of both nominees published pamphlets bashing John Adams and Thomas Jefferson. Candidates and their supporters also used jingles to criticize their opponents—predecessors to today’s attack ads. During the 1884 presidential campaign, for instance, a jingle circulated claiming that candidate Grover Cleveland had fathered an illegitimate child. Political cartoons—generated by campaigns, newspapers, and satirists alike—have been used throughout the years; some favor one candidate over another while others simply praise or criticize one candidate in particular. Advertisements of all kinds have also been prevalent throughout campaign history, ranging from basic newspaper advertisements to highly-produced television spots.

Over the years, presidential campaigns have both evolved and adhered to longstanding traditions. Mediums may have changed, but some of the basics of campaigning have not—and we will most likely continue to see the same historic strategies for years to come. 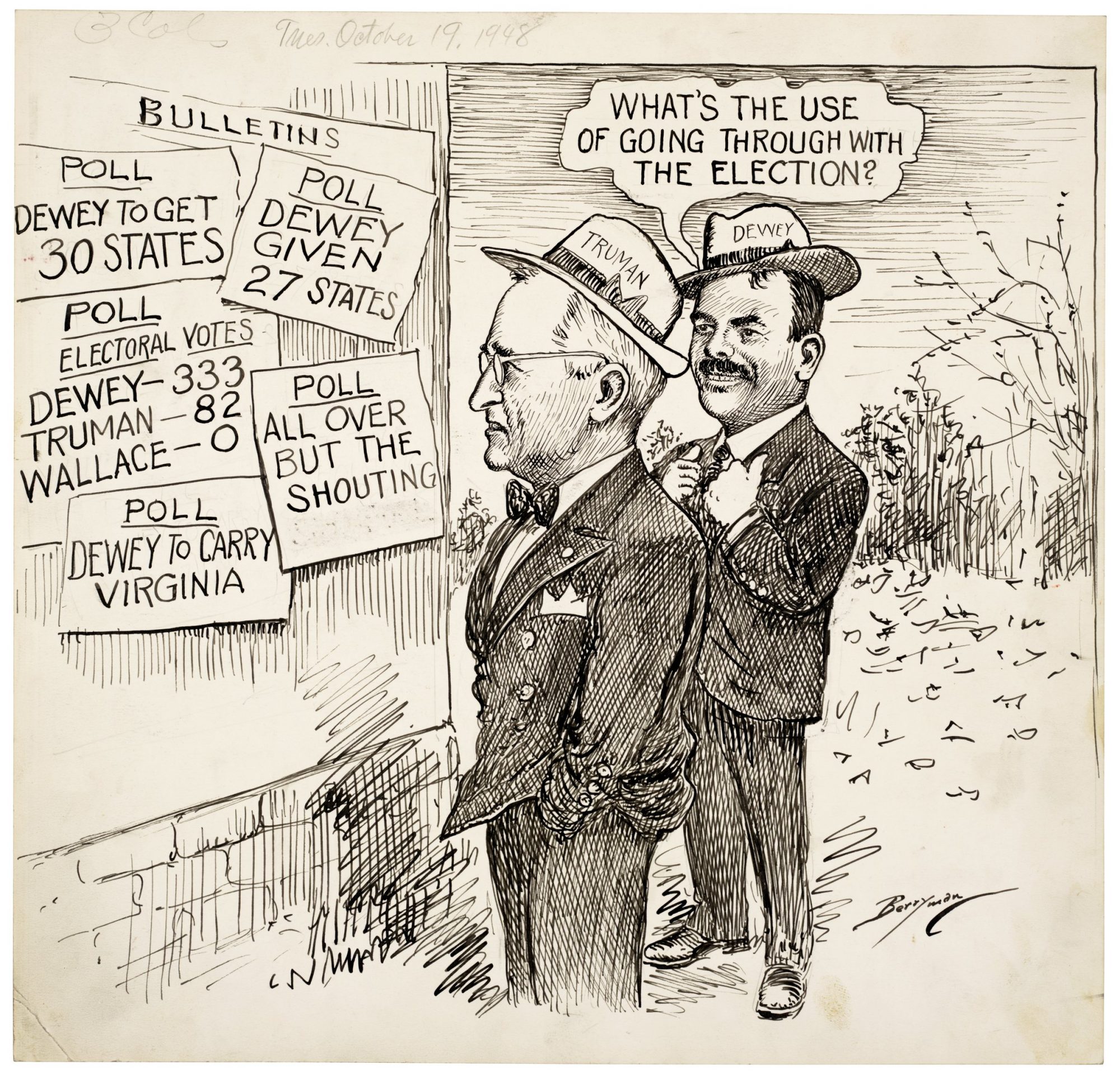 A political cartoon by Clifford Berryman depicting Harry S. Truman and Thomas E. Dewey during the election of 1948. The cartoon relays overwhelming support for Dewey in the polls and the belief that Dewey would win the election. Truman ended up winning the election, making it one of the biggest political upsets in American history. Source: The National Archives

Interested in exploring artifacts from campaigns past? Cartoonists Herbert Block and Clifford Berryman drew multitudes of political cartoons directed at presidents and presidential candidates throughout the 20th century. Some of their work can be found on the websites of the Library of Congress and National Archives. Visit this PBS webpage to view the Memorandum of Understanding for the 2004 presidential debate.