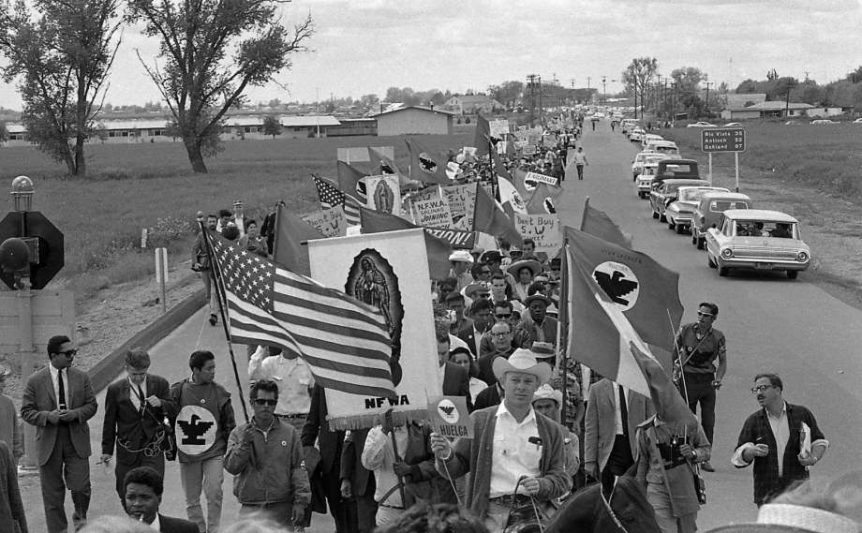 Happy Labor Day! While the holiday has become an opportunity to enjoy a long weekend, revel in the final days of summer, and prepare for the start of the school year (whatever that looks like this year), it’s worth taking a moment to reflect on the history and meaning of the holiday—especially in the midst of a year that has been especially tumultuous for the American worker.

Labor Day celebrates the social and economic contributions of workers and the achievements of the labor movement. It has historically served as an opportunity for protest and to organize for workers’ rights, including higher pay, better working conditions, and shorter working hours.

While it’s not entirely clear who came up with the idea for the holiday—Peter J. McGuire, a carpenter, and Matthew Maguire, a machinist, both claimed to have first proposed it—the first Labor Day celebration took place in New York City on September 5, 1882. Organized by New York’s Central Labor Union, an umbrella organization that represented workers from a variety of local unions, the celebration began with a parade through the streets of New York, attracting between 10,000 and 20,000 participants. According to a newspaper report, the parade featured “…men on horseback, men wearing regalia, men with society aprons, and men with flags, musical instruments, badges, and all the other paraphernalia of a procession” (women, who played an active role in the labor movement, also took part). At a post-parade picnic in a park on the Upper West Side, marchers listened to speeches, smoked cigars, and apparently consumed quite a lot of beer. An observer noted the presence of “lager beer kegs… mounted in every conceivable place.” 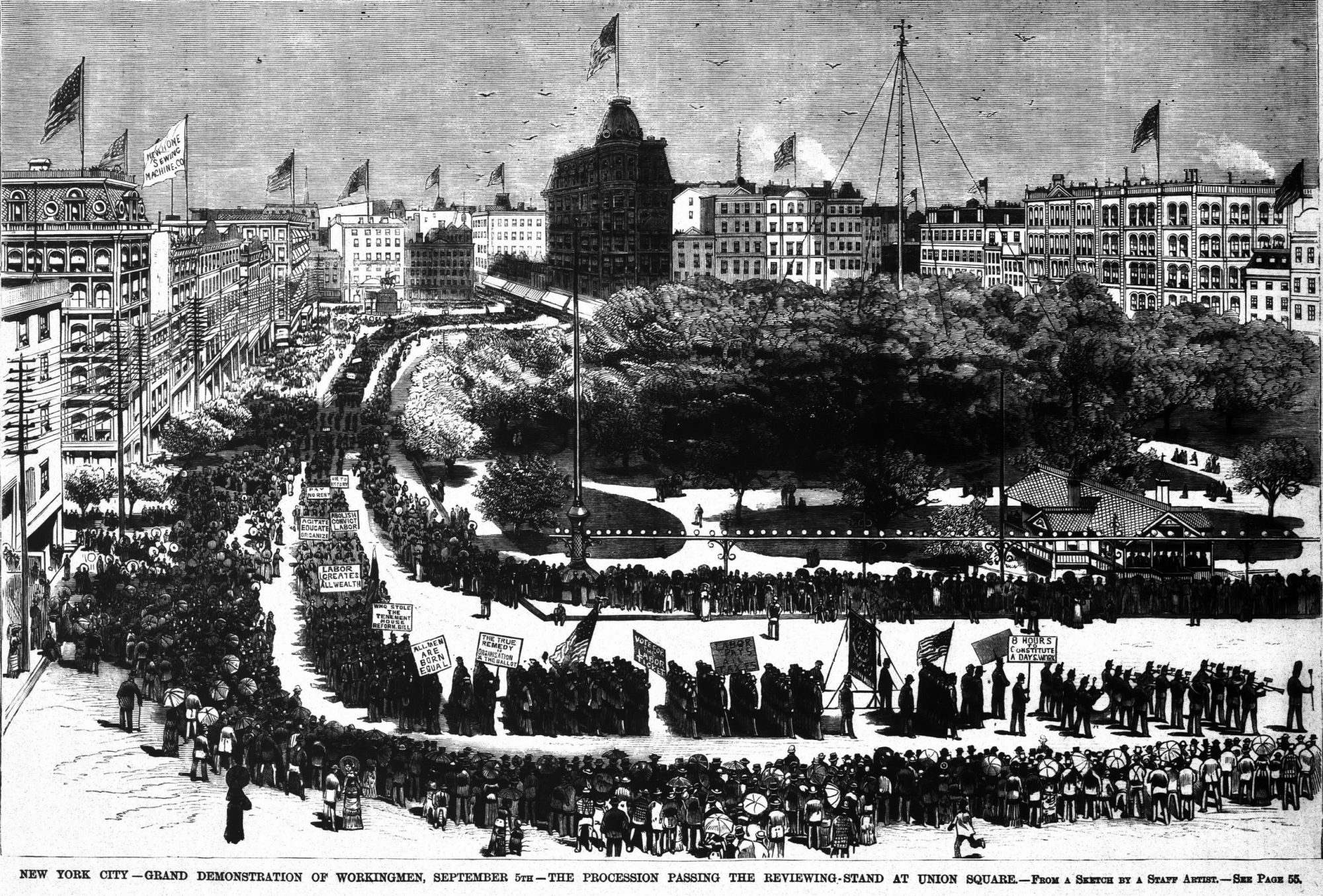 In this depiction of the 1882 Labor Day celebration in New York City, marchers carry signs with messages like “all men are born equal” and “labor creates all wealth.” Source: Library of Congress

States soon began to pass laws making Labor Day an official holiday. Oregon became the first to do so, followed by Colorado, Massachusetts, New Jersey, and New York. More states continued to follow suit, and on June 28, 1894, Congress passed a law declaring the “first Monday of September in each year, being the day celebrated and known as Labor’s Holiday, is hereby made a legal public holiday.”

In honor of the men and women who have fought for worker’s rights for centuries and the original spirit of Labor Day, here are just a few historical milestones in the history of the American labor movement that you can bring with you to your socially distanced barbeques. 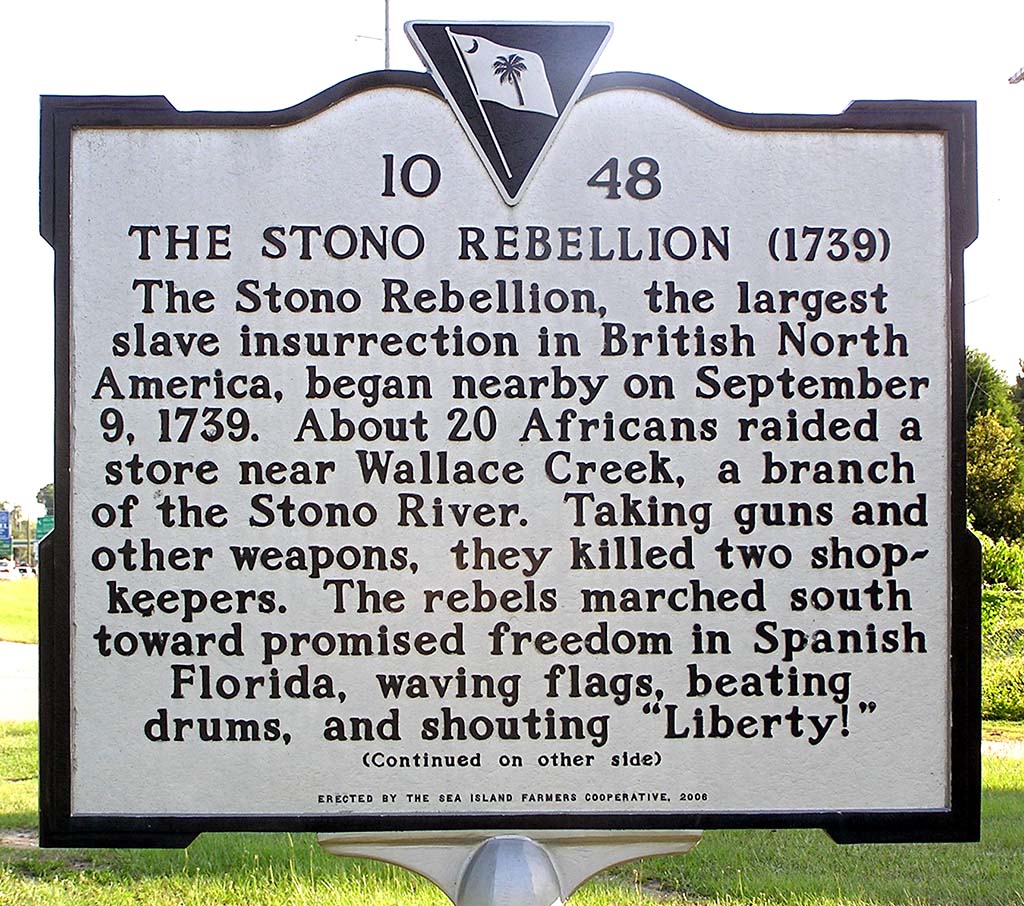 This historical marker commemorates the Stono Rebellion. While not traditionally considered part of the American labor movement, enslaved people deserve recognition for their resistance to forced labor. Source: BlackPast

Enslaved men, women, and children, formed a crucial part of the early American labor force. For nearly 250 years, a brutal system of chattel slavery built the nation’s economy and wealth. Systematically denied basic human rights, enslaved people still managed to resist their oppressors. Their tactics ranged from work slowdowns and acts of sabotage to escapes and armed revolt. Violence was often the only option in the face of complete oppression. In September 1739, an enslaved Angolan named Jemmy led what would become the largest uprising against slavery in British colonial America. On the banks of the Stono River in South Carolina, the band of armed Black Carolinians carried banners demanding “Liberty,” gathered more recruits, and attacked white opponents. In the end, about 20 white colonists and twice as many rebels were killed. In response, enslavers imposed harsher rules and restrictions designed to prevent further uprisings. 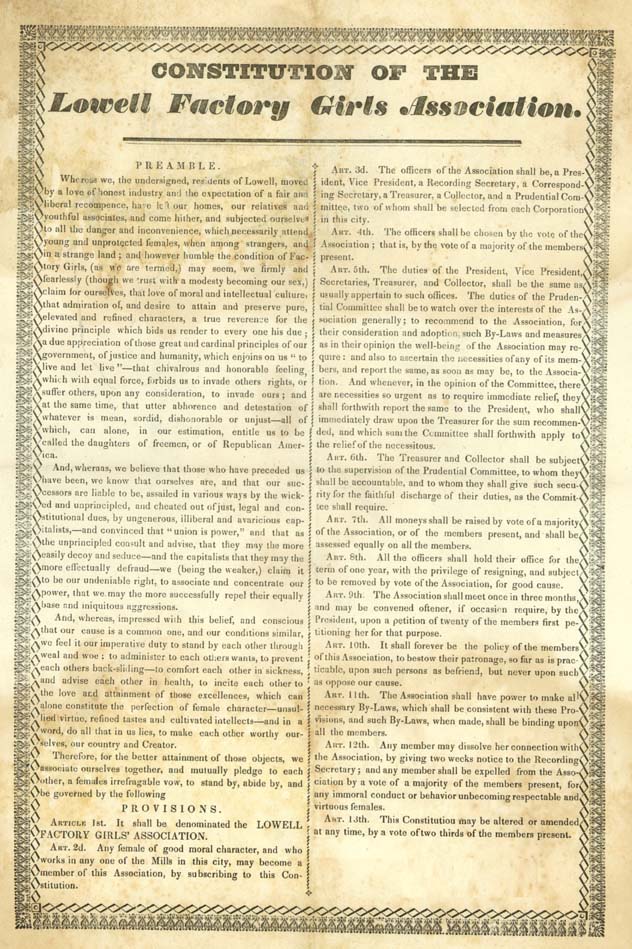 The 1836 constitution of the Lowell Factory Girls Association. The mill girls organized to demand higher pay and better treatment decades before the mass movement for workers’ rights began in earnest in the 1880s. Source: Wikimedia

In the 19th century, lower class, often immigrant women made up an important part of the American workforce, especially in the country’s booming textile industry. In Lowell, Massachusetts, women—including girls as young as 12—worked long days in the stuffy, unventilated textile mills, operating dangerous machines that could maim or disfigure in an instant. In the 1830s, the so-called “Lowell Mill girls” organized and went on strike when the factory owners cut wages in 1834 and again in 1836. While their efforts saw little change or success, they helped to raise awareness about the horrific conditions in the mills and paved the way for other workers to fight against injustice in the decades to come. In the words of Sarah Bagley, an outspoken organizer at Lowell, the mill girls were “not willing to see our sex made into living machines to do the bidding of the incorporated aristocrats and reduced to a sum for their bodily services hardly sufficient to keep soul and body together.”

By the 1880s, the labor movement was gaining momentum as more and more workers organized and went on strike against dangerous working conditions, long hours, and low pay. In 1884, the Federation of Organized Trade and Labor Unions—predecessor to the American Federation of Labor—called upon workers nationwide to start a campaign for an 8-hour workday on May 1, 1886. When workers gathered in Chicago’s Haymarket Square in support of the reform, peaceful protest turned violent when police officers attacked the crowd. In the midst of the chaos, someone—their identity still unknown—threw a bomb. Seven policemen and at least four protesters died, and dozens more were injured. The Haymarket Affair prompted a swift backlash against the burgeoning labor movement, but it also inspired labor activists and leaders for generations to come. 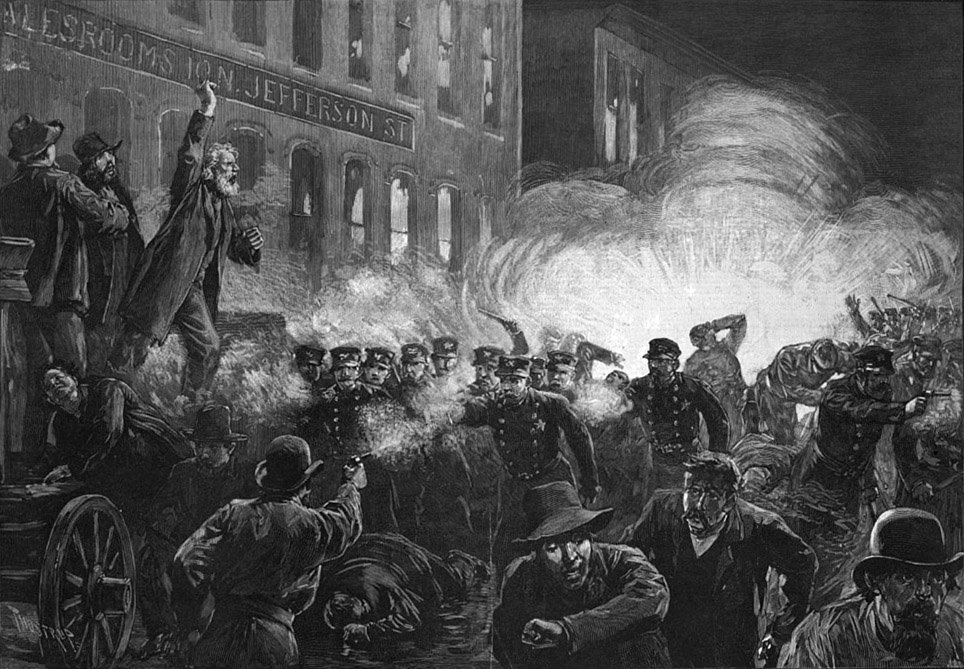 A dramatized illustration of the events at Haymarket Square. Because many of the workers involved in the Haymarket rally were of German descent, anti-immigrant sentiment surged in the aftermath. Source: Wikimedia 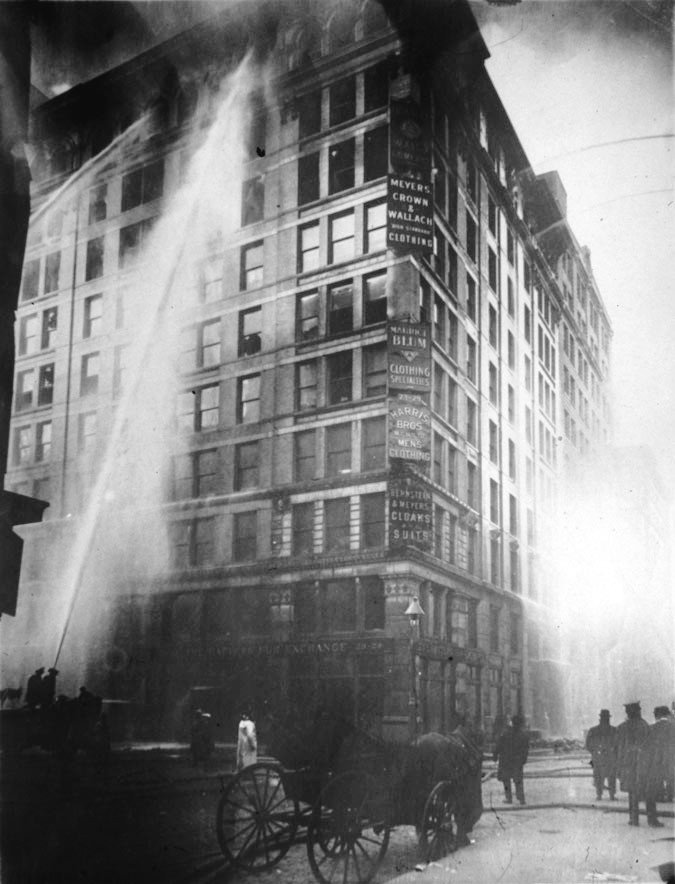 The blaze at the Triangle Shirtwaist Factory, which started in a rag bin, did tremendous damage in just 18 minutes. You can listen to three survivor oral histories on Cornell’s “Remembering the 1911 Triangle Factory Fire” website. Source: Wikimedia

On March 25, 1911, the Triangle Shirtwaist Factory in New York City caught fire. The sweatshop where primarily immigrant teenage girls worked 12-hour days was a death trap. The building had only one working elevator, a narrow fire escape, and two stairwells to the street—one that was locked from the outside, one that only opened inward. The owners of the factory refused to install sprinklers or take other safety measures and even had a history of burning their own properties to collect on hefty fire insurance policies (although this was not the cause of the Triangle Shirtwaist Factory fire). As a result of this corruption and negligence, 145 workers lost their lives that day in March, many of whom jumped from the building rather than burn to death. It took a tragedy to raise awareness and spur long-overdue reforms. The fire informed the work and views of Frances Perkins, who oversaw the passage of several labor laws—including the establishment of a federal minimum wage, a ban on child labor, and protections for unions—during the presidency of Franklin D. Roosevelt. 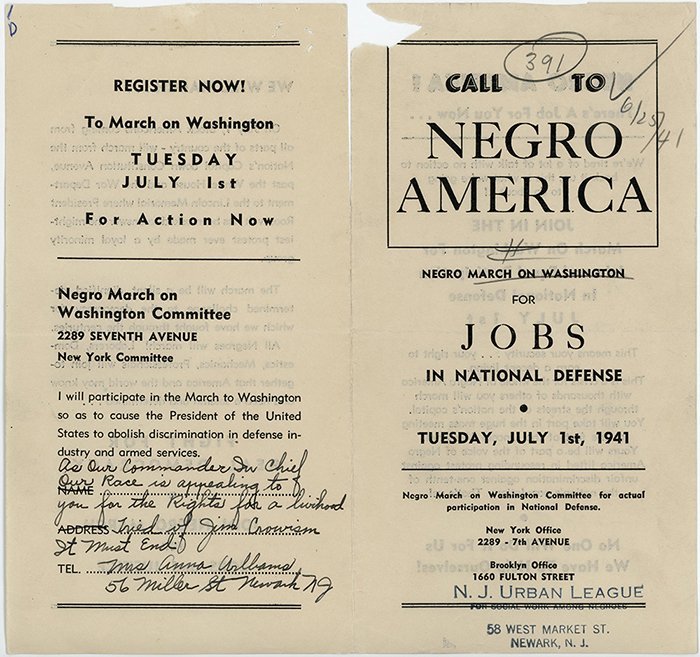 World War II transformed the American economy, helping to pull the country out of the Great Depression and creating scores of new war industry jobs. Rampant racism and discrimination, however, meant that Black Americans had limited access to defense jobs. In response, labor and civil rights leader A. Philip Randolph—who had led a successful organizing campaign that resulted in contracts for Black railroad porters—planned a massive march on Washington in protest. Just one day before the event, FDR met with Randolph and agreed to pass an executive order banning racial discrimination in defense industries. The 1941 march did not take place, but Randolph remained a leading figure in the Civil Rights Movement, helping to organize a large demonstration at the Lincoln Memorial in 1957, and the iconic March on Washington for Jobs and Freedom in 1963. 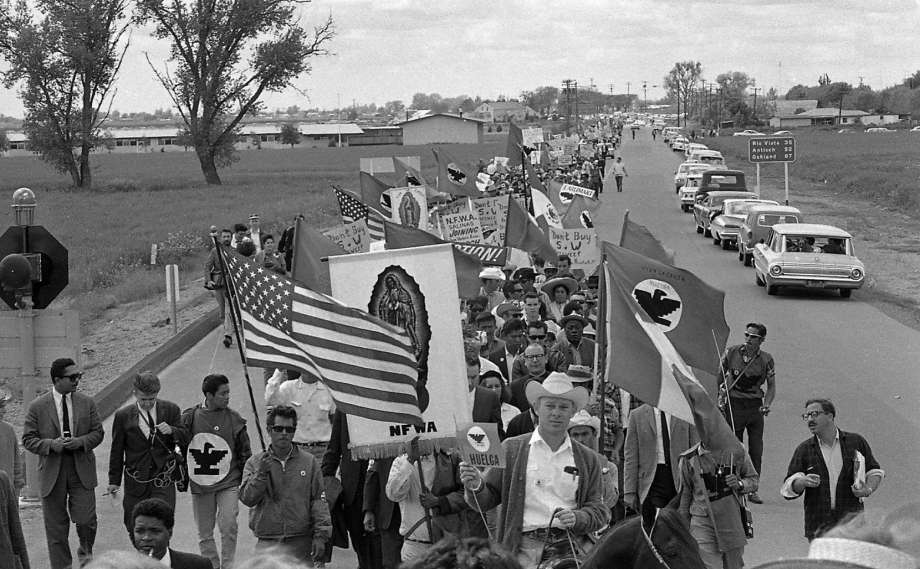 Protesters march from Delano to Sacramento. Some carry the flag of the United Farm Workers, which is emblazoned with an Aztec eagle. Source: San Francisco Chronicle

In the 1960s, labor and civil rights activists Cesar Chavez and Dolores Huerta formed the United Farm Workers of America to fight for the rights of Latinx and migrant farmworkers. Their efforts caught the attention of Filipino American grape pickers, who approached Chavez in 1965 for his support to organize a protest against low wages and poor conditions. In collaboration with Filipino American organizer Larry Itliong, Chavez helped the grape pickers launch a five-year-long strike, using the nonviolent tactics of the Civil Rights Movement. This included a hunger strike; a 300-mile march between Delano, California, and the state capital, Sacramento; and a boycott on grapes that soon spread across the country. After five years of protest, the grape pickers won a new union contract that guaranteed better pay, benefits, and other protections.

The 1980s brought a decades-long retreat from large work stoppages when President Ronald Reagan summarily fired over 10,000 Professional Air Traffic Controllers Association (PATCO) workers on strike. In so doing, he vitalized an era of union-busting and empowered employers to resist engaging in labor conflict negotiations.  But the large-scale strike found new life in 2018. On February 22 of that year, 35,000 teachers in West Virginia’s 55 counties went on strike for higher pay and better healthcare. West Virginia’s teachers had annual salaries well below the national average—about $13,000 less. On March 6, the legislature approved a 5 percent pay raise for all state workers, including teachers; the next day, teachers re-entered their classrooms.

The movement spread from West Virginia to other states, including Arizona, Colorado, Oklahoma, Kentucky, and North Carolina, until it included over 260,000 teachers and made 2018 the biggest year of large work stoppages in a generation. The 2018 teacher strikes proved that positive change could still be affected by walking out and demanding more. 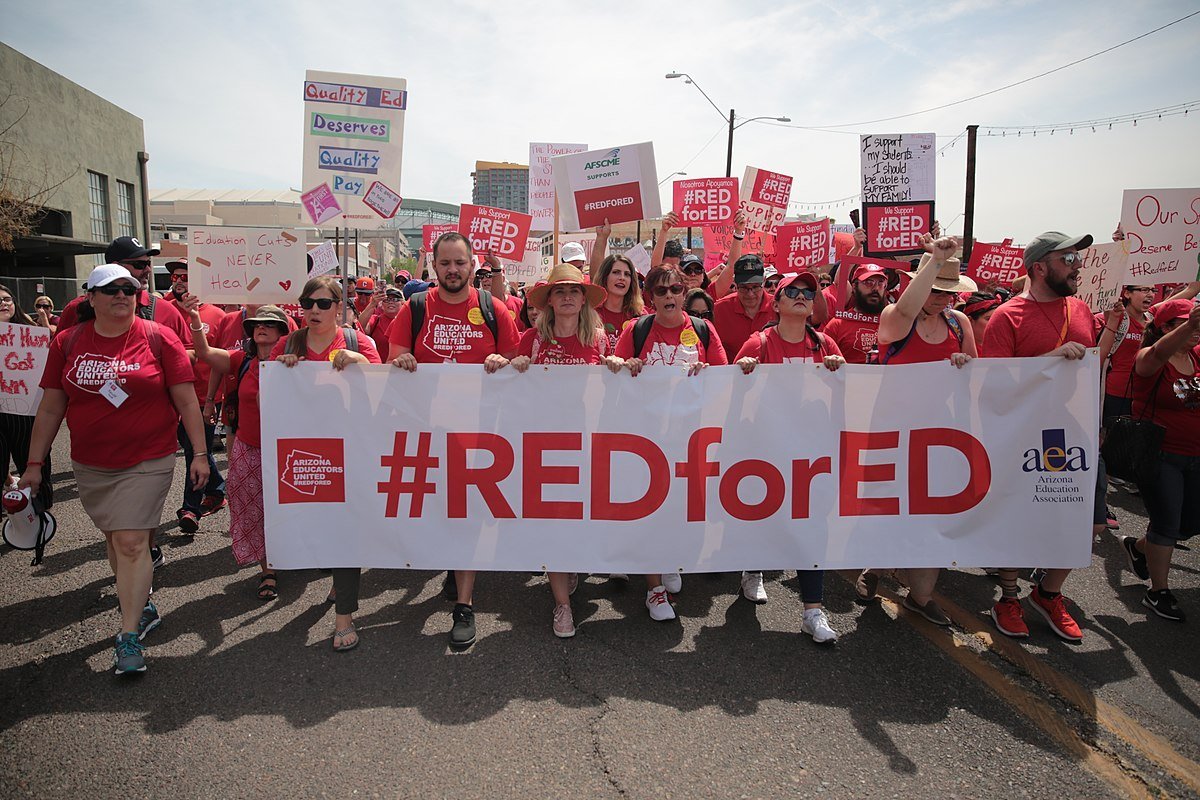 Much has changed since workers first paraded through New York City in 1882, but today workers continue to advocate for themselves and their coworkers. This Labor Day, we honor American laborers past and present. And to the essential workers who have weathered the pandemic and may not get to take today off from work—thank you for everything you do.