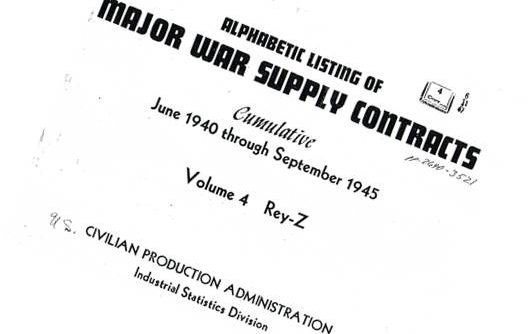 The federal government does much of its business through contracts. These documents define the relationship between the government and its contractors. Sometimes, years later, disputes arise involving the work performed under these agreements. Knowing the terms and context of these documents has helped our clients to resolve a variety of long-standing environmental, toxic tort, product liability, or contract claims issues.

However, locating copies of historical federal contracts can be quite challenging. As a start, the government’s own records retention schedule allows its agencies to destroy most official contract files six years and three months after final contract payment. Second, although there are publicly-available databases of information about contracts awarded, these databases do not contain actual copies of contracts, nor do they tell where such contracts may be stored. To further complicate the matter, historical federal contracts are rarely arranged by contractor name—the contract number is typically the identifier. These challenges are further exacerbated by the fact that federal records repositories rarely maintain large collections of contracts.

From our experience researching contracts for our clients, the key to searching for copies of historical federal contracts is first to learn as much as possible about the contract, including its number, date, and contracting agency.

For Example: The Navy and Anheuser-Busch

Suppose we wanted to document the amount of beer that the U.S. Navy purchased from Anheuser Busch in 1966. As historians, we would start with the knowledge that that this purchase was likely made by the Ships Shore Office (NSSO), which was historically responsible for operating Navy Exchange facilities for Navy personnel and their families.

With this information, we can begin to search for information about relevant contracts. There are a number of publicly-available Department of Defense (DoD) data sources that we can search to identify prime contract actions from the mid-1960s to the present. History Associates maintains a proprietary database of DoD prime contracts, which is an aggregate of publicly available data that we use to expedite contract searches. Our database combines data to help locate copies of DoD contracts in federal archives or through targeted FOIA requests. For all of these databases, it’s important to note that information about the contract is included in the database—not copies of the actual contract. These databases only serve as tools for narrowing the search.

By searching our proprietary database, we learn that during FY 1966, NSSO let five separate contracts with Anheuser-Busch’s Los Angeles brewery, for a total rounded value of $1.23 million, or $9.12 million today (calculated using the Bureau of Labor Statistics Inflation Calculator).

In addition to giving us basic information on these contracts (e.g., contract number, date, and value), DoD’s data also tells us that these were firm-fixed price contracts (Contract Type “J”) for “beverages, alcoholic” (FSC Description). The latter information refers to the heading under which the contracted commodity can be found in the Federal Supply Catalog, which is the standard government reference that lists all commodities approved for government purchase.

Even with all this information, though, we cannot immediately search for copies of the referenced contracts. This is because the contract number listed in the database has been truncated. The U.S. Government uses a consistent numbering scheme for identifying procurement “instruments,” which is comprised of a minimum of 13 digits. However in 1966 when DoD began to computerize its data, the available electronic media (that is, punch cards) limited the amount of data that DoD could record. In the interest of capturing as much data as possible, DoD compressed certain data during the process, including contract numbers. 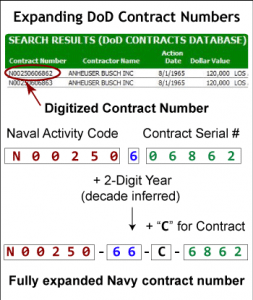 Therefore, in order to search for one of these Anheuser-Busch contracts today, we first need to expand the DoD’s truncated 12-digit alphanumeric contract number into its proper 13-digit format. Here is how we would expand the first contract on the list that the Navy awarded to Anheuser-Busch: N00250606862.

Now that we have decoded the truncated number into an actual contract number, we can use our experience to search for a copy of the contract and contract-related correspondence at places such as the National Archives or other federal records repositories. At the National Archives, for example, we could target historical records from the U.S. Navy’s Bureau of Supplies and Accounts and the Naval Supply Systems Command, which we know to be parent/successor agencies to the Navy’s Ships Store Office. We could also submit FOIA (Freedom of Information Act) requests to the Naval Supply Systems Command and the Navy Exchange Service Command—present-day successors to NSSO—for a copy of the contract. Now, if we could only find the contract number for the bottle opener.

For more information on History Associates’ proprietary DoD Prime Contracts Database, or to request a federal contracts search, please contact us at info@historyassociates.com.

Critters in the Catalog – Taxidermy and Historical Archives
How to Make the Most Out of Your Company’s Anniversary
Unfreezing 1923: How the Reopening of the Public Domain Opens Doors for Museums
The History and Use of the Defense Production Act