National Hispanic Heritage Month, celebrated from September 15 to October 15, gives us a chance to reflect on and celebrate the social and cultural contributions of Americans with ancestral roots in Spain, Mexico, Central America, the Caribbean, and South America. The idea for the celebration emerged in the midst of the civil rights movement of the 1960s, as activists pushed for greater awareness of the multiracial and multicultural nature of the United States. In 1968, Democratic Congressmen Edward Roybal and Henry Gonzalez advanced a bill proposing a weeklong celebration of Hispanic and Latinx people, which President Lyndon Johnson signed into law. In 1987, Representative Esteban E. Torres proposed a bill expanding the celebration to a full month, remarking that its proponents “want the American people to learn of our heritage. We want the public to know that we share a legacy with the rest of the country, a legacy that includes artists, writers, Olympic champions, and leaders in business, government, cinema, and science.” The measure died in committee, but Senator Paul Simon submitted a similar bill in 1988, which President Ronald Reagan enacted on August 17 of that year. 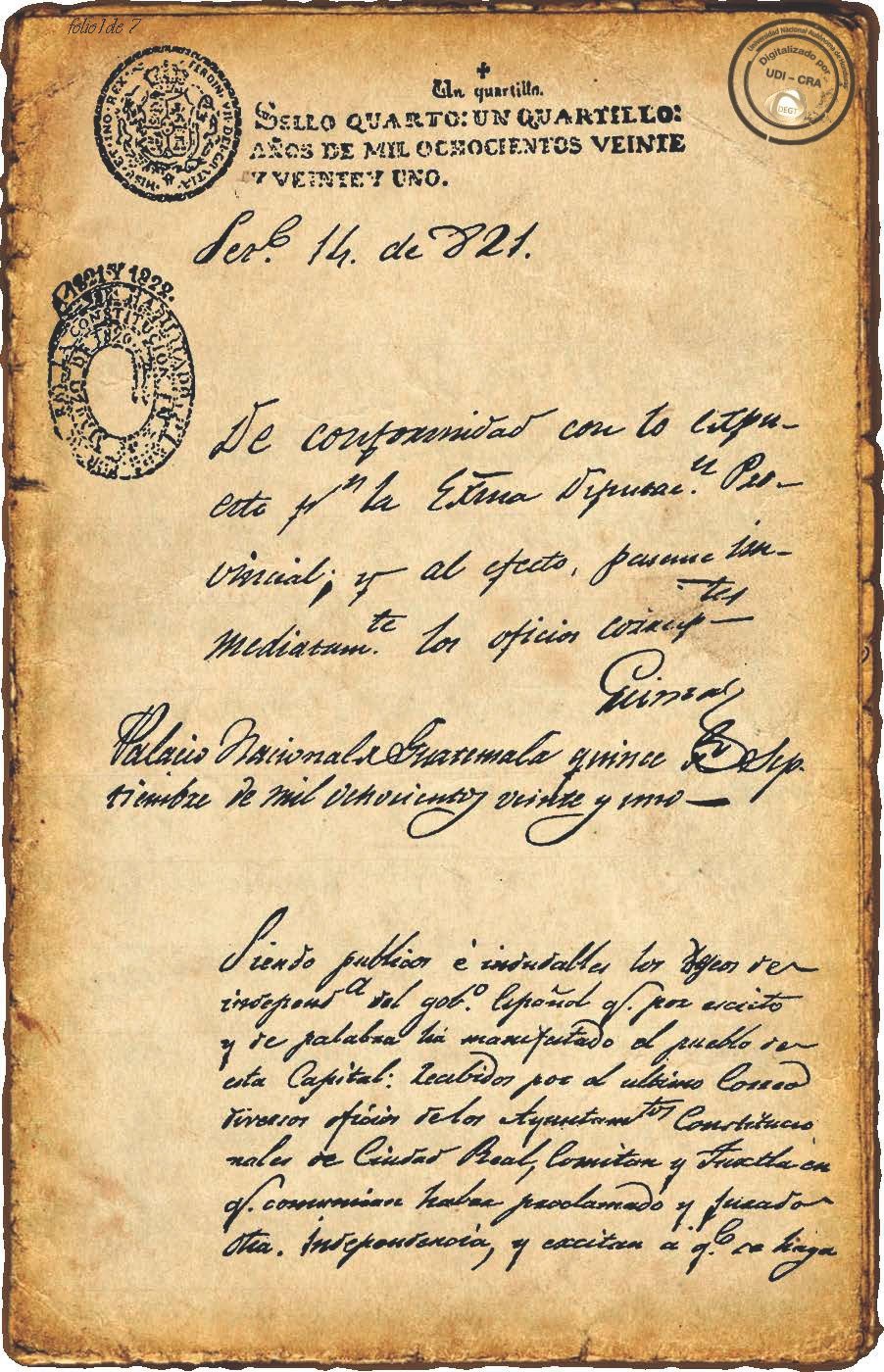 National Hispanic Heritage Month intentionally begins on September 15—on that day in 1821, five countries gained independence from Spain. The Age of Exploration and Discovery decimated and subjugated local populations, beginning with Hernán Cortés’s expedition in 1519. From that point forward, Spanish conquistadores made inroads in other territories, invading and conquering as they went. By 1532, the territories they’d captured included modern-day Guatemala, Nicaragua, Costa Rica, El Salvador, and Honduras. Nearly 300 years later, these five countries officially became sovereign states through the “Act of Independence of Central America.”

National Hispanic Heritage Month was created with these political milestones in mind. We have often celebrated dissent like this—and, indeed, the American experiment inspired the independence movements of Latin America. The spread of ideas, philosophy, and culture flows both ways. Some of the most iconic and influential murals that adorn the American landscape are the work of Mexican artist Diego Rivera. Rivera elevated the timeless art form of public murals. He and the artists he inspired used art to advance social and political causes, spotlight the lives of American workers, and call attention to social inequity.

Rivera believed in accessible art. Rather than focusing on the elite or the religious establishment—as many other notable artists had—he wanted his work to appeal to and reflect the common man. After studying art abroad, he returned to Mexico and, in 1921, began working with the government mural program. Farmers and laborers were central to his art.

Rivera’s work was not limited to Mexico. In the United States, he painted murals at places such as the California School of Fine Arts, the American Stock Exchange Luncheon Club, and the Detroit Institute of the Arts. Although Rockefeller Center commissioned a piece from Rivera, the mural’s communist leanings, and implicit criticism of the Rockefeller family and their patrons, proved too controversial; that piece, never finished, was ultimately chipped away from the building in 1934.

Rivera recreated the Rockefeller Center mural at the Palacio de Bellas Artes in Mexico City after its destruction. Named “Man, Controller of the Universe,” it depicts communist revolutionary Vladimir Lenin on the right, and a portrait of John D. Rockefeller Jr., drinking a martini, on the left. Source: Museo Frida Kahlo

In the words of Edsel Ford, who helped commission the work at the Detroit Institute of Arts (DIA), “I really believe he was trying to express his idea of the spirit of Detroit.” Beginning his mural project in 1932, Rivera studied Detroit’s industry—from Ford’s automobile assembly lines to the city’s medical and chemical companies. Although the assembly line workers draw immediate attention, other paintings show office workers, agricultural workers, and even vaccination. Rivera finished the murals in about eight months, as the Great Depression wore on.

The Detroit Institute of Art’s decision to hire Rivera stirred up controversy. The Detroit News called the piece un-American. Others pondered why the Institute, and Edsel Ford, selected Rivera instead of employing an American artist. To their credit, both DIA and Ford stood by their decision, and Rivera considered the Detroit murals to be among the best of his career. 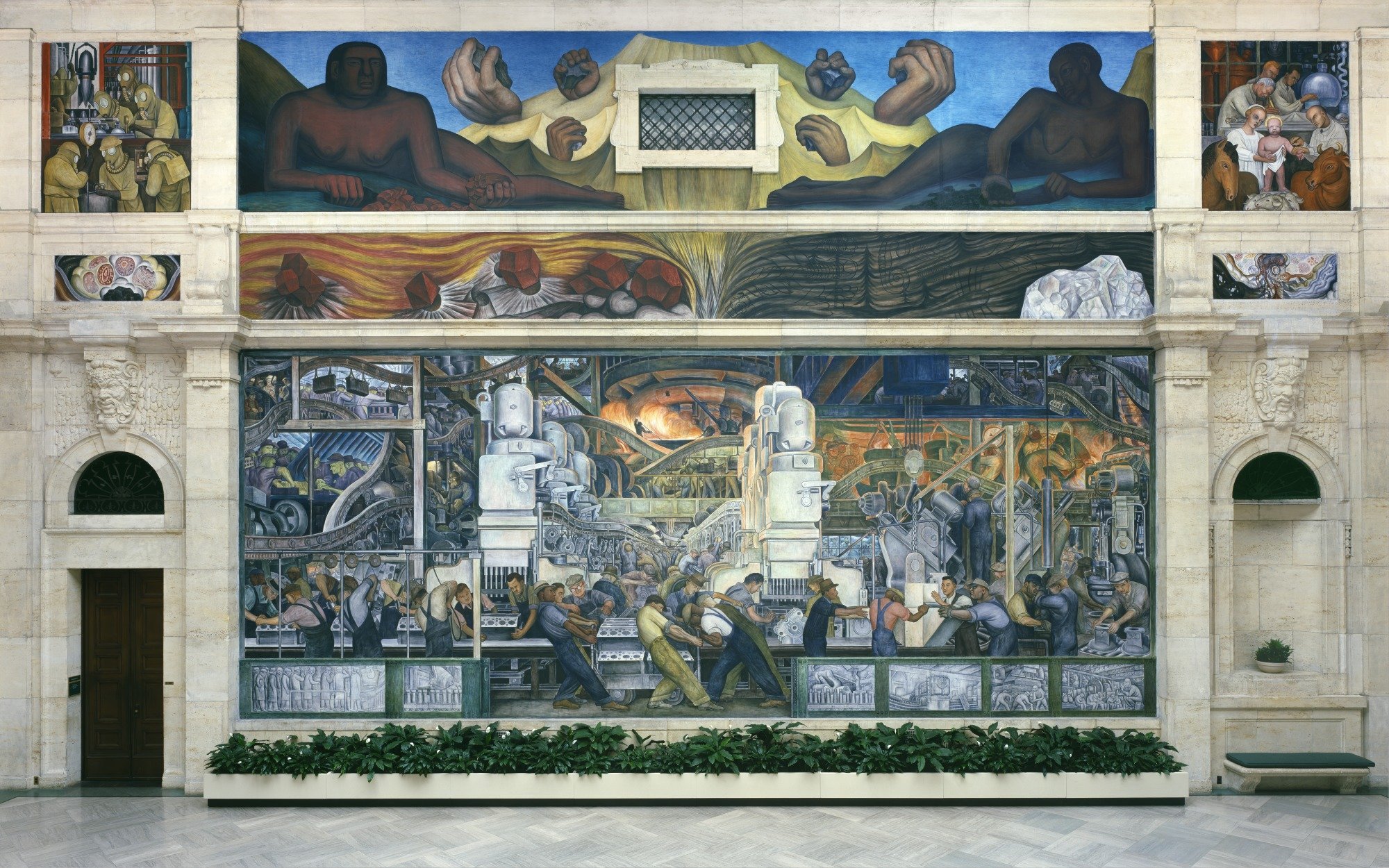 We can see the progression from Rivera’s frescoes to the work the federal government commissioned during the Great Depression. In 1935, amidst a wave of New Deal programs, the Federal Art Project created work for artists of all media types, leading to the creation of over 225,000 works of art. New Deal muralists focused on many of the same themes and issues as Rivera. WPA muralists created art that invoked history and American life and livelihoods. Louise Nevelson, known for her sculptural work, even worked for the WPA as a mural assistant to Rivera.

Anton Refregier created this mural, one of twenty-seven at the modern-day Rincon Center in San Francisco, California, as part of a WPA project. Much like Rivera’s, some greeted it with derision and disdain. Source: Library of Congress

Controversies aside, Rivera’s prominence and influence continued to grow. He painted during the Golden Gate International Exhibition. During the San Francisco exhibition, he participated in “Art in Action,” inviting visitors to observe and interact with him. FDR’s March 17, 1941 speech at the dedication of the National Gallery of Art echoed Rivera’s sentiments: ”The people of this country know, now, whatever they were taught or thought they knew before, that art is not something just to be owned but something to be made: that it is the act of making and not the act of owning that is art. And knowing this they know also that art is not a treasure in the past or an importation from another land, but part of the present life of all the living and creating peoples—all who make and build; and, most of all, the young and vigorous peoples who have made and built our present wide country.”

Rivera painted “Pan American Unity” during the Golden Gate International Exhibition. The mural “is about the marriage of the artistic expression of the North and of the South on this continent,” Rivera noted. Source: Diego Rivera Mural Project

Diego Rivera’s impact on American mural art showcases the influence of just one person on the cultural heartbeat of the United States. Hispanic and Latinx communities are an integral part of the American experience—from the cultural and social to the scientific and economic. For additional resources and information about this wide-ranging impact, please visit the official website of National Hispanic Heritage Month 2020.