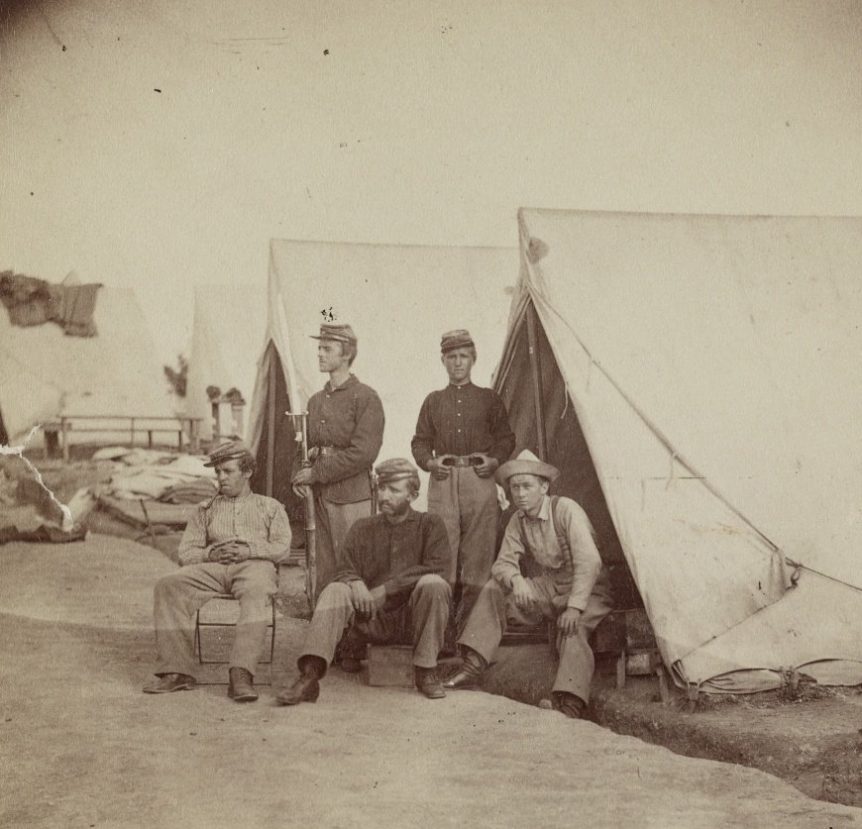 From 1861 to 1865, Union and Confederate armies battled for control of the town of Harpers Ferry in present-day West Virginia. Although best known as the site of John Brown’s attempted war against slavery, the town’s location made it a key target for both armies. Standing at the confluence of the Potomac and Shenandoah Rivers and the intersection of the Winchester & Potomac and Baltimore & Ohio railways, it was a major transportation hub. The war transformed Harpers Ferry. Though many residents fled, the city’s population skyrocketed from around 3,000 in 1859 to tens of thousands by the fall of 1864 as soldiers, civilian employees, and self-liberated former slaves poured into the town. The crowded conditions made it easy for disease to spread. 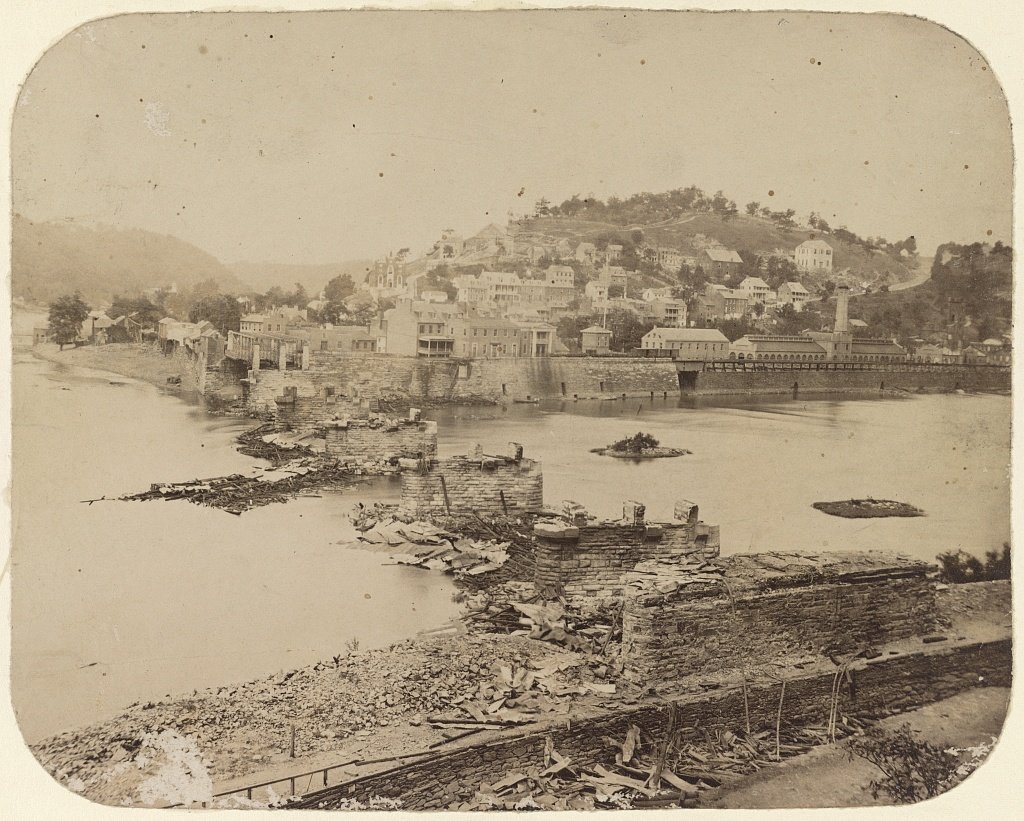 Harpers Ferry suffered significant damage during the war as both armies dueled for control of the strategic location. Source: Library of Congress 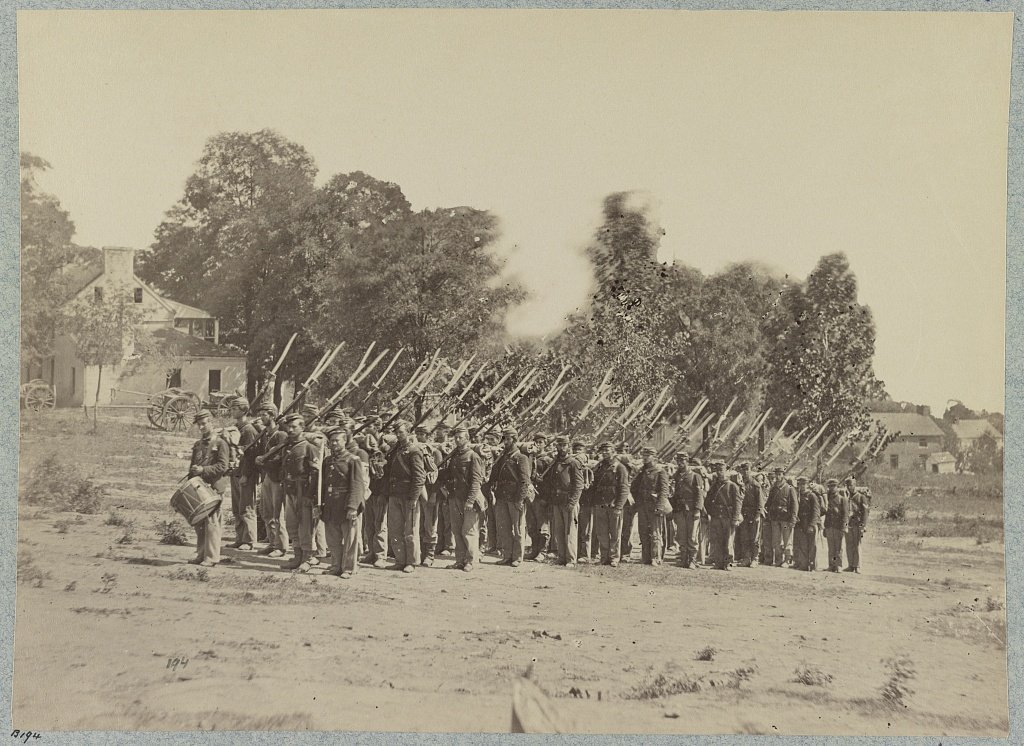 A company of the 22nd New York near Harpers Ferry. Source: Library of Congress

Disease killed around two-thirds of the soldiers who died during the Civil War. In an era before widespread knowledge and acceptance of germ theory, the camps of both armies became breeding grounds for bacteria and viruses. As soldiers converged on Harpers Ferry, the supply of safe drinking water disappeared. Diarrhea became so prevalent that the entire 22nd New York regiment was out of action for a week. Military commanders eventually forbade soldiers from drinking from any water source in Harpers Ferry, unless they first mixed the water with whiskey.

Other afflictions were harder to fight. Typhoid, dysentery, and pneumonia took an immense toll. Many of the soldiers and self-liberated former slaves who crowded into town had not been vaccinated against smallpox, resulting in the establishment of a hospital facility specifically for the disease in the nearby town of Bolivar. Charles Moulton, a soldier with the 34th Massachusetts, noted, “everybody here is about skeered to death just now in regard to the small pox,” before coming down with a mild case of the disease himself.

The tents of the self-liberated sit in the ruins of the federal armory within sight of John Brown’s Fort. Cramped conditions, poor housing, and limited rations and supplies from the government created ideal breeding grounds for disease. Source: Library of Congress

The smallpox outbreak was considerably more dire for the freedmen and women in the refugee camps. Many of the self-liberated, who had risked their lives to escape slavery, received only minimal government support and lived in crowded tents near the old armory. Like the soldiers, they lacked access to safe drinking water. When smallpox broke out among them, many soldiers and civilians blamed the self-liberated themselves, rather than the poor conditions in which they had been forced to live. The unsafe conditions of the freedman’s camps in Harpers Ferry and around the country prompted action from concerned citizens. Both Harriett Tubman and Sojourner Truth traveled to freedmen’s camps elsewhere in the United States to provide assistance to the self-liberated.

Doctors, nurses, and stewards did the best they could with the limited medical information they had. At Harpers Ferry and elsewhere, doctors requisitioned private buildings for use as hospitals for the sick and wounded. The cotton factory on nearby Virginius Island, the Lockwood House on Camp Hill, and several churches all served this crucial function. 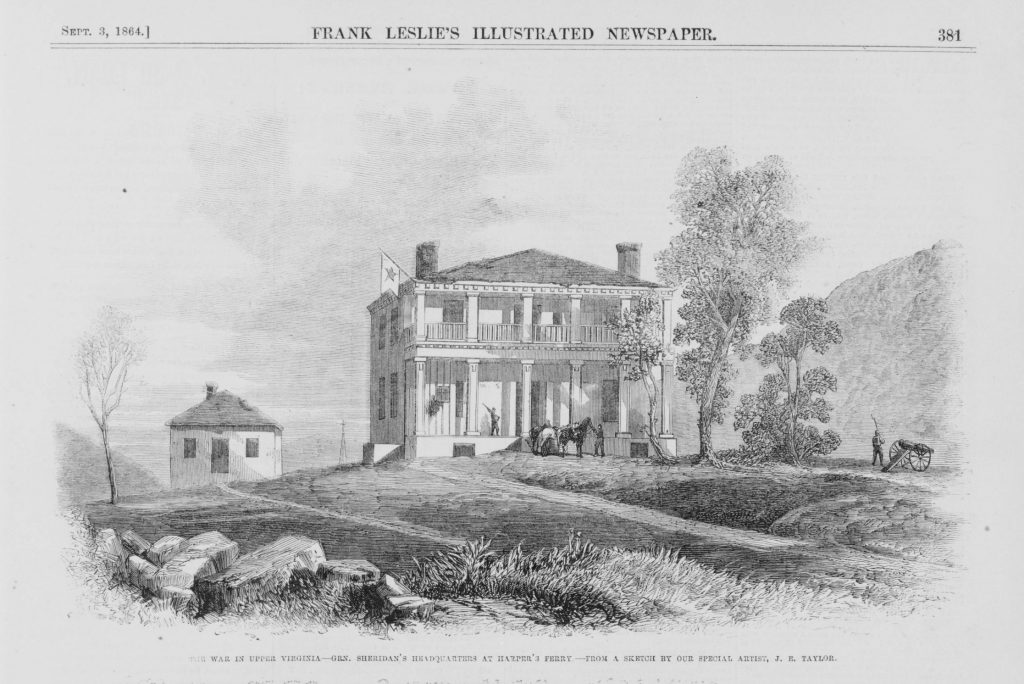 During the Civil War, this vacant two-story Lockwood House was converted into a hospital. Known as the Clayton General Hospital, it previously housed officials of the nearby armory. Source: The Library of Congress

Abba A. Goddard served as the head matron of the Clayton General Hospital (today’s Lockwood House) during the early days of the war. The house offered expansive balconies, large rooms, and a wide-open yard where tents could house overflow patients. Ms. Goddard solicited donations from her friends and supporters in her home state of Maine and made trips to Baltimore to purchase supplies. During the 1862 siege of Harpers Ferry by Stonewall Jackson’s Confederate forces, Goddard remained indomitable as shells landed all around. When the city surrendered, Goddard hid her African American staff within the Lockwood House, away from Confederate slave catchers, and stayed to guard them with her revolver.

To support the war effort, several organizations—including the U.S. Sanitary Commission and the Christian Commission—worked to improve the health of the Union soldiers with better supplies, medical equipment, and camp inspections. These groups sponsored massive fundraising efforts to purchase needed materials. Army quartermasters sorely needed this supplemental support. As one member of the Christian Commission reported in 1864, in Harpers Ferry, “bandages, rags, linen, and lint are greatly needed.” Despite their efforts, disease remained a persistent foe.

The land around Harpers Ferry filled with thousands of new graves during the war. To provide some comfort to the families of these soldiers, Mary Catherine Ames, a nurse at the Lutheran Church, collected the personal items of the departed and sent them to their families. Of these mementos, she noted, “the boys who owned them will never go back. To one unfamiliar with the solder’s life these relics might mean little. To me, they mean all love, all suffering, all heroism.”

“A little drummer boy died yesterday… I thought as I looked upon him yesterday, wasted and dead, that I was glad that his mother could never know how he changed before he died. I have sent his last message and all his things to her.”

When the conflict finally ended, a visitor to Harpers Ferry glumly noted, “at my feet, stretching far down the hill, were the graves of our Union dead. Dismantled forts, crumbling earthworks, grass, grown rifle pits, visible on every side.” Yet there were glimmers of hope and rebirth. As the Union dead were reinterred in cemeteries, farmers again cultivated the fields around the city.  The Lockwood House, where Abba Goddard had treated her patients, became the first building of Storer College, set up to educate the formerly enslaved. The college educated generations of students until it closed in the 1950s. Today, the soldiers, self-liberated, humanitarians, and medical staff who battled the diseases and epidemics of the Civil War live on through the staff and volunteers at Harpers Ferry National Historical Park who tell their stories.