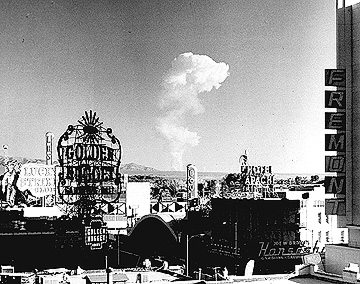 Upon winning a championship or leaving office, sports figures and politicians are often asked to speculate about their legacy. Although leaving a legacy is something one may aspire to, it is really only something we see in retrospect. Such reflection requires perspective.

Let me share a case in point in the context of History Associates’ 35th anniversary.

It began, like many of our projects, with a crisis. A decade after atomic testing went underground, veterans who witnessed the blasts and citizens living downwind of the Nevada Test Site expressed growing concern about the possible health effects of radioactive fallout and pressed their government to open the records of these highly classified activities. Responding to lobbying and lawsuits, the Department of Energy (DOE) established the Coordination and Information Center in Las Vegas, Nevada, to provide public access in one place to records and data documenting the atomic testing operations. This collection, now known as the Nuclear Testing Archive (NTA), opened in July 1981. 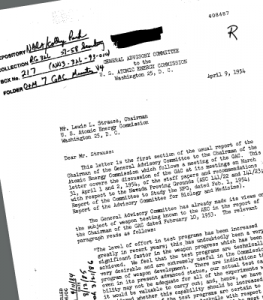 By then History Associates was already deeply involved in collecting relevant records from more than 100 widely scattered government, university, and private collections to include in the growing NTA. Research to gather evidence regarding testing policy and operations, and collect fallout data was only the first step. Carefully annotating each document with its source location and processing all materials through classification review were essential to ensure the NTA’s authenticity and transparency. For more than a decade, what we called the “Nevada Project” expanded to cover a broader time period and atomic testing in the Pacific. We also provided additional professional support such as capturing oral histories of test officials and scientists. DOE’s former Chief Historian Jack Holl estimated the project provided public access to over 4.5 million pages—roughly half of which were previously classified.

During the 1980s scientists, lawyers, public officials, and citizens used information from the NTA to conduct complex radiation dose reconstruction studies, pursue legal actions, and enact legislative compensation. By 1990, politically crafted compensation programs brought some closure to the crisis that produced the archives.

But the Nuclear Testing Archive lives on. Still operated under DOE auspices, its primary custodian, Martha DeMarre—the person who received the documents we collected in the 1980s—will respond to your research request today. Although housed in the same building as the National Atomic Testing Museum just off the strip in Las Vegas, researchers can now search the archive’s contents and access an increasing number of its documents in digital form using the DOE’s OpenNet database from virtually anywhere in the world. A documentary film researcher and self-described history geek from New Zealand found searching the NTA exhilarating: “…decades ago spies would’ve killed to get their hands on records which are now declassified and available to anyone.” Veterans and “downwinders” still search the archive to support compensation claims. The NTA is “a great resource” for a new generation of scholars and students who are exploring nuclear history.

Slated for preservation as part of the National Archives, the Nuclear Testing Archive will outlive those of us who helped bring this chapter of our history to light. The archive is a fitting and valuable legacy which documents the origin and context of the radioactive fallout that will remain detectable well into the future.

We did not always see it that way. In the 1980s the Nevada Project set one of our founder’s “teeth on edge,” because he saw it drawing the company away from higher forms of history. Reconsidering the project at our 20th anniversary we recalled its critical role in the company’s early financial success. Today it is easier to see the public service we performed and how our work continues to serve broader audiences than we could have imagined at the outset.

The word legacy refers to a bequest of something valuable from the past. The impulse to share the past with future generations seems to be part of our human nature. Discovering and sharing legacies is often the impetus behind an oral history project, an anniversary book, a commemorative exhibit, or even establishing an archive. The passage of time and some appropriate professional distance, in a word—perspective, enhances our ability to capture and communicate such legacies.

The headline image is a view of downtown Las Vegas with a mushroom cloud in the background. Scenes such as this were typical during the 1950’s. From 1951 to 1962 the government conducted 100 atmospheric tests at the Nevada Test Site. Photo courtesy of National Nuclear Security Administration / Nevada Site Office.

For our 35th anniversary, we shared further insights – ideas on how to use history to reinvigorate the present, ideas for your archives, and creating history timelines. Read more posts from the series or subscribe above to receive automatic updates!

Confrontation with the Past: The Legacy of American Indian Boarding Schools in the United States
Critters in the Catalog – Taxidermy and Historical Archives
How to Make the Most Out of Your Company’s Anniversary
Chronicling Health and History: HAI’s Decades-Long Collaboration with the NIH