Great Britain and Spanish signed the Asiento contract, a provision of the Treaty of Utrecht, in 1713. This granted Great Britain a monopoly on transporting enslaved people to Spanish colonies in the Americas. Source: Wikimedia

The conversation about racism that is now occurring in the United States—and around the globe—is belatedly turning attention to the historical links between financial institutions and the slavery of people of African descent. HAI has undertaken slavery disclosure research for financial, insurance, and educational entities in the United States and Europe for upwards of fifteen years and applauds these efforts to expand our collective understanding of the pervasive nature of the institution of slavery. It demonstrates that, while we often conceive of slavery as confined to Southern states, in reality it was connected to the entire American financial system and helped build fortunes across the country and the world.

The 13th Amendment abolished slavery in the United States on December 6, 1865. Prior to this, many financial institutions—including state banks, regional banks, and insurance companies—had links to the trans-Atlantic and intra-American slave trade. Some firms enslaved people or had direct involvement in the slave trade. Other institutions provided capital to individuals or businesses that enslaved people. Many invested in bonds from Southern states that held people in slavery, or traded in goods produced by enslaved people, such as sugar, cotton, tobacco, and rice. During the course of the 1800s and 1900s, these public and private firms merged or coalesced into today’s largest U.S. and global financial institutions. Unfortunately, many modern firms remain unaware that their history—and prosperity—is intertwined with the institution of slavery.

In the early 2000s, HAI began providing historical research services to financial institutions that were required to submit Economic Disclosure Statement (EDS) and Affidavits with the City of Chicago. In 2002, the Chicago City Council passed an ordinance requiring entities conducting business with the city to disclose their historical connections to the slave trade, and specifically, to provide records of investments or profits from slavery or insurance policies of enslavers. Among the information required in the regulatory filing are the full “names of any and all slaves or slaveholders” linked to the firms or their predecessor entities. Entities that fail to provide this information risk having their contracts with the city voided.

A 2005 Wall Street Journal article describes one of HAI’s earliest slavery disclosure research projects and chronicles our work in investigating one financial institution’s historical connections to slavery. This independent historical research, which entailed over 3,000 hours of research, involved a team of over a dozen professionally trained and experienced research historians who contacted or visited over 75 archival facilities. This research effort identified over 13,000 enslaved people linked to predecessor banks.

Since then, our team has worked with numerous financial, insurance, and educational entities in the United States and in Europe to reconstruct the dark recesses of their past. For many clients in the United States, we have confirmed that the corporate or financial entity and its predecessors were founded well after the United States abolished slavery of people of African descent. For others, we have undertaken detailed corporate genealogies of all predecessor firms founded prior to 1866. In these cases, our research becomes more complex, requiring a thorough search of existing corporate records and histories, financial ledgers, and property records held in private and public archives.

While reviewing these historical records, HAI researchers examine a number of questions to help identify any potential links to slavery: Did the firm enslave people or participate directly in the slave trade? Did financial institutions make any loans to institutions or individuals that enslaved people? Did insurance companies sell policies to compensate enslavers if the people they enslaved were injured or killed? Did the company invest in institutions that used enslaved labor, such as sugar and cotton plantations, or did it invest in bonds from Southern states or Southern firms that enslaved people, such as railroad companies? Did it trade in goods produced by enslaved people? 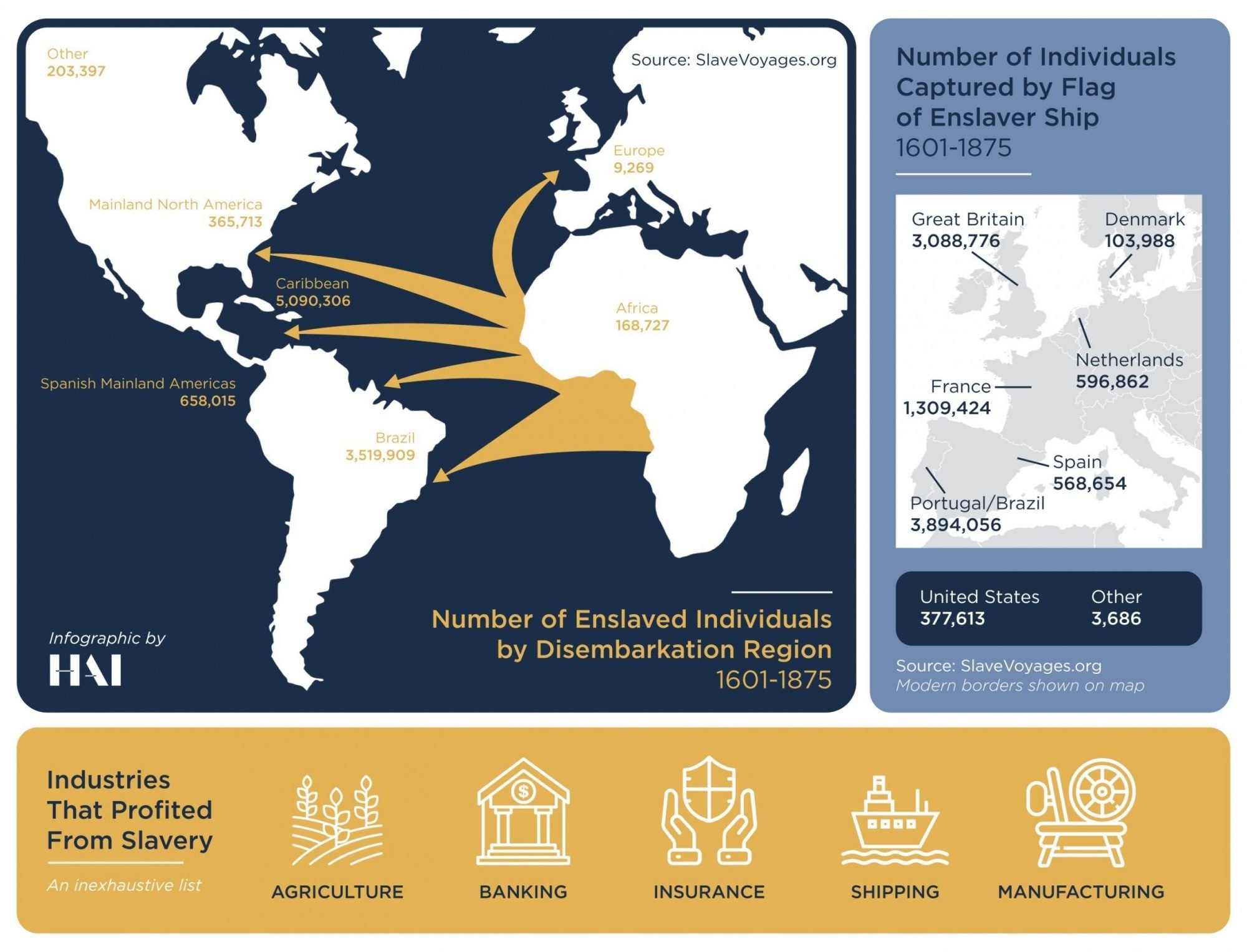 Historical research in national and international archives, libraries, and other repositories, such as the courthouse in St. Louis, Missouri, provides important details about businesses’ ties to historic slavery. Source: Wikimedia

Our international clients come from European countries with long histories of engaging in the transatlantic slave trade. Although many abolished trafficking of enslaved people on the continent and in their colonies decades before the United States, European financial and insurance institutions continued to have routine business dealings with enslavers in the Americas, including in Brazil and Cuba, where enslavement of people of African descent continued until the late 1880s. Examining historical sources in European, Central American, and South American repositories to learn about the history of European predecessor institutions, HAI researchers seek to answer related questions about how financial firms and insurance companies may have benefitted: Did the bank or finance house have direct ownership of plantations in the Americas? Did the firm provide capital or insurance to plantations or enslavers? Did it make loans to individuals or institutions enslaving people in the Americas, or invest in colonial possessions that relied heavily on enslaved workers?

Our research helps institutions meet state and local regulatory requirements but it also serves as an important reflection moment for companies, enabling them to contemplate a legacy most had neither known nor suspected. Most importantly, however, the effort helps memorialize, albeit in a very small way, the names of thousands of enslaved people who the historical narrative has long ago forgotten.

Planning Successful Virtual Interpretive Workshops and Visioning Sessions
When Will U.S. Libraries and Archives Reopen? The Status of COVID-19 Closures and the Global Historical Supply Chain
Breaking Ground: The United States Olympic and Paralympic Museum Opens to the Public
"In the Eye of a Hurricane": Taking a Stand at the 1968 Olympics