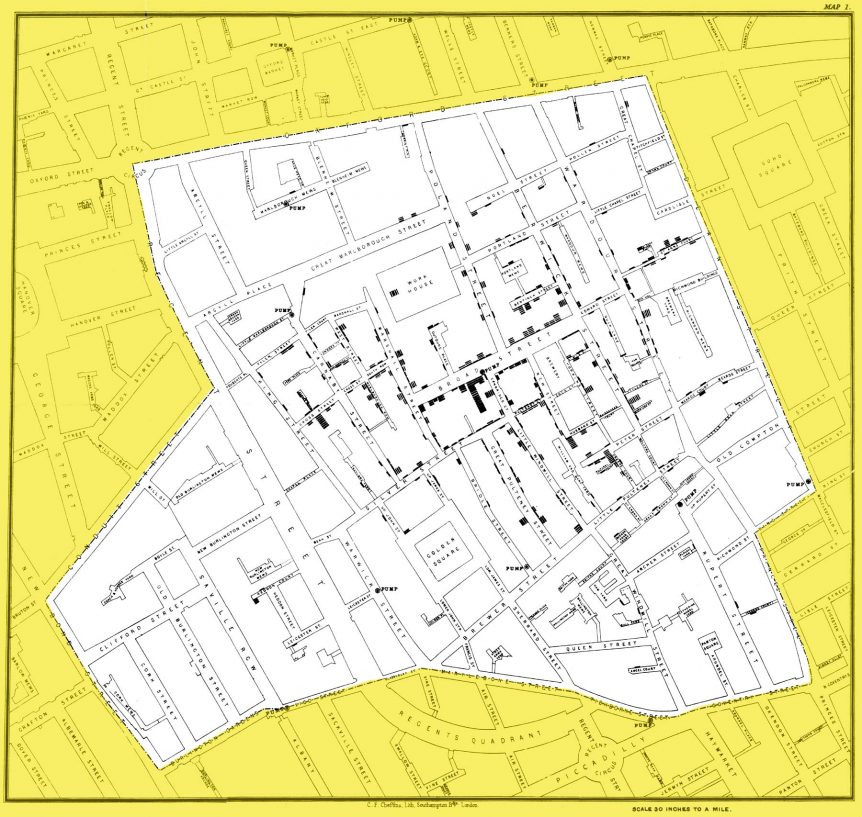 Lately, I’ve been thinking about the work data visualization can do to make meaning and provoke action. Every day, it seems, we are inundated with new charts and figures that present as objective demographic and geographic analysis of the coronavirus pandemic. Some, like the now-ubiquitous “flatten the curve” graph, are very useful in illustrating the gravity of the worst possible outcomes and the positive effects of precautionary measures. But quantitative visuals have a way of asserting objectivity, shrouding the fact that they privilege certain angles and information. What gets lost in these presentations? In particular, what about the qualitative, human experiences we could glean from data sets and associated visualizations?

Coronavirus Victims as Casualties of War

Since March, we’ve relied heavily on quantitative visualizations to help make sense of the pandemic and provide ever-changing status updates. As the United States’ official death toll from COVID-19 climbed into six figures, we saw increasing attempts to liken the virus to an enemy in a war, its victims like casualties sent into battle or caught in the crossfire. The hard numbers now lend themselves to comparisons with those from major wars that live in our collective national memory. COVID-19’s U.S. death toll passed that of 9/11 in March, but then came casualty comparisons to the Korean War, the Vietnam War, and now World War I.

Framing the pandemic alongside these calamities might seem like a natural fit for historians, as we often deal in the facts and legacies of these monumental conflicts. And there is something powerful in linking losses from an invisible force—a virus—to tangible ones that wreaked immediate, evident destruction. It can be a grounding and sobering juxtaposition, especially for those who might otherwise dismiss the seriousness of the pandemic. It can incentivize appropriate wartime measures, like the use of the Defense Production Act to lawfully mobilize the supplies and finances needed to mitigate the health crisis. 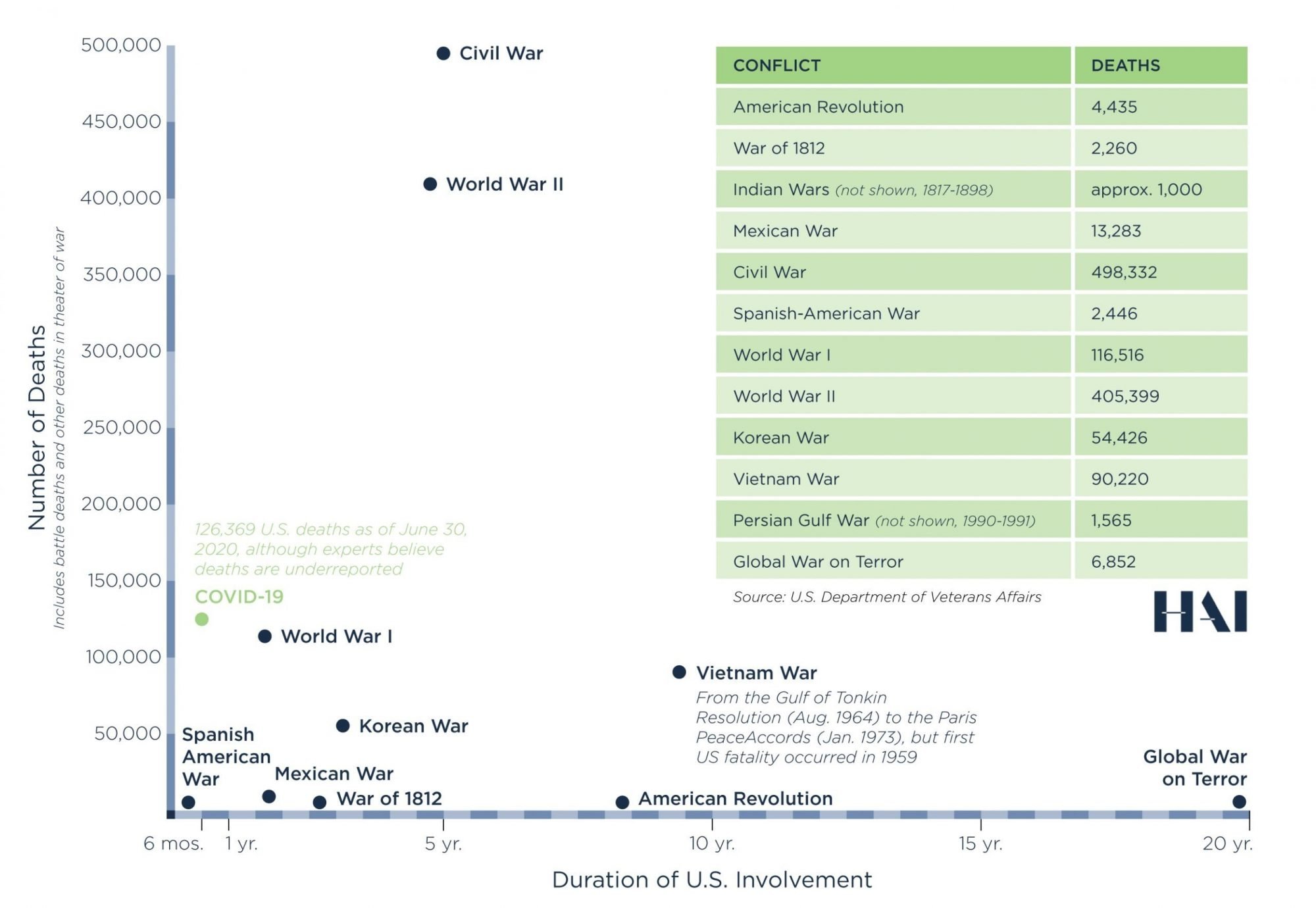 At the same time, it’s important to be careful about how far we take those comparisons and attentive to the visuals that express them. There are many elements to this tragedy that set it apart from traditional conflicts. War encourages the obvious us-vs-them dynamic and physical strength-in-numbers camaraderie, standing in such stark contrast to the pandemic. The coronavirus has no sense of loss or sacrifice, no interest in ceded land or terms of surrender, and few limits to its theaters of contagion. Its casualties are more diverse in demography and circumstance.

Data models and their visual rhetoric tend to collapse these differences and lived experiences — the fear, the grief, the purpose, the solidarity — that accompany them. Instead, the priority is often to create something “computationally tractable,” to borrow a word pair from digital humanities professor Willard McCarty. Put another way, the standard appeal of data visualization is its capacity to turn large sets of quantitative information into something easily consumable. For that very reason — the broad appeal, the easy-to-consume quality—we should be wary of careless or manipulated data use. Even particularly clear, useful, and well-intentioned visuals have limits to what they show.

As popular as data visualization is in today’s media landscape, virus-related or not, it is hard to imagine a time before it was so common. In the fall of 1849, on the heels of a cholera epidemic, The New York Daily Tribune published a graph charting cholera deaths and total deaths in New York City over the course of the summer. Perhaps in acknowledgment of the medium’s novelty, several paragraphs below the graph explain how to interpret it.

It’s not clear who or what directly prompted the printing of this then-unconventional graphic — perhaps it was a new scheme to sell more papers than the Tribune’s competitors. Or maybe it was an expression of personal tragedy, as editor Horace Greeley’s son had recently and suddenly lost his life to cholera. What is clear, however, is that this chart reflects the early use of data illustrated in visual form for a broad audience and a dawning sense of that medium’s potential efficacy. 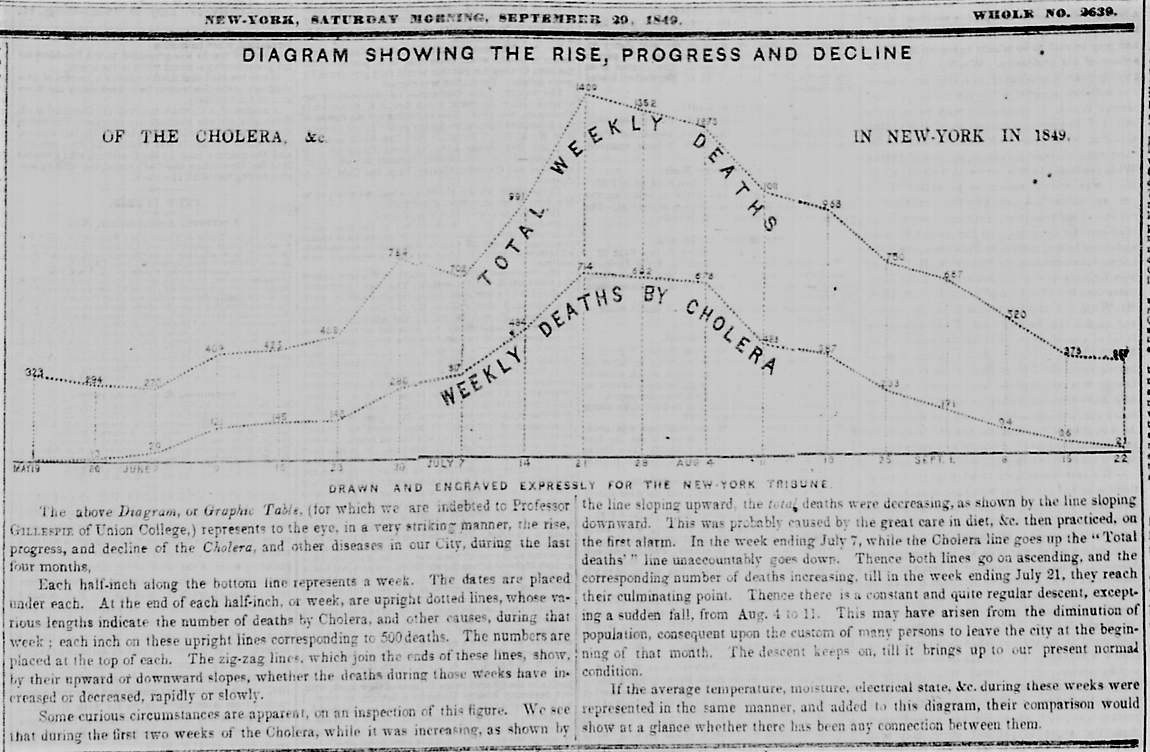 The following decade brought a new bout of cholera and a new visual to illustrate it: John Snow’s well-known 1854 map of a London outbreak, marked with black bars to signal household deaths from cholera. Scholars debate whether Snow used the map to locate the source of infection or reconstructed it after the fact, but it’s undoubtedly a landmark example of useful data mapping. Viewing the clusters of casualties from overhead, one can trace the outbreak to a particular contaminated water pump; city officials ultimately removed that pump, and cholera cases declined swiftly. Alongside its clear utility in the 1850s, Snow’s map is also an interesting entry point into the underutilized roles of graphical expressions today. 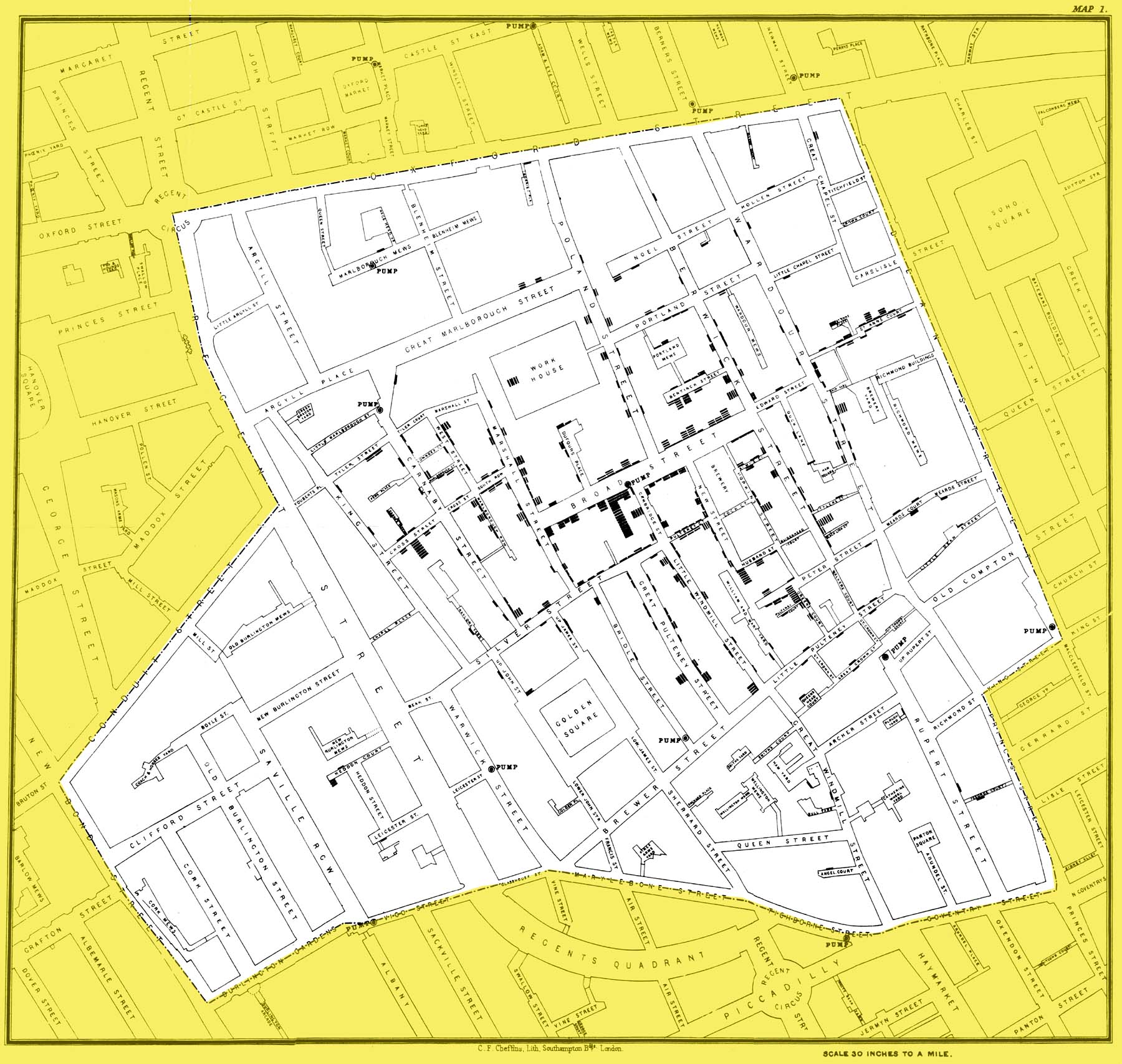 Dr. John Snow’s 1854 map of a cholera outbreak in a London neighborhood, highlighted here in white, traces the infection to its source through clusters of black bars indicating fatalities. Source: UCLA Fielding School of Public Health

Visual theorist Johanna Drucker’s article “Humanities Approach to Graphical Display,” pivots on approaches to digital humanities practice that reflect the methodologies and organizing logic of the humanities. It’s a useful reframing for historians in broader discussions of the state of the field and its technological re-imaginings. But the most salient piece, in this extraordinary moment in history, points to what humanistic expressions in data visualization can do in a health crisis. She contrasts Snow’s 1854 map with a reimagined chart that provides individual profiles of each dot.

This new map, designed by media artist Xarene Eskandar, may not lead as clearly to the source of the cholera outbreak, but it does something else important. It impels viewers to consider who the dots represent: actual people with identities and families of their own, community members with social and material roles they can no longer play. Imagine what it would look like to alter the graphic further:  to map the epidemic from the perspective of a grieving relative, or redraw the outbreak entirely in a way that charts fear, confusion, or relief. Turning back to today’s infectious disease crisis, even something as simple as a bar chart indicating words frontline workers have used to describe their varied experiences could provide viewers with important information and perspectives.

This redrawn version of Dr. Snow’s map does what most crisis-related data visualizations do not: it asks viewers to consider the individuality and personhood of each casualty. Source: Digital Humanities Quarterly

Illustrating on-the-ground realities — factoring in emotional and experiential landscapes — in data visualization is a rare practice. But doing so might fortify well-placed empathy and public health efforts, like prioritizing support for more vulnerable populations rather than needlessly panic-buying for oneself or shirking social distancing guidelines. As states lift restrictions on public spaces and the national death toll continues its ascent, this kind of humanistic data reframing seems especially important.