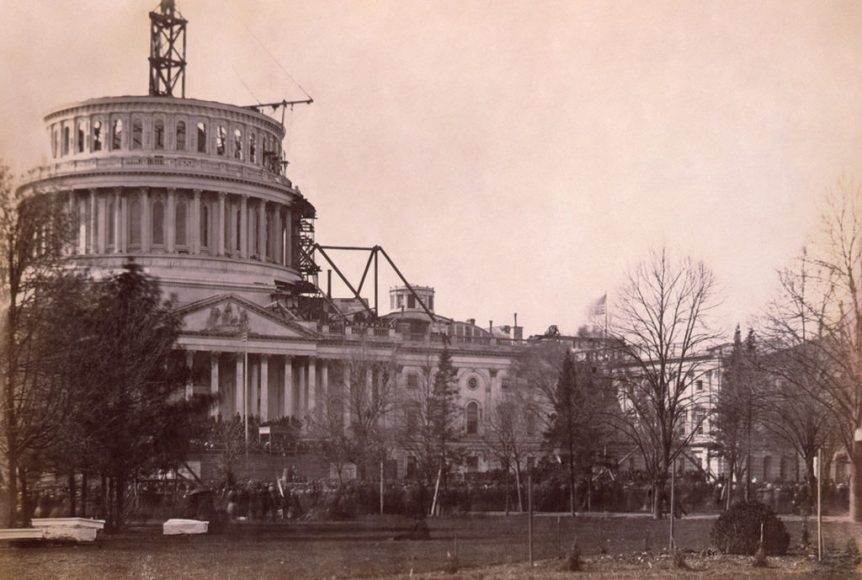 In November 1860, the election of Abraham Lincoln sent shockwaves through the country. The winner of a bitter four-way contest, Lincoln’s platform, which including halting the westward expansion of slavery, was seen as a serious political and economic threat by many enslavers and their allies, who refused to accept the results of the election. Even before the votes were counted, some argued for rebellion. “The Election of Lincoln is Sufficient Cause for Secession,” declared one secessionist, while another thundered “the South will never submit to… the inauguration of Abraham Lincoln.” After Lincoln’s victory, secessionists increased their calls for disunion. Lincoln’s election, one declared, threatened enslavers’ “God given right to own the African.” Another declared,  that the election represented  a “declaration of war upon the institutions, the rights, and the interests of the South,” and still another warned that a Lincoln administration meant “freedom to the slave, but eternal degradation for you and for us.”

The rhetoric worked. By the time of Lincoln’s inauguration on March 4, 1861, seven states had seceded. Militia organized by the seceding states quickly took over federal fortifications and property within their states. Outnumbered and overwhelmed United States forces typically surrendered without resistance. Meanwhile, some Confederate states sent out commissioners to win over other slave states and convince them to leave the Union. 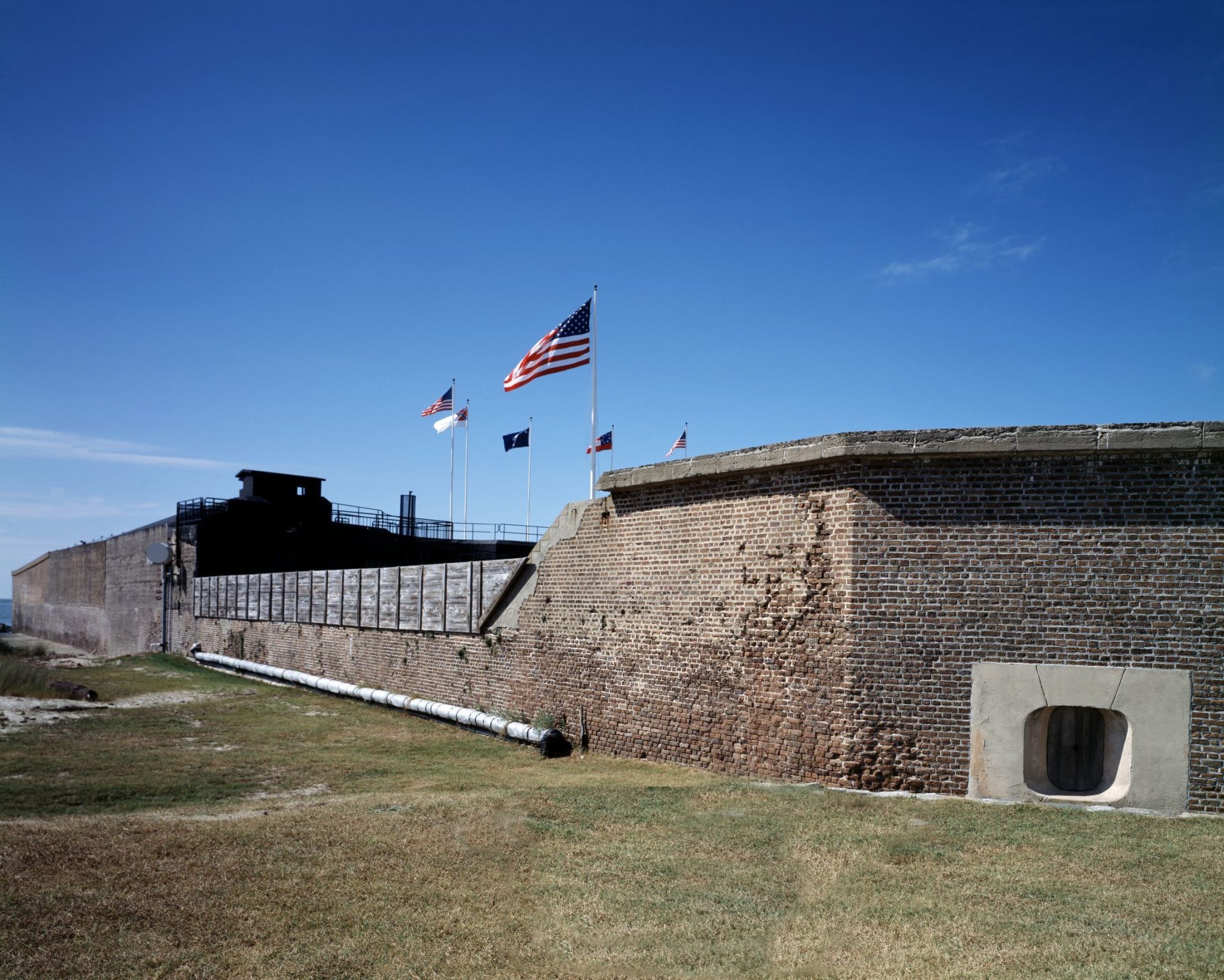 Located in the harbor of Charleston, South Carolina, Fort Sumter remained in US hands even as South Carolina declared itself to be an independent republic. Source: Library of Congress

In Washington, President James Buchanan—who was serving out the final months of his term in office—took a position that satisfied no one and alienated both sides. From his perspective, it was illegal for a state to secede, but he had no powers to stop it. In an attempt to resolve the crisis, Buchanan endorsed several compromises, including a new constitutional convention, but none satisfied the secessionists. However, he refused to abandon Fort Sumter in South Carolina and authorized resupply efforts.

Meanwhile, southern representatives, senators, and cabinet members began to resign, tying their future to the insurrectionary forces in their home states. Some, like Senator Jefferson Davis and Senator Alexander Stephens, had previously spoken in favor of maintaining the union. Shortly before his resignation, Davis had even given a speech arguing that railroads could help unite the divided nation. Still, both men had made clear that their allegiance was conditional to the protection of slavery. After severing ties with the United States, neither looked back. Davis, upon taking office as president of the Confederacy, reflected, “my only wonder is that we consented to live for so long a time in association with such miscreants, and have loved so much a government rotten to the core.” In March 1861, Stephens predicted a long life for the Confederacy, declaring “its corner-stone rests, upon the great truth that the Negro is not equal to the white man; that slavery subordination to the superior race is his natural and normal condition. This, our new government, is the first, in the history of the world, based upon this great physical, philosophical, and moral truth.”

As the nation unraveled, the Confederate states published declarations of secession to explain why they left the union. Mississippi, after declaring, “our position is thoroughly identified with the institution of slavery,” declared that anti-slavery forces had “obtained control of the Government, by the prosecution of its unhallowed schemes.” South Carolina condemned northern states for not cooperating with federal fugitive slave acts, and, in some jurisdictions, giving African American men the right to vote. The new Confederacy, the declarations made clear, would protect slavery and white supremacy.

Despite the political unrest, not all southerners supported secession. James L. Petigru, a South Carolina politician bluntly stated, “South Carolina is too small for a republic and too large for an insane asylum.” Some enslavers, noting their already considerable political power and recent court victories like the Dred Scott decision, doubted the rationale for disunion. Many residents in mountainous areas like western Virginia and eastern Tennessee also opposed secession, viewing it as primarily benefiting wealthy lowland planters. Over three million enslaved people lived in what would become the Confederacy, and secessionists would soon realize their conception of the “faithful slave” was no more than a myth. In the years to come, many, including Robert Smalls, Susie King Taylor, and Spotswood Rice, would use the chaos of the conflict to liberate themselves and fight against their enslavers as soldiers, sailors, spies, and nurses. 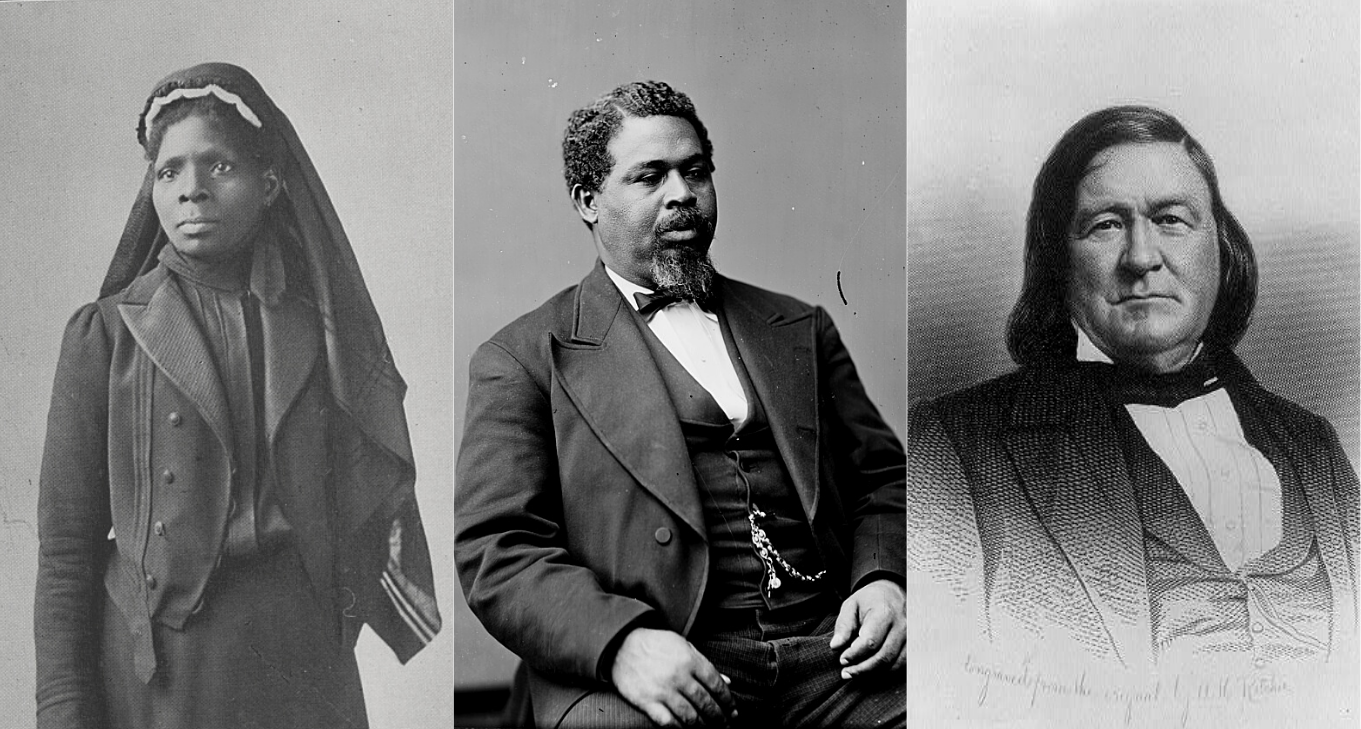 After the Civil War, proponents of the Lost Cause mythology falsely argued that all Southerners had united to fight against the United States. Susie King Taylor, Robert Smalls, and James L. Petigru were among those who denounced secession or actively fought against the Confederacy. Source: Library of Congress

As the Confederacy organized and Buchanan dithered, Lincoln made preparations for his administration and his journey to Washington. He had yet to take office but was already receiving death threats. As he prepared, Lincoln communicated frequently with other Republican politicians. During this time, a variety of compromises to save the Union were floated. Lincoln opposed the Crittenden Compromise, which would have allowed slavery to expand westward, but would later express he had “no objection” to the Corwin Amendment, which would have codified in clear writing that the Federal Government could not interfere with slavery in states where it already existed. This was in keeping with Lincoln’s view that the Constitution did not give the Federal Government power to interfere with slavery in the South, but could block its expansion. As debate and attempts at compromise raged on—and ultimately failed—Lincoln began to assemble his cabinet, appointing former rivals like William Seward, Salmon P. Chase, and Edward Bates to positions of power.

In March 1861, the presidential transition took place. Security concerns had forced Lincoln to travel into the capital under cover of night, prompting criticism and ridicule. The Confederacy had already elected and sworn in Jefferson Davis as its president, and was actively courting other states like Virginia, North Carolina, Missouri, Maryland, and Kentucky to join them. President Buchanan, despite his political disagreements with Lincoln, was looking forward to leaving office. “My dear sir,” he told Lincoln, “if you are as happy in entering the White House as I shall feel on returning to Wheatland, you are a happy man indeed.” Although Buchanan believed history would ultimately vindicate him, many historians consider him to be one of the United States’ worst presidents. 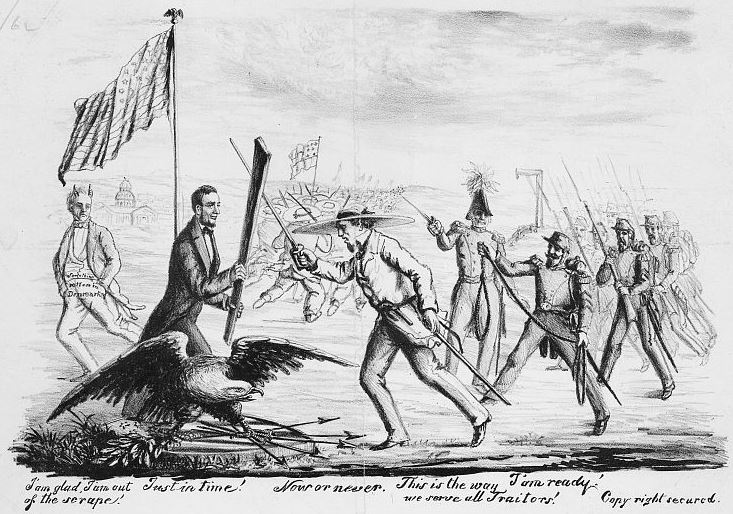 In this cartoon, Buchanan slinks away as Lincoln protects the American eagle from secessionists. To the right, General Winfield Scott and the US army prepare to hang the rebels. Source: Library of Congress 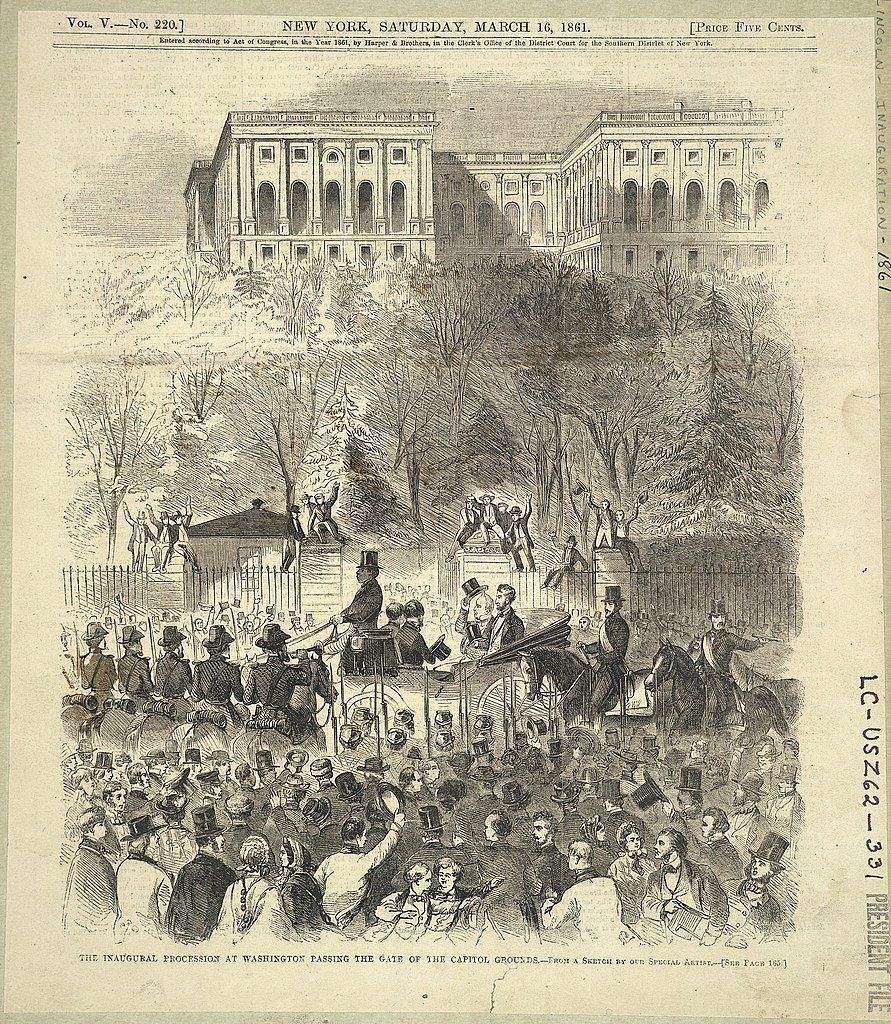 Lincoln and Buchanan travel to the Capitol for Lincoln’s inauguration. Source: Library of Congress

On the day of the inauguration, Buchanan traveled to the Willard Hotel, where the Lincoln family was staying, to meet with the president-elect before traveling to the Capitol together. Soldiers were stationed throughout the parade route for security. Lincoln took his inaugural oath on the east portico of the building, the unfinished dome in the background. Seeing that the president-elect was unsure of where to place his hat, Lincoln’s long-time political rival Stephen Douglas helpfully held it for his former foe. Although he’d lost the election to Lincoln, Douglas denounced secession and steadfastly supported the effort to reunify the country. Supreme Court Chief Justice Roger B. Taney administered the oath. Although Lincoln had criticized Taney’s decision in the Dred Scott case, and the two would clash frequently until Taney’s death in 1864, at that moment both put their grudges aside to fulfill their constitutional roles.

Lincoln, in his inaugural address, made one last plea for unity. “In your hands, my dissatisfied fellow-countrymen, and not in mine, is the momentous issue of civil war,” he informed the secessionists and their allies. However, he implored them, “We are not enemies, but friends. We must not be enemies… The mystic chords of memory, stretching from every battlefield and patriot grave to every living heart and hearthstone all over this broad land, will yet swell the chorus of the Union, when again touched, as surely they will be, by the better angels of our nature.”

The Confederacy gave him their answer a month later. After hearing that Lincoln planned to resupply Fort Sumter, Confederate forces in Charleston Harbor opened fire. In response, the United States called for 75,000 volunteers to crush the insurrection. The country would be politically reunited, four years later, at the cost of over 800,000 dead.

Confrontation with the Past: The Legacy of American Indian Boarding Schools in the United States
Chronicling Health and History: HAI’s Decades-Long Collaboration with the NIH
The Capitol Has Fallen! When the British Burned the Capitol Building
The History and Use of the Defense Production Act