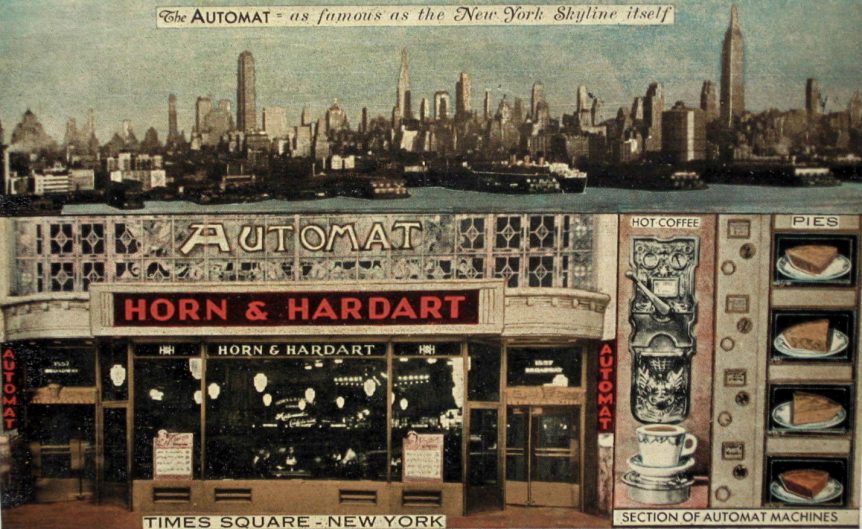 If you haven’t already, learn about the origins of the Automat in Part 1 of this blog.

Despite its mechanical novelty, the Automat was “far from being a glorified slot machine,” as a 1950 newspaper put it. The chrome and glass walls of the Automat witnessed the range of urban social experiences. On the one hand, the Automat could be a place of loneliness and lingering. The lack of waiters meant that the lonely, the homeless, or the unemployed could come in from the heat or cold without being rushed out the door. In one of his famous portraits of the urban American experience, Edward Hopper depicted the automat as a lonely space in his 1927 painting Automat. 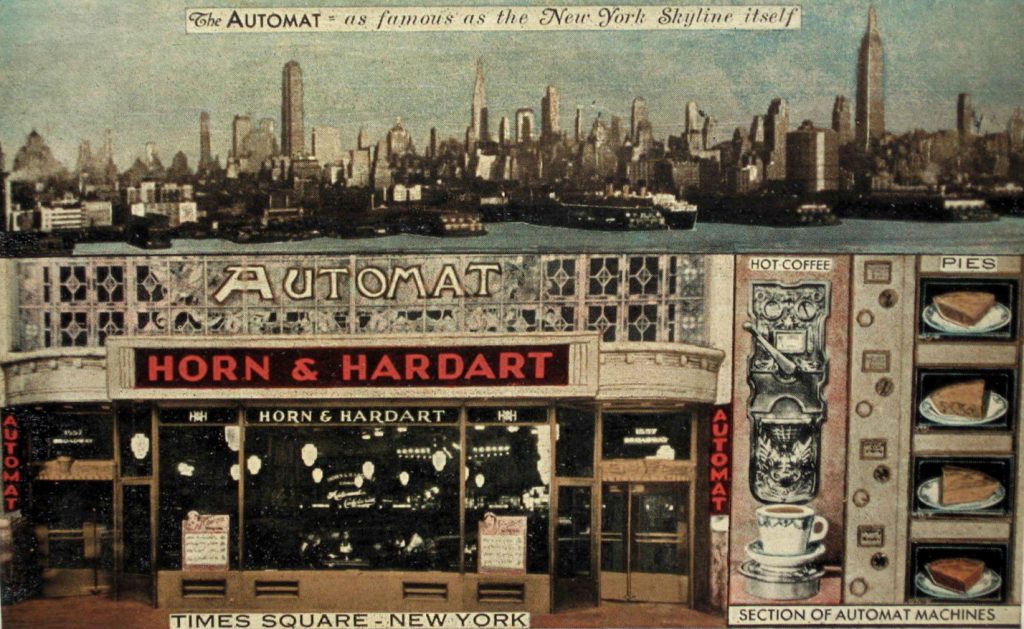 This 1939 postcard calls the Automat “as famous as the New York Skyline itself.” The coffee spouts at H&H Automats, like the one shown here, were in the shape of dolphin heads. Joe Horn originally discovered these ornate spouts in Italy, reportedly modeled after a Roman fountain. Source: Wikimedia Commons

At the same time, the Automat was a place of mixing and mingling, patronized by people from all social classes. In 1905, Mrs. Joseph Widener threw an “automat party” where the standard fare was replaced with pate de foie gras, terrapin, and champagne. In 1960, Jack Benny threw a black-tie party at an Automat. Movie stars like Audrey Hepburn, Jimmy Stewart, Gene Kelly, and Gregory Peck all dined there. But the Automat also did well during the Great Depression, when it offered affordable pot pies, sandwiches, donuts, and a nickel could buy patrons a warm cup of coffee. Some reportedly even consumed “Depression Cocktails” at the Automat, which consisted of free ketchup mixed into a glass of water.

For many, an H&H was a place of autonomy, where one could hurry, or linger, without being held up or bothered. Children could pick out their own foods and work the machines themselves. The Automat was a place where you could eat pie for breakfast if you wanted to, and in 1964, Horn and Hardart sold an average of 822 pieces of pie across their New York locations each day between the hours of 8 and 11 am.

As a result, Horn and Hardart’s became the largest restaurant chain in the United States, serving hundreds of thousands of people a day at its peak. 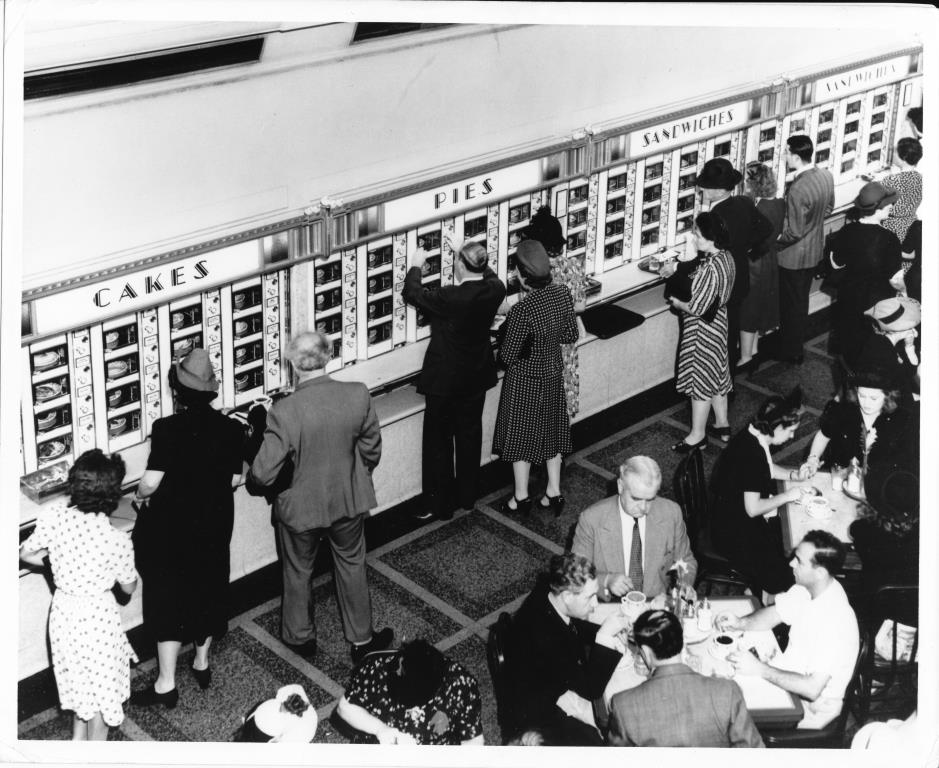 A busy automat at the lunch rush. Early on, hot dishes at the automat would be prepared on the spot. When patrons inserted a nickel in the slot, they would receive a metal token, and a worker in a kitchen on the floor below would prepare their food. Once the food was finished, the kitchen would send the prepared food up, it would be placed in the correct compartment, and the diner could insert the token to retrieve their food. Later, heated and cooled compartments kept food at the correct temperature. Source: The National Archives

The Automat in Decline

Despite its status as an institution in New York and Philadelphia, in the 1950s, the Automat began its slow decline. City centers atrophied as many moved to the suburbs, and inflation finally pushed the price of H&H coffee to 2 nickels in 1950, after decades of reliable, 5-cent coffee. As fast-food restaurants gained popularity, Automats had trouble keeping up.

Despite the mechanical façade of these waiterless restaurants, in reality, the Automat relied on an army of workers to cook and stock food. All the Horn and Hardart Automats were supplied by central commissaries where exacting standards for quality and consistency directed the production of hundreds of different dishes. At Automat locations, workers behind the scenes refilled empty glass compartments with baked beans, cakes, and ham sandwiches, and constantly monitored the food and drinks to ensure they were fresh. When the volume of customers at H&H Automats declined, these busy behind-the-scenes workers became too expensive for the restaurants to support. Automats cut quality to cut costs, and rather than preparing dishes fresh, H&H Automats began to rely on frozen food. Patrons noticed the decline in quality.

On December 28, 1968, the original Horn and Hardart Automat on Chestnut Street closed after 66 years. By that time, the automat machines at that location had not been in operation for a year but were left as décor in the Horn and Hardart cafeteria. Many Automat locations were replaced with fast-food restaurants like Burger King. By 1977, the last New York City Automat had become a tourist attraction and novel piece of nostalgia. When quietly shuttered in 1991, the Automat vanished from the American dining scene.

Since the last H&H Automat closed, several other attempts at an automat-type restaurant have failed to catch on. None have successfully replicated the human experience that made the Automat an institution.