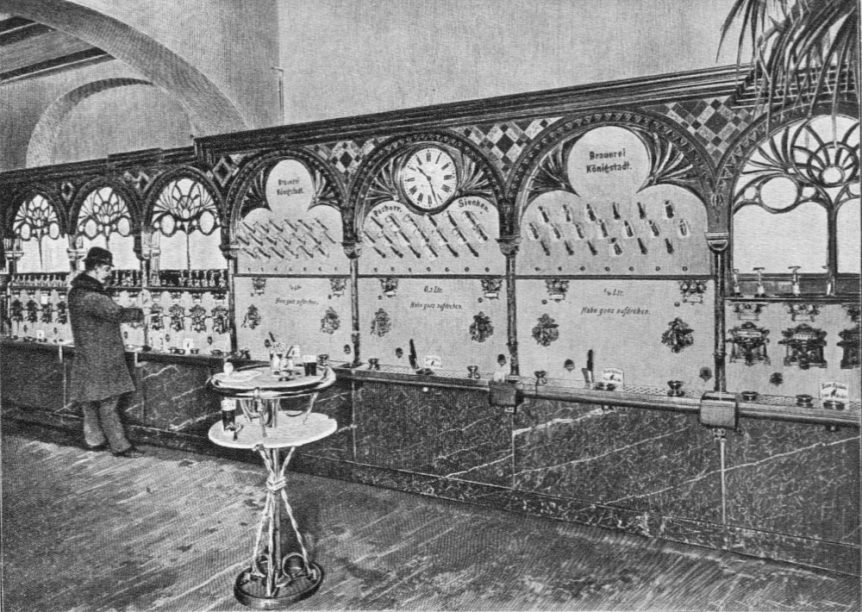 As the country begins to reopen and establish a “new normal,” the question of what the restaurant experience will look like in the coming months looms large. Today, we’re exploring the history of a long-forgotten, low-contact dining option: the Automat.

Once the largest restaurant chain in the United States, Automats were a sort of intermediate between a cafeteria and a vending machine. The walls of the Automat were lined with individual, glass-fronted compartments containing a plate of food. A 1902 newspaper described it this way: “Anything from a sandwich to an oyster stew may be obtained by dropping the necessary coin in a slot…the food will be displayed in long glass compartments. You see what you want, and by dropping a coin into the aperture beside the desired dish and pulling a lever the mechanism starts to work and lets down a sandwich, a piece of pie, or whatever the order may call for.” The Automat also offered coin-operated spouts for drinks like coffee and chocolate milk, and open, cafeteria-style seating. 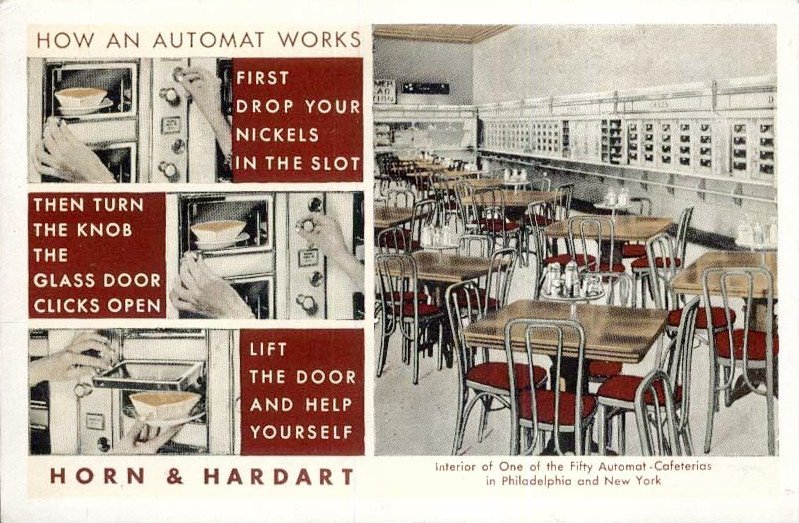 This card demonstrates how an Automat works. Automats had no waiters, and many patrons enjoyed the speed of self-service food, and the fact that no tipping was necessary. Although the food was paid for entirely in nickels, this did not mean Automats were safe from theft. In 1918, a robber stole a safe from a Horn and Hardart Automat containing 12,000 nickels, totaling $600. In 1944, a newspaper reported that $17,000 worth of silverware had been stolen from their restaurants in a month. A New York man named Arnold Kline was responsible for some of the losses, having stolen a total of 23 teaspoons from an Automat on Broadway. Source: Wikimedia Commons

At its height, the Automat was featured in popular movies and songs and became a must-see New York City icon for tourists. Today, none of these restaurants exist in the United States. Although Automats originated as a high-tech, impersonal form of food service, they became best known for the thoroughly human experience of eating in these restaurants alongside people from all walks of life.

The Origins of the Automat

Late in the 19th century, a Philadelphia man named Joe Horn took out a newspaper ad indicating he was seeking a business partner. Frank Hardart, a Philadelphian with Bavarian roots, responded and the two opened a luncheonette in 1888. Quick lunch spots like this catered to the growing class of urban workers with short lunch breaks. Horn and Hardart opened a chain of restaurants that became known in Philadelphia for their fresh drip coffee—a welcome departure from the harsh, boiled coffee standard at the time. By the turn of the 20th century, Horn and Hardart were ready to take the quick lunch concept further.

Automatic restaurants first sprung up in several cities across Europe in the final years of the 19th century following the concept’s 1895 debut in Berlin at a restaurant named Quisisana. A sales representative for Quisisana’s machinery approached Horn and Hardart about using their Automat machines, and Hardart visited Quisisana during a 1901 vacation to Germany. After seeing the technology in action, the American entrepreneurs arranged to have these German Automat machines shipped to America for a new Horn and Hardart restaurant. 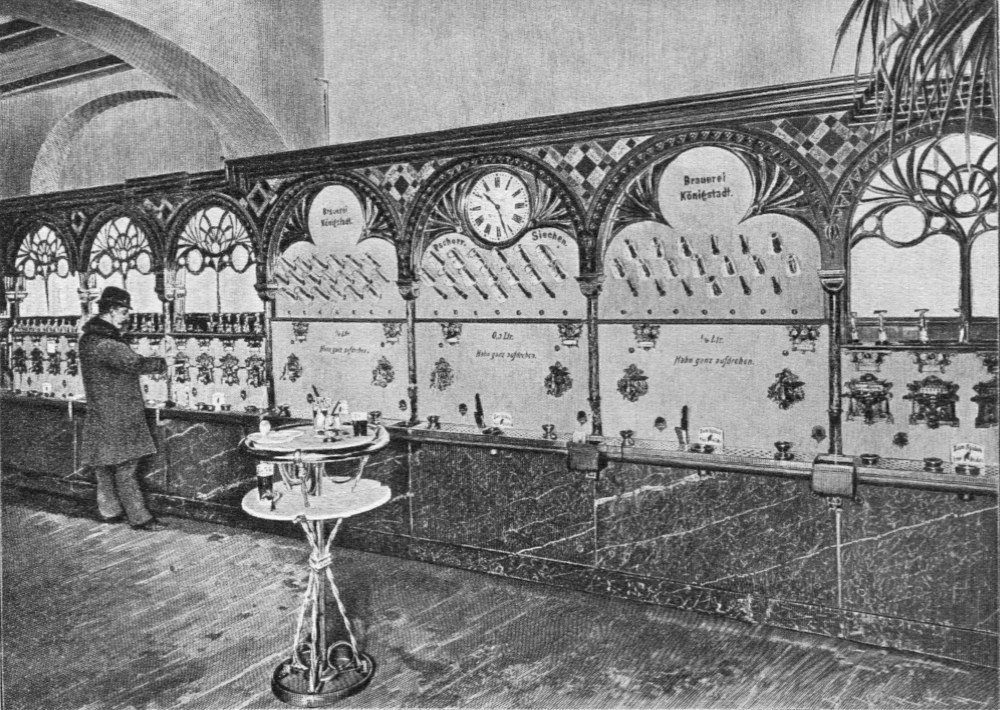 This 1896 illustration shows the beverage spouts at a Berlin Automat. Unlike the Horn and Hardart Automats in the United States, the German Automats served alcohol. Quisisana was lavishly decorated in Art Nouveau style, another quality that Horn and Hardart borrowed. Eventually the elaborate, marble and botanical decorative elements gave way to a simpler, Art Deco look. Source: Wikimedia Commons

Getting the machines to the United States involved some trial and error. The first shipment sank to the bottom of the sea off the coast of England in a shipping mishap. The second set made it safely to the U.S. but was damaged in an explosion at the building where they were stored. Finally, after some tinkering to repair the machines, Horn and Hardart opened the first American Automat at 818 Chestnut Street on June 9, 1902. The novel restaurant instantly garnered attention. Eager customers flooded the restaurant on opening day. 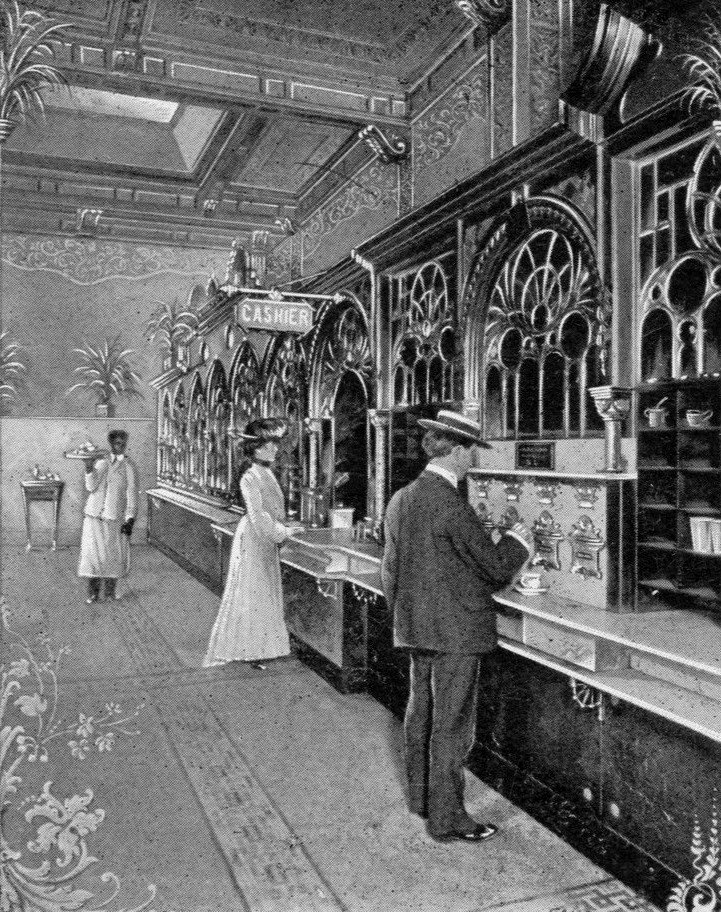 Despite its European roots, the Automat soon became an integral part of the American dining landscape. As early as 1902, a newspaper article introduced it as follows: “The Automat is the invention of Herr Sielaff, a captain in the Kaiser’s own regiment, who evolved this most ingenious and practical arrangement, something that out-Yankess [sic] the most Yankee notion ever conceived and executed in the United States.”

New York City’s first Automat, operated by the Harcombe Restaurant Co., opened soon after the Philadelphia location at 830 Broadway. Here, diners could enjoy upscale fare—like lobster a la Newburgh and cocktails in high balls—as well as everyday favorites like ice cream and chicken soup. It enjoyed only brief success, going out of business in 1907. It wasn’t until Horn and Hardart opened a location in Times Square in 1912 that the Automat began to take off in the Big Apple.

As Horn and Hardart Automats (H&Hs, as they were sometimes called) added new locations, their appeal was not limited to workers on lunch breaks. H&H Automats were one of a few restaurant chains in the late 19th and early 20th centuries where unescorted women were allowed to dine. Automats were suitable for children, affordable, but never seedy.

Other attractions included the hygiene and technological innovation of the Automat. The waiterless restaurants allowed patrons to glimpse their macaroni and cheese, mashed potatoes, and cheesecake before purchase and gave the impression that the food was untouched and unsullied by human hands. In a time when many American kitchens lacked modern refrigerators and electric appliances, the Automat offered cool, mechanical efficiency in the spirit of the Ford assembly line.

These clean, inexpensive restaurants became so deeply entrenched in the New York City lifestyle that they came to represent not only American efficiency but the character of New York City itself. In 1924, a newspaper columnist described the Automat this way: “The automat is almost as much of an institution along Broadway as Times sq. No revue or variety show is complete without its quip about this famous nickel-in-the-slot eating place… It swirls with the froth of Broadway life—the peripatetic ads of the one-flight tailors, the rah, rah boys, the chorus girls, scrapping newsboys, leading men, visiting school teachers, gamblers, ladies of the evening and hard-boiled gents… It is one of the melting pots of Broadway where all castes rub elbows and carry their food to marble-topped tables.”

Check back next week for Part 2 of our look back at the Automat.