Archives have long been a part of society’s infrastructure as they contain vital documents, objects, and information about various operations of organizations or even society as a whole. It is no surprise, then, that archives have found their way into various forms of media, from books to movies and television shows. While these depictions often serve as supporting rather than central plot points, they nonetheless can be used to demonstrate what does and what does not go on within an archive.

Archives feature in several scenes of one of my all-time favorite film series—the Star Wars saga. In the prequel films, we see Obi-Wan Kenobi visiting the Jedi Temple archives (based on Trinity College Library in Dublin) to look for a planet called Kamino in their records. His attempts to find the planet within the archives are unsuccessful and the archivist/librarian consulting with him tells him that if the planet is not in the records, it simply does not exist. Obi-Wan then decides to consult with Jedi Master Yoda, who at the time was training a group of younglings. One of the younglings points out that the information may have been deleted by someone who did not want others to know the location of Kamino.

The Jedi Temple archives as depicted in Star Wars II: The Attack of the Clones (2002). Source: Wookieepedia 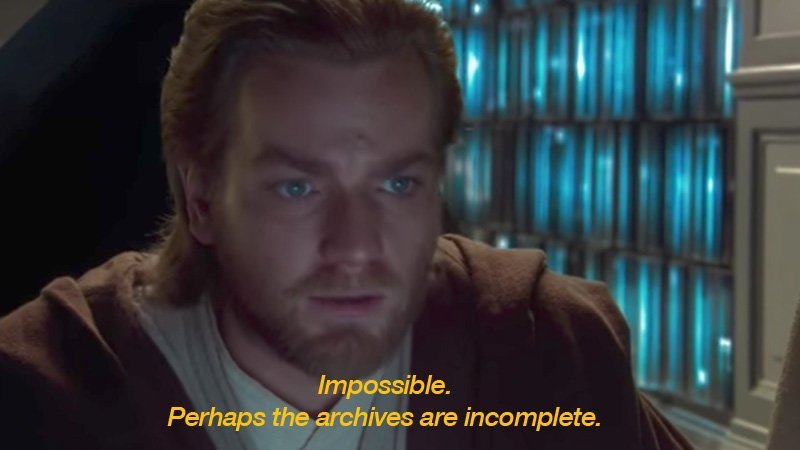 This still from the scene when Obi-Wan Kenobi cannot find the planet Kamino has since become a meme. Source: KnowYourMeme

This scene has some serious implications, as the Jedi Temple purports to be all-knowing but does not account for any mistakes made or deletions. This does not reflect the realities of modern archives, which have policies that prevent the destruction or deletion of important data and are likely to disclose changes to their collections. Archivists openly share the extent and limitations of their collections with their patrons and, depending on their collections policy, will welcome new records and data with open arms. In recent years, many archives and their parent organizations have come forward to have an open discussion about their organizations’ tumultuous past and are often more willing than the Jedi Temple archives to relay wrongdoings of the past. For example, the organization swisspeace has co-organized conferences and events to help nations and archives preserve and discuss atrocities committed throughout history. Meanwhile, the University of Glasgow recently announced plans to pay reparations to descendants of enslaved people who played a role in the university’s history. In collaboration with Caribbean universities, the Scottish institution has also developed an exhibition and webpage dedicated to slavery studies, which includes documentation and objects from the university’s archives.

Cassian Andor (right) and Jyn Erso (left) as they search for the Death Star plans in Rogue One: A Star Wars Story (2016). Source: getCodeLove

Continuing through the Star Wars film franchise, we come to Rogue One: A Star Wars Story. The stand-alone film comes after the prequels in Star Wars chronology, but before the original films, with the final scene directly bridging into A New Hope. This movie differs from most of the Star Wars films in that it does not follow the main Skywalker story, but details exactly how the Death Star plans made their way from the Empire’s hands into the possession of the Rebel Alliance. The climax of the film follows protagonists Jyn Erso and Cassian Andor as they search for the Death Star plans within the Empire’s archives on the planet Scarif. This planet houses all of the Empire’s data and, with the help of their crew, the heroes are able to infiltrate the archives, find the Death Star schematics, and send the plans to another Rebel ship.

While the Rebels emerge victorious, the effort to obtain the records involved a distraction that cost numerous lives for both the Rebels and Empire. In the end, Grand Moff Tarkin blows up the building where the archives are held. Historically speaking, it is not unheard of for government or military operatives to destroy documentation of their actions, to the detriment of historians, archivists, journalists, and the broader public, all of whom have a vested interest in the content and preservation of such records. In the last days of World War II, for instance, Nazi officers at Auschwitz burned documents to try and hide their heinous crimes as the Allied forces closed in. In reality, however, the infiltration and destruction of an entire archive as depicted in Rogue One is highly unlikely. Most archives maintain policies of limited access and a retrieval system that requires patrons to go through an archivist to obtain records. 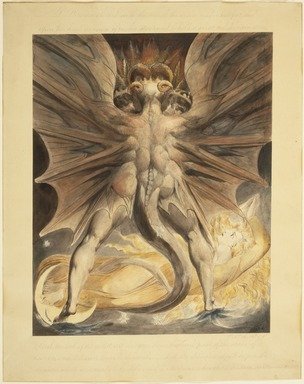 A more realistic depiction of an archive under threat—in this case, not by war but by an individual—is that of the Brooklyn Museum’s Library and Archives as depicted in Red Dragon and the television series Hannibal. In both of these works, the villainous Francis Dolarhyde is enamored with the painting The Great Red Dragon and the Woman Clothed in Sun to such an extent that he believes the work of art has told him to murder families. He travels to the Brooklyn Museum to view the piece in person, claiming to be a researcher. When a staff member retrieves the painting, Dolarhyde knocks her unconscious and then consumes the art. It is just after this moment that the protagonist, Will Graham, comes upon the unconscious archivist/curator and attempts (unsuccessfully) to pursue Dolarhyde.

While the violence and destruction depicted in this scene are by no means typical, it does offer a realistic perspective on what it is like to request something from an archive. In the movie and television show, it is clear that the museum is only open to researchers at certain times and by appointment only. This is true of the Brooklyn Museum and is often the case for other archives and museums. Both the movie and the show also depict a staff member escorting Dolarhyde to a viewing room, where he will access the artwork under supervision. The painting is stored in its own container and kept in a plastic protector. This may be the case for some higher profile collections, many repositories store multiple items in the same container, separated by folders and stored in either a plastic or paper protector depending on the material. Overall, this scene scores high marks for accuracy—except for the fact that it shows the archival collection on shelves in the viewing room. In reality, artwork and other archival collections are kept in a separate storage space accessible only to archives staff.

An archive also features prominently in RED: Retired and Extremely Dangerous. In the film, Bruce Willis and a slew of other high profile actors star as retired CIA agents being targeted by younger CIA agents due to their involvement in a mission years ago. In order to find out why exactly they are being targeted, the team infiltrates the CIA archives at CIA headquarters. There, older records about retired agents and classified missions are held in what looks like an old-style bank vault (which is actually located at a hotel in Toronto). An elderly archivist leads Bruce Willis’ character, Frank Moses, into the vault, noting that he respects Moses and found the younger CIA agent unbearable. Essentially, the archivist let Moses in even though he most likely did not have clearance to do so. The scene offers a depiction of an archive that looks and functions the way some viewers would expect, from the dramatic vault to the old-fashioned filing system. In reality, however, it is unlikely that documents would be stored in a vault, and while some archives do store their records in filing cabinets, a fair amount of organizations cycle their documents out of a filing system after some time has passed. It would be more likely that archivists have since processed the records out, storing them on shelves in record center cartons. Thus, while it is interesting to see the stereotypical archive come to life, the stereotype does not always hit the mark.

Returning back to a series of films, The Mummy franchise debuted in 1999 starring Brendan Fraser until it was rebooted in 2017 with Tom Cruise at the helm. The first movie takes place in 1926 in Cairo, Egypt with a female librarian and aspiring Egyptologist named Evelyn (Evie) as a main character. While the film casts Evie as a librarian, her role and responsibilities closely reflect those of an archivist. She works at the Museum of Antiquities under Dr. Terrance Bey, the museum curator. In one scene, Evie is seen shelving books when she knocks over all of the shelving units. Shortly after this scene, we see her investigating an odd noise, which turns out to be her brother, hiding in a sarcophagus with a mummy, waiting to scare her. This scene, while meant to be comedic, depicts what museums, libraries, and archives may have been like in the 1920s before most repositories implemented rigorous collections and display policies and security protocols. Today you would almost never be able to find a museum where one could feasibly get into a sarcophagus like Evie’s brother did. And as for the bookcase domino effect, most shelving units now are bolted down or have some weight to prevent anything like that from occurring, but there is a slight chance it could happen in an outdated facility or in the event of a natural disaster.

Evelyn Carnahan (Rachel Weisz) prior to her mishap in The Mummy (1999). Source: Flippedscreen 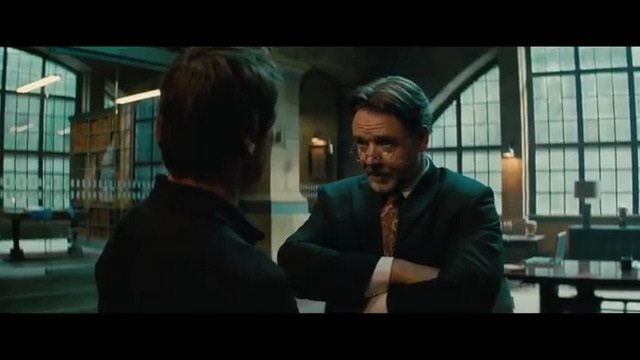 Dr. Jekyll/Mr. Hyde’s warehouse in London where he keeps his collection in The Mummy (2017). Source: Scoop

The rebooted Mummy movie with Tom Cruise introduces a Dr. Jekyll and Mr. Hyde character portrayed by Russell Crowe. This character brings the recently awakened mummy along with Cruise’s character to a warehouse in London that houses various supernatural oddities. It is, in essence, Jekyll/Hyde’s private collection. At one point, the scene alludes to the previous movies when Cruise’s character utilizes the Book of the Dead from the 1999 movie to defend himself from Mr. Hyde. Like RED, the scene offers a stereotypical and inaccurate depiction of an archive or collection. This time, the main inaccuracy is that the documents are stored on shelves surrounded by glass walls and large windows. This is not the case in modern archives, as natural light and fluctuating temperatures from windows can damage or destroy documents and artifacts. A broken or poorly sealed window could expose the collections to the elements, insects, or vermin. In a final affront to archivists everywhere, Cruise’s character uses an object from the collection for self-defense, which would definitely be against any collection policy.

In conclusion, there is never a dull day when working in an archive, but movies and television shows tend to exaggerate the goings-on of an archive. Therefore, most depictions of archives in film and television shows should be taken with a grain of salt—but also an ounce of joy for these zany, outlandish representations of repositories and what happens within them. They are wonderful places to work and visit, but don’t expect any danger and intrigue on your next research trip (unless what you’re looking at is rather exciting!)