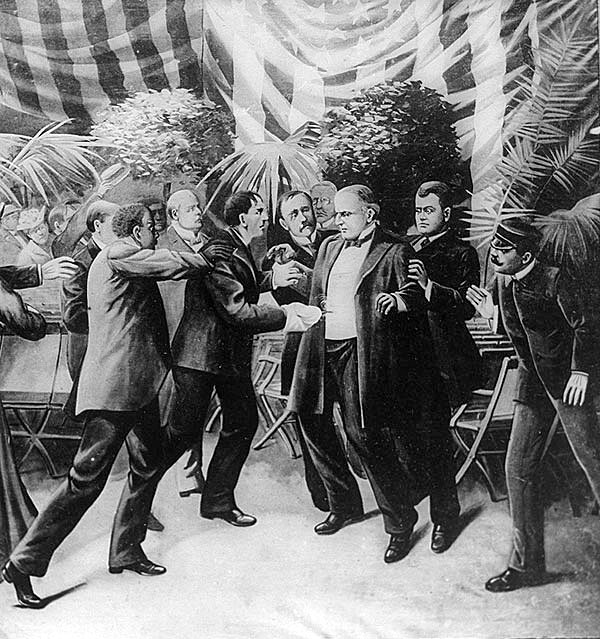 This wash drawing depicts a deranged-looking Czolgosz shooting a helpless William McKinley in the Temple of Music at the Pan-American Exposition. Source: Library of Congress

On September 6, 1901, Leon Czolgosz—an unemployed factory worker, American-born son of Polish immigrants, and self-proclaimed anarchist—walked up to President William McKinley at the Pan-American Exposition in Buffalo, New York, and shot him. Czolgosz believed that McKinley, a friend of the American business class, was the cause of his problems and the enemy of the American people. When McKinley died on September 14 from a gangrene infection that set in around the bullet wounds, Czolgosz became the most notorious man in America.

On October 28, Warden J. Warren Mead of Auburn State Prison received a death warrant from Justice Truman C. White of the New York Supreme Court: “Now, therefore, you are hereby ordered, commanded and required to execute said sentence upon said Leon F. Czolgosz . . . causing to pass through the body of him, said Leon F. Czolgosz, a current of electricity of sufficient intensity to cause death . . .” The following day, Czolgosz was roused from a sound sleep and brought to the execution chamber where the instrument of his death, the electric chair, sat. By 7:14 that morning Auburn Prison’s guards carried out the warrant’s charge, killing Czolgosz with three rounds of electricity. Czolgosz’s body was examined, placed in a coffin filled with sulfuric acid, and buried in the prison’s graveyard without ceremony. All of his personal effects were incinerated. Given that the sulfuric acid was expected to dissolve his body within 12 hours, any physical evidence of Leon Czolgosz’s existence would be erased by the next day—a mere forty-seven days after the death of the man he murdered. The wheels of justice turned quickly for the convicted assassin of President William McKinley. 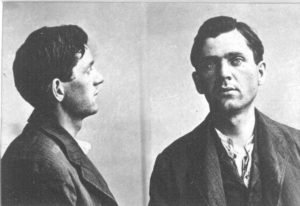 Although Leon Czolgosz was physically gone, neither he nor his act of political violence disappeared from the minds of the American public. The affair captivated the popular press, which extolled the virtues of the martyred president and maligned the wickedness of the 28-year-old assassin. Terrified that Czolgosz represented the spearhead of political radicalism in the United States, politicians investigated ways to stamp out what they perceived to be anti-American ideologies. Doctors and social scientists considered what could have motivated Czolgosz, a member of the poor laboring class, to carry out such a desperate act. And the Edison Manufacturing Company immortalized Czolgosz’s execution through the new medium of moving pictures.

Czolgosz’s professed anarchism became the ideological boogey-man of early-20th-century America. Although the United States had experienced spasms of anarchist-induced violence in decades prior, particularly the Haymarket bombing in 1886 and the attempted assassination of industrialist Henry Clay Frick in 1892, nothing inspired such a wide range of political action like McKinley’s assassination. 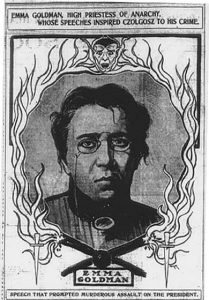 Initial efforts to repress anarchism in the United States focused on Emma Goldman, a naturalized Russian immigrant and notorious anarchist. During questioning, Leon Czolgosz explained how Goldman’s speeches had “set me on fire” and revealed that he met her months before he assassinated McKinley. Law enforcement raced to find and arrest her on a charge of conspiracy to commit murder, but there was no proof that she had anything to do with Czolgosz’s plot to kill McKinley. Without evidence to support the charge, Goldman was set free. If the law could not hold Goldman, then perhaps new laws would need to be passed in order to curb her activities and prevent her followers from becoming future assassins.

The newly-ascended President Theodore Roosevelt delivered his first address to Congress on December 6, 1901. After eulogizing his predecessor, he launched into a condemnation of anarchism. He declared that the anarchist “is malefactor and nothing else.” Roosevelt asserted that an anarchist was no more than a criminal “whose perverted instincts lead him to prefer confusion and chaos to the most beneficent form of social order.” He urged Congress to take immediate action, including the exclusion and deportation of anarchists from the United States through new immigration laws. It was lost on no one that Czolgosz was the son of foreign-born parents with, as the New York Times put it, a “foreign-sounding” name. Roosevelt, like many others, saw radicalism as primarily a foreign threat; he believed that because the United States was the freest country in the world, it wasn’t possible for anyone to be a home-grown anarchist without foreign influence.

Congress took up the cause of trying to get rid of anarchism by getting rid of the immigrants who brought it. Some members of Congress vehemently believed that anarchists already living in the United States, regardless of their citizenship status, should be banished to some Pacific island. In 1903, over the protests of free-speech advocates, Congress passed the Alien Immigration Act, which barred anarchists or those who believed in the overthrow of the government from entry into the United States. Furthermore, it prevented their naturalization and exposed recent immigrants to deportation if they were discovered to be anarchists within three years of their arrival. In 1918, Congress passed the Anarchist Exclusion Act, which vastly expanded the definition of “anarchism” and made all immigrants vulnerable to denaturalization and deportation, regardless of how long they lived in the country. Emma Goldman was among those who lost their citizenship and were deported under the Anarchist Exclusion Act.

While it was easy for many to blame a foreign ideology for encouraging Czolgosz’s act, his connection to anarchism was, in fact, tenuous. Others pointed to a much less convenient and understood reason: insanity. While Czolgosz was forthright in confessing that McKinley’s murder was politically-motivated, his court-appointed lawyers explained the crime as a matter of insanity. The jury ultimately rejected this defense, but questions about the soundness of Czolgosz’s mind persisted.

Soon after Czolgosz’s execution, Drs. Carlos F. MacDonald and Edward A. Spitzka carried out an autopsy of his body, but they had a special interest in his brain. What the physicians found, according to MacDonald, was that “the organ [brain] and all its appendages appeared to be absolutely healthy and free from any abnormality whatever, thus corroborating the opinion . . . that he was perfectly sane.” 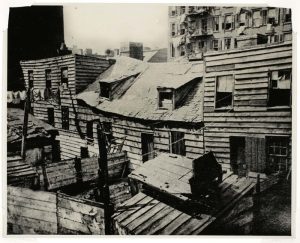 Around the same time that Channing and Briggs were making the connection between Czolgosz’s living conditions and crime, social reformers like Jacob Riis were also advocating for better living and working conditions for the country’s poor. This picture, “Dens of Death,” comes from Riis’s expose How the Other Half Lives. Source: Library of Congress

However, a second group of doctors challenged the findings of MacDonald and Spitzka. Drs. Walter Channing and Lloyd Vernon Briggs, both psychologists—or alienists, as they were known at the time—contended that MacDonald and Spitzka only considered the results of a physical examination and didn’t consider any psychological factors. This issue wasn’t uncommon for medicine in the early 20th century. Psychology and psychiatry hadn’t yet undergone the same level of professionalization and legitimization that physical medicine had to this point, and while courts admitted the expert testimony of physicians, they rarely considered the testimony of alienists.  But Channing and Briggs believed that there was strong evidence that the environmental and emotional effects of living a working-class life in America could lead to despair, and ultimately, murder.

After analyzing interviews and observations of Leon Czolgosz’s family and acquaintances, Channing and Briggs came to the conclusion that insanity was the most likely explanation for Czolgosz’s crime. Channing wrote that Czologosz’s chronic sicknesses, the result of unhealthy living conditions in Cleveland, caused him to become delusional. This delusion led Czolgosz to believe that it was his duty to kill the president for the good of the “common and working people.” Channing and Briggs echoed a host of other social reformers who were concerned by the living and working conditions of the working class. Whereas many painted Czolgosz as a rational actor who freely adopted a dangerous and alien ideology, Channing and Briggs ultimately blamed the social conditioning of low wages, dangerous workplaces, and little social mobility for America’s working poor. Their argument was not just psychological; it was also sociological. In other words, anarchists were not just imported into America, but rather they were also raised in America.

While doctors and politicians were debating insanity, social conditioning, and political violence, others were drawn to the execution of Czolgosz itself. Coming of age at roughly the same time, the electric chair and cinema were exemplars of technological modernity in the Progressive Era. Thomas Edison happened to be an instrumental figure in the development of both. Edison’s laboratory invented kinescope technology and, as a means of undercutting his primary rival in pioneering consumer electricity, George Westinghouse, lobbied the New York State Supreme Court to adopt alternating-current electrocution as a form of execution. 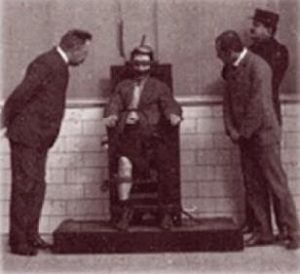 A still taken from Execution of Czolgosz, with Panorama of Auburn Prison shows the characters of the warden and physicians inspecting the dead Czolgosz. Source: Library of Congress

Leading up to Czolgosz’s execution, Auburn Prison was inundated with requests to witness the execution. To capitalize on the public interest, the Edison Manufacturing Company filmed a staged reenactment of the execution with a panorama of Auburn Prison filmed on the day of the actual execution. Shown in storefront nickelodeons—an early name for movie theaters—the Edison Manufacturing Company promoted Execution of Czolgosz, with Panorama of Auburn Prison as being “faithfully carried out from the description of an eye witness.” The film shows the character of Czolgosz led out of his cell, strapped into the electric chair, and ultimately killed with three courses of electricity. While this portrayal of the execution was sanitized compared to actual use of the electric chair, Execution of Czolgosz—and American bloodlust—temporarily resurrected the bygone spectacle of the public execution.

Although Leon Czolgosz was neither the first nor the last presidential assassin, and he is hardly the most well-known, his singular action resonated outward to captivate the American public. Americans had to consider the implications of immigration restriction, a lack of government support for the laboring class, and the death of a criminal for public revenge. It would not be the last time that the United States would grapple with these issues.