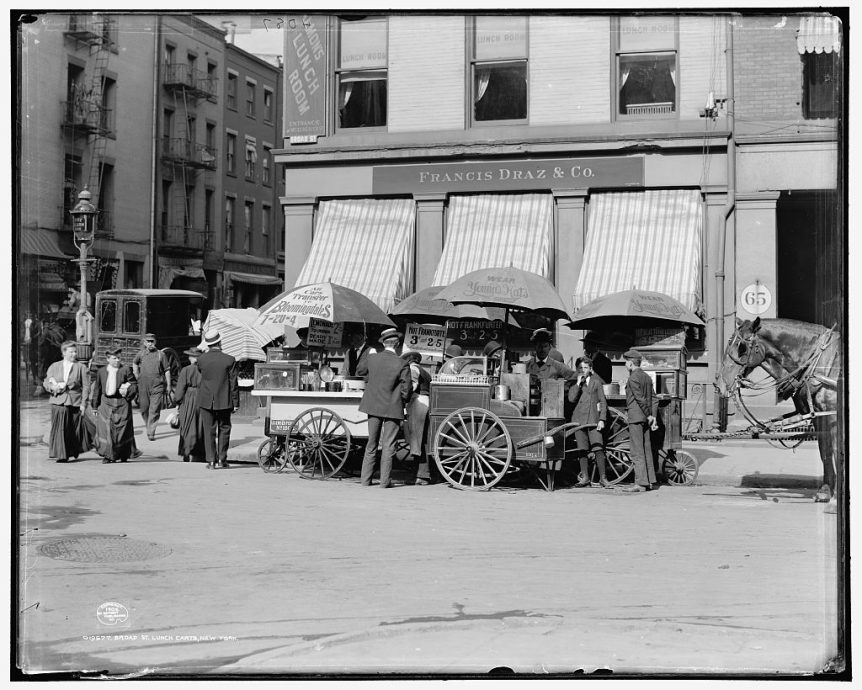 Over the past weeks, takeout has been the only way most Americans can enjoy restaurant food and support businesses hit hard by shutdowns. But even before the coronavirus outbreak, food delivery apps were growing rapidly as Americans began enjoying food from all kinds of restaurants at their couches and kitchen tables.

Our relationship with takeout food goes back nearly 100 years. The history of takeout is part of a larger story about business innovation as Americans traveled more, and a growing cultural emphasis on leisure and convenience. It also intersects with segregation and discrimination. Takeout food was often a point of connection between marginalized communities and the society that marginalized them. Often, the restaurant industry was one of the few employment opportunities for members of these communities.

Travel, Leisure, and Food Away From Home

In the 18th and 19th centuries, inns, taverns, and boarding houses offered food for travelers. There is evidence that communities around these establishments also benefitted from tavern kitchens, and sent servants to fetch prepared foods for residents to eat at home. 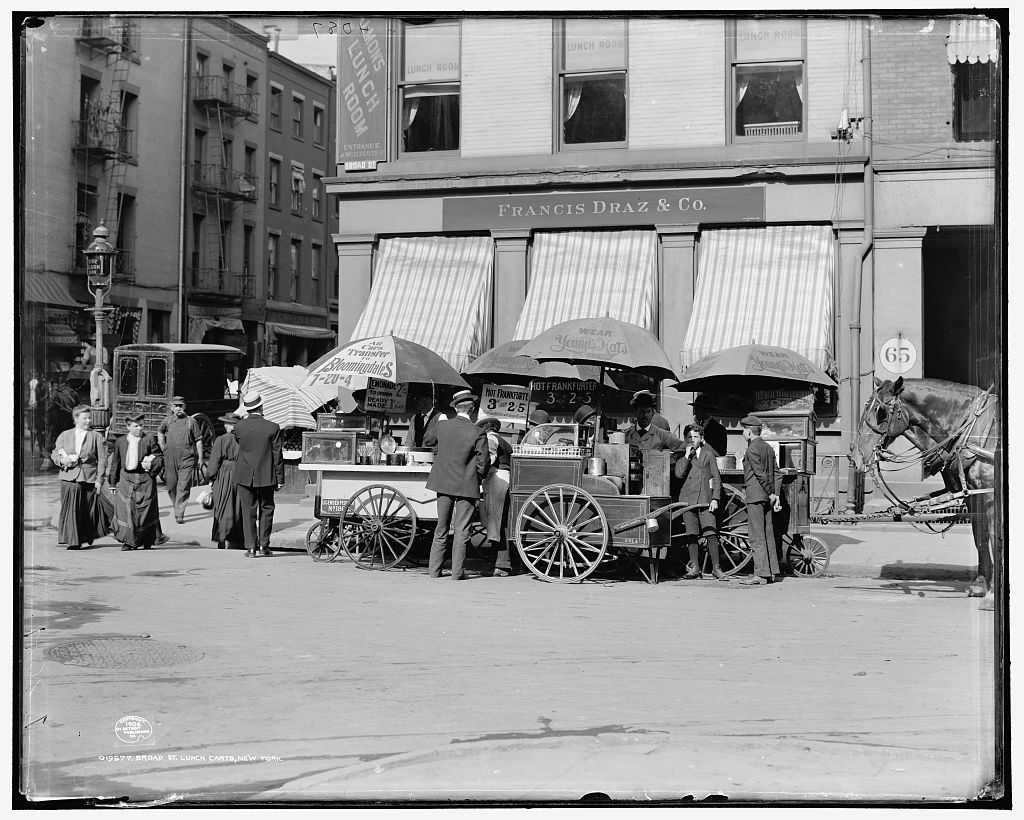 Lunch carts selling frankfurters sit below a second-story lunch room on Broad Street in New York City in 1906. These businesses catered to a growing class of urbanites who worked too far from home to prepare a meal in their own kitchens during the lunch hour. Source: Library of Congress

Street vendors sold meals to travelers or laborers in the late 19th century in train stations and on busy city streets. Oysters sold in pails were popular quick meals for laborers on the coasts. In California, vendors from Mexican communities sold tamales. In cities like Savannah, Georgia, slaves or former slaves owned and operated food carts, lunch wagons, or inn dining rooms. For decades, these affordable, quick food options represented work opportunities and savvy business options for members of marginalized communities, even in the face of scarce resources and prejudice.

In the late 19th and early 20th centuries, these vendors, along with luncheonettes and soda counters, sold quick meals to the increasing number of urban workers who didn’t have time to go home on their lunch breaks. As Americans began to travel more often, places like train stations or tourist spots offered quick meal options as well. 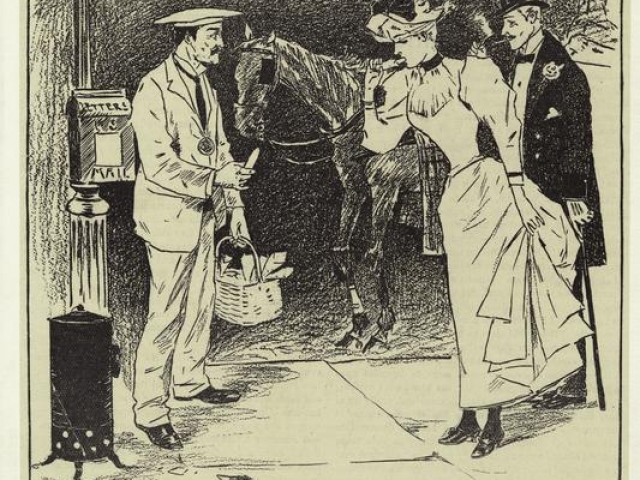 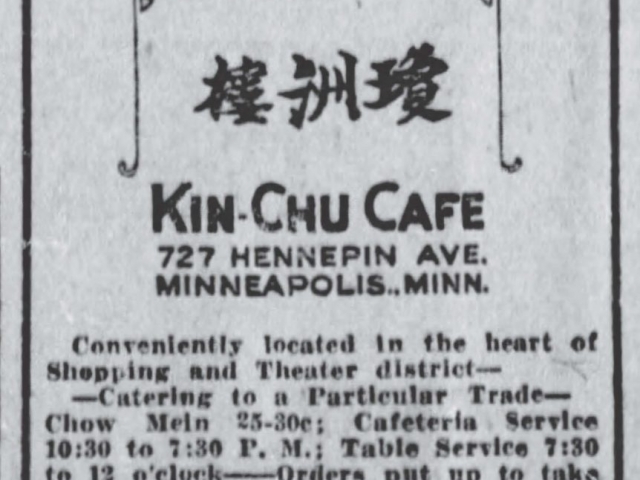 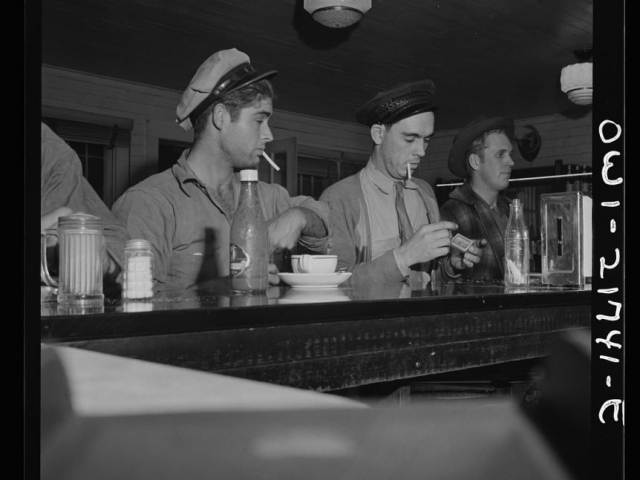 Takeout in the Twenties 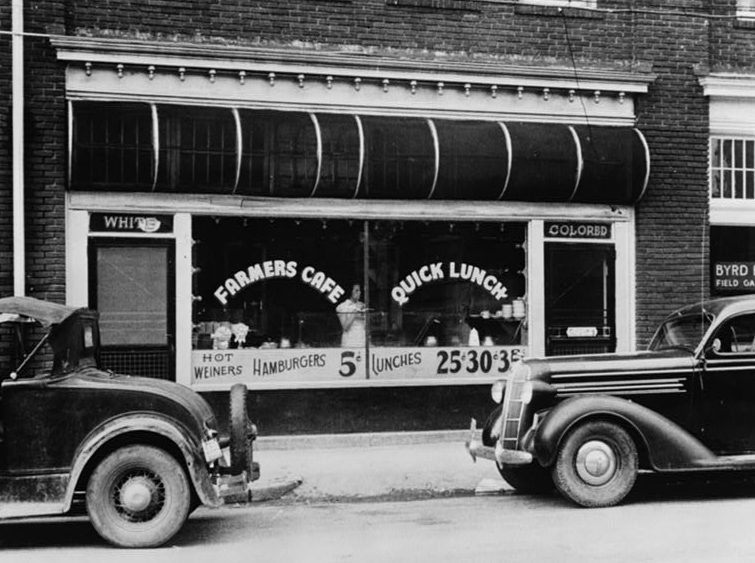 In 1940, this “quick lunch” cafe in Durham, North Carolina required non-white patrons to use a separate entrance. Source: Library of Congress

The 1920s brought the first takeout options. Some restaurants began to selling sandwiches, hot dogs, or burgers meant for picnickers or diners otherwise on the go. Others offered hot meals for patrons to carry home. These restaurants often advertised that food would be packed in special containers for ease of transport, as takeout is today. Chinese restaurants in particular were some of the earliest eateries that offered delivery, establishing the now long-standing tradition of Chinese takeout in the American diet.

While many turned to takeout food for convenience as expendable incomes began to grow, takeout also reflected fraught divides in American society. In the Jim Crow era, segregated restaurants sometimes only allowed white diners to eat inside restaurants, forcing African American patrons to take their food to-go. Unfounded, racist rumors about dirtiness, rodent eating, or laziness persisted around Chinese and Mexican eateries even as these restaurants expanded to match their popularity. While takeout food historically involved exchange among participants of many backgrounds, this exchange did not necessarily signal cultural respect or social acceptance.

Americans on the Move: Postwar Takeout

After World War II, soldiers returning from battlefields in Italy helped popularized Italian food, including pizza, which reportedly was first boxed up for takeout in the 1940s. As early as 1948, In-N-Out Burger opened its first drive-through, allowing customers to purchase food without ever entering the restaurant. And as suburbs expanded and more Americans bought cars, fast food restaurants like McDonald’s and Howard Johnson’s opened locations that catered to cross-country motorists.  As in the 1920s, expanded forms of transportation and rising expendable wealth led to new takeout options which Americans ate both at home and in transit.

Takeout food as we know it grew out of travel, work, and leisure outside the home, as well as the social and cultural interactions that run deep in our national history. Now, it is taking on a new role, giving us a way to connect with the outside world at a time of limited mobility and isolation.