Each Memorial Day, we take time to reflect on the history of this national holiday. Unlike other countries, whose national days of remembrance for military causalities commemorate a specific battle or the formal end of a conflict, Memorial Day in the United States has a much more complicated history. With many cities claiming to be the start of this tradition, it can be difficult to separate fact from fiction. 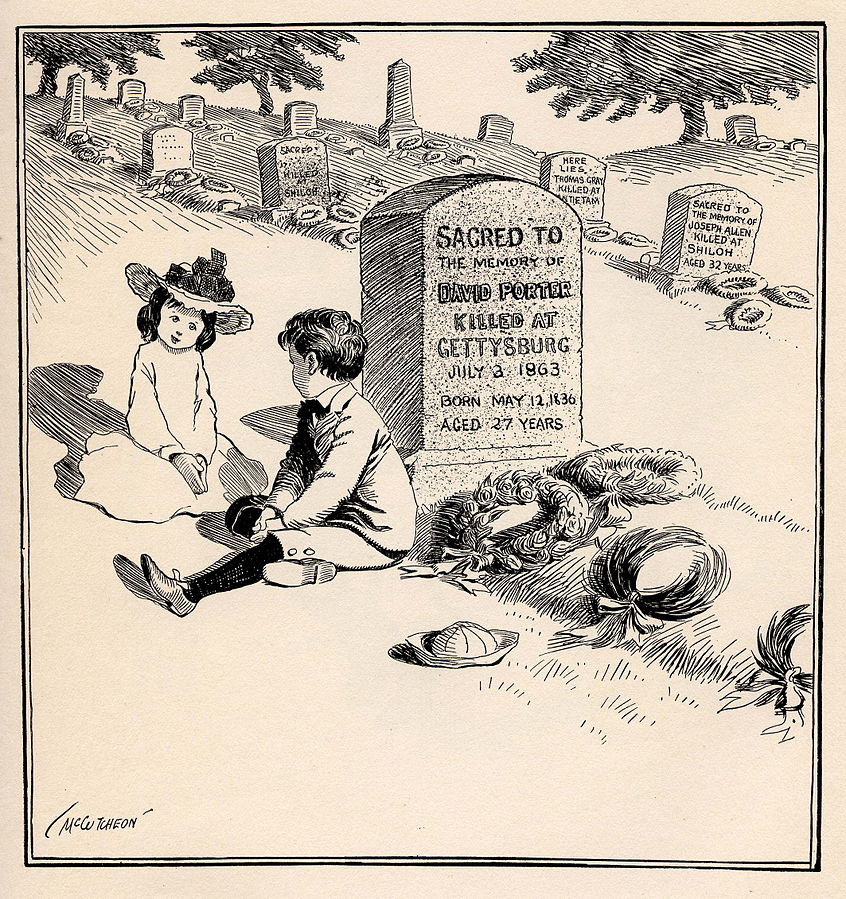 In this illustration, children decorate the grave of a soldier killed at the Battle of Gettysburg in 1863. Source: Wikimedia Commons

Without a doubt, Memorial Day traces its roots to the American Civil War. Throughout four years of bitter conflict, cities and communities in the North and the South hosted local days of mourning and memorial for the fallen, often decorating soldiers’ graves with flowers. One particularly famous instance took place in Charleston, South Carolina, on May 1, 1865. A group of recently freed slaves held a parade of over 10,000 people to mark the reinternment of 257 Union soldiers originally buried in a mass grave at a Confederate prison camp. In April 1866, women in Columbus, Mississippi, decorated the graves of Confederate and Union soldiers as a sign of reconciliation and friendship. Many historians have pointed to this instance as the inspiration for the day, though it post-dates similar ceremonies that took place during the war.

Early commemorative efforts and a growing national desire to honor military dead inspired General John A. Logan to issue a proclamation calling for a national “Decoration Day” in 1868. General Logan served as commander in chief of the Grand Army of the Republic, an organization for Civil War veterans. He suggested May 30th as an annual, national day of observance to honor those fallen in battle. Some historians believe that General Logan chose May 30th specifically, as it held no particular significance to the Union or Confederate causes. Picking a neutral day, as the story goes, could help heal the recently reunited nation. Others argue that General Logan chose a day when spring flowers would be in full bloom, making it easier to decorate a huge number of graves. 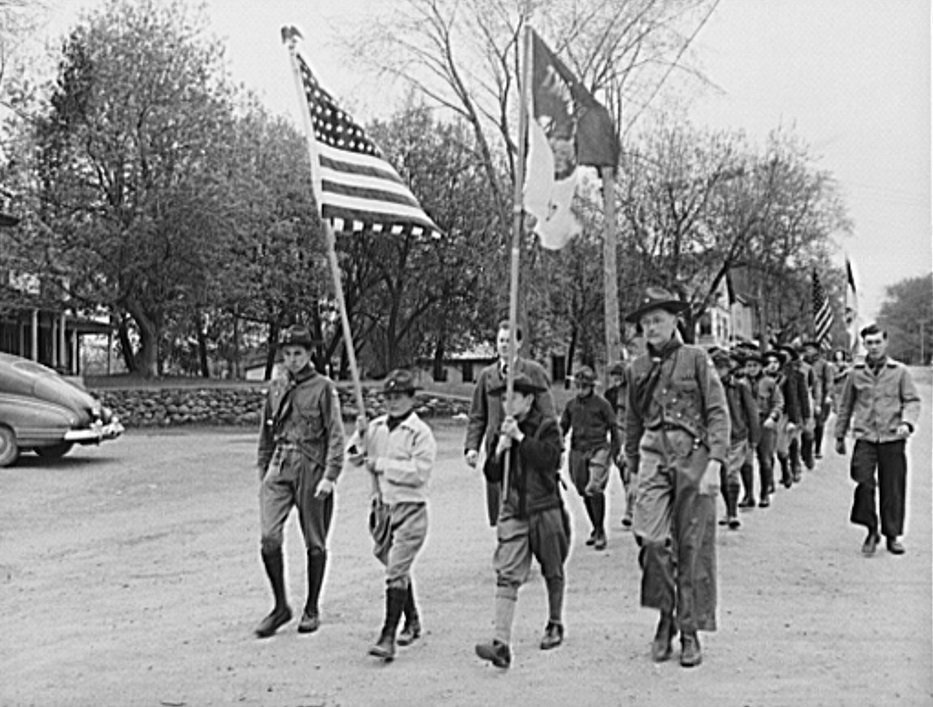 Parades are a common way of celebrating Memorial Day. Doylestown, PA and Grafton, WV claim to have the oldest continually running Memorial Day parades, with one organized every year since 1868. Source: Library of Congress

On this first Decoration Day, former Union general and future President of the United States James Garfield spoke to a group of 5,000 gathered at Arlington National Cemetery to lay flowers on each grave: “We do not know one promise these men made, one pledge they gave, one word they spoke; but we do know they summed up and perfected, by one supreme act, the highest virtues of men and citizens. For love of country they accepted death, and thus resolved all doubts, and made immortal their patriotism and their virtue.”

Despite this national enthusiasm and recognition, Decoration Day was not declared a federal holiday immediately. As such, states and cities practiced their own memorial traditions for decades. After World War I, these disparate traditions began to merge into a unified day of remembrance, honoring the memory of all Americans killed while serving in the Armed Forces, not just those killed in the Civil War. As this tradition spread, the name Decoration Day was gradually replaced with Memorial Day. 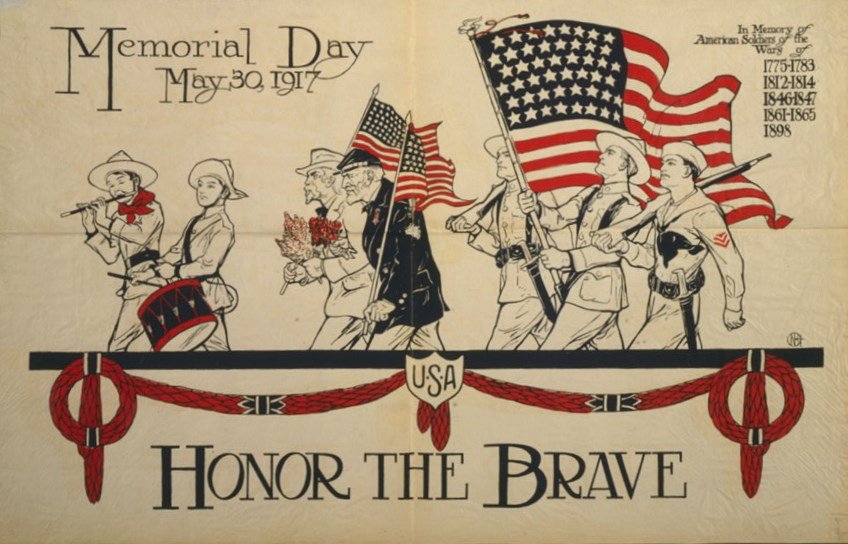 Memorial Day was originally observed on May 30th, no matter what day of the week it fell on. It changed to the last Monday in May in 1968. Source: Library of Congress

Moina Michael was so inspired by John McCrae’s poem that she vowed to wear a poppy in memory of those killed during World War I for the rest of her life. Source: Wikimedia Commons

Even with this name change, flowers remain an important and visible part of Memorial Day traditions. Inspired by John McCrae’s poem In Flanders Fields, where McCrae remarks on the poppies growing between graves of those killed during World War I, American professor Moina Michael began creating silk poppies to sell to raise funds for disabled war veterans. Thanks to her efforts, the poppy was adopted as a symbol of remembrance for war veterans in 1921. Paper versions of these poppies are still sold on Memorial Day and Veteran’s Day by the American Legion to raise money for disabled or hospitalized veterans.

Memorial Day finally became a federal holiday in 1971. When it moved from its traditional observance on May 30th to the last Monday in May in 1968, veterans raised concerns that the public might forget the solemn origins of the day. While the origins of the holiday can be obscured by long weekend celebrations and beautiful spring weather, it’s important that we remember what Memorial Day is truly memorializing.

HAI has had the privilege of contributing to several museums and visitor centers that tell the stories of the fallen, such as the American Battle Monuments Commission’s Normandy American Miltary Cemetery. To learn more, check out the project case study.