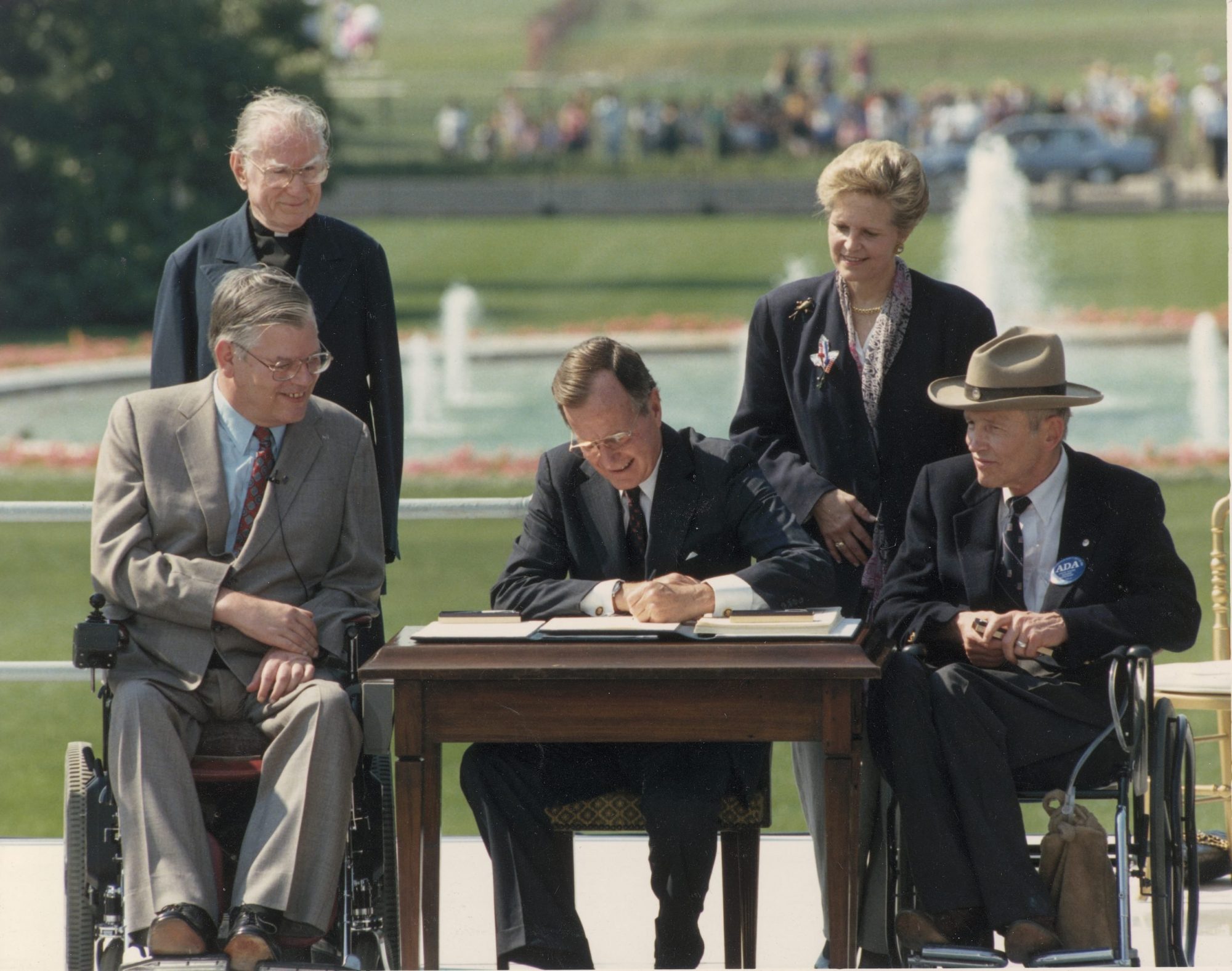 Just weeks ago, the Americans with Disabilities Act (ADA) turned 30 years old. Signed on July 26, 1990, the ADA was a groundbreaking piece of legislation that today impacts 61 million Americans. The Act prohibits discrimination against people with disabilities in all facets of life, including employment, housing, education, and transportation. The ADA defines a person with disabilities as someone with a history of or who is perceived to have “a physical or mental impairment that substantially limits one or more major life activities.” According to Congress, the purpose of the ADA is “to provide a clear and comprehensive national mandate for the elimination of discrimination against individuals with disabilities.” When viewed in the larger historical context, the ADA is much more than an act of Congress—it is the culmination of a community finding and fighting for itself after 200 years of mistreatment and prejudice.

After the Revolutionary War ended in 1783, the nation focused on progress and growth, which required an able-bodied population. At the time, and for decades to come, disability was defined as “the inability to perform economically productive labor.” While this definition could be broadly applied, prejudices at the time associated disability disproportionately with white women, free Black women, and enslaved people. Indeed, the fight for civil rights for all of these groups became intertwined with questions of worth in a society that both valued individual contributions and limited the contributions one could make based on race or gender.

While enslaved people with disabilities were still forced to work or cast out to fend for themselves, a question arose of what to do with everyone else. The wealthy often provided care for disabled family members at home or sent them to “private health resorts,” as in the case of Mark Twain’s daughter Jean. Others attended specialized schools, such as the American Asylum for the Deaf, established in 1817 by Thomas Hopkins Gallaudet. The less fortunate were often sent to the nation’s growing number of institutions and asylums, alongside criminals and the poor. At first, many doctors and nurses implemented a new approach from Europe, the “moral treatment.” Instead of restraining and isolating patients, they focused on humane treatments and mental well-being. As these treatments became expensive, and facilities lost funding and personnel throughout the mid-twentieth century, care for patients devolved. Extreme and often harmful procedures like electroshock therapy and lobotomies became popular at facilities across the country—until lack of funding forced many to close their doors permanently, leaving many patients with nowhere to go. Cast out from these facilities, many people with disabilities that still needed care ended up homeless or incarcerated.

Throughout the twentieth century, prejudice was unleashed outside the institution walls as well, due in part to major population shifts that saw huge numbers of African Americans migrate north and thousands of immigrants arriving on American shores. Politicians, religious leaders, government officials, and intellectuals formed a notion of what the ideal American looked like and attempted to enforce it. Cities established “ugly laws” to keep anyone unsightly off the streets. At Ellis Island, officials kept a sharp eye on incoming immigrants, and denied entrance to anyone with any type of defect that could make them a “likely public charge,” or unable to take care of themselves. At the same time, the pseudoscientific eugenics movement, which sought to promote desirable genetic traits through selective breeding, brought about the rise of forced sterilization. With the Supreme Court’s blessing, doctors carried out around 70,000 forced sterilization procedures during the twentieth century. People with disabilities were deemed unfit to be born, reproduce, work, be educated, or even live in the United States. The eugenics movement eventually spread abroad, where it helped to shape the genocidal policies of the Third Reich. 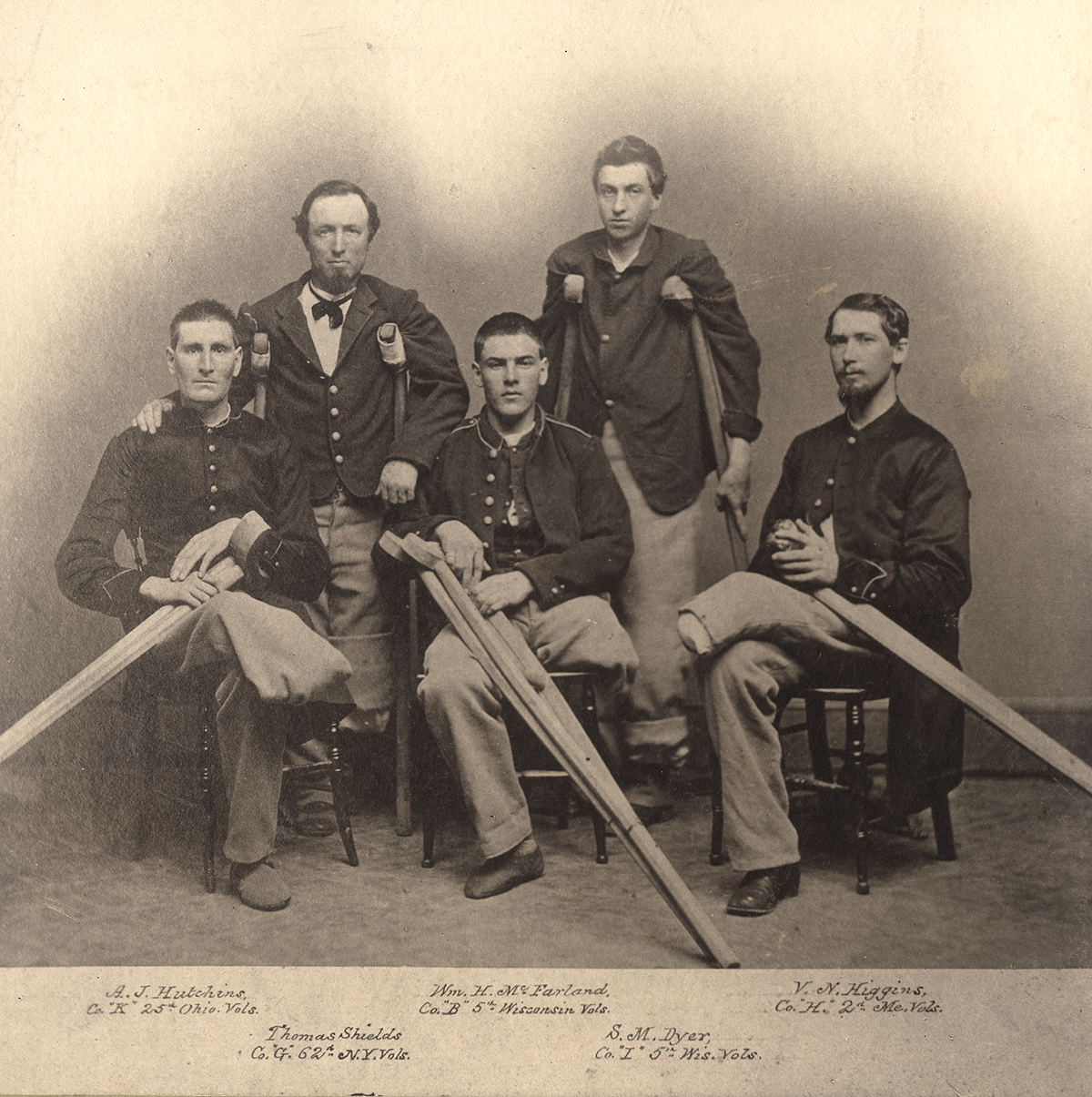 The federal government established the Invalid Corps in 1863 as a way to employ disabled veterans during the war. Assignments depended on the severity of their disability: some soldiers fought, while others worked as nurses or cooks. Source: National Library of Medicine

One group of people that were treated with some respect, however, were disabled war veterans. After the Revolution, soldiers were welcomed home and provided with work. They raised families and led comparably normal lives to able-bodied soldiers. If they could not support their families, the Continental Congress provided a pension to all veterans. As a record number of soldiers fought and sustained permanent wounds in the Civil War, the disabled population grew accordingly. People with disabilities became more visible to the public and inspired new technology such as wheelchairs and prosthetics. State governments even established soldiers’ homes to care for disabled veterans. This new visibility created tension and unease, and the idea of the “deservedly disabled” arose. Disabled veterans of World War I were encouraged to become “successful cripples.” These men had heroically served their country and proven themselves in the trenches: their next battle was to overcome their disability and contribute to society again. 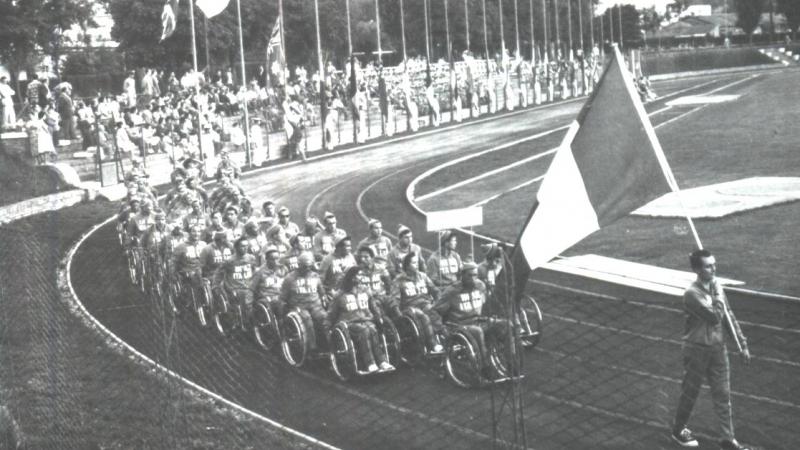 Disabled soldiers returning home from World War II participated in rehabilitative sporting events that led to the first Paralympic Games in 1960, an important milestone for representation and inclusion. Source: Paralympic.org

World War II became the springboard for the future of disability rights. Newly formed disability activist groups began changing the conversation. Paul Strachan of the American Federation of the Physically Handicapped (AFPH), for example, shifted the dialogue of disability rights from a social welfare issue to a labor issue. During the war, as men and women enlisted across the country, people with disabilities began filling vacancies in government and private jobs. Disability employment by the federal government “rose from 28,000 in 1940 to 300,000 in 1945,” and positions that were previously off-limits opened up. These jobs offered a sense of stability and freedom. But they could be hazardous, and not permanent as service members returned home after the war. Organizations like the AFPH worked with the federal government to make working conditions safer, more jobs available, and to expand welfare and Social Security benefits to people with disabilities. According to activists like Strachan, disability was no longer a mental or moral struggle—it was now a question of economic stability and the chance to provide for oneself.

Despite the prevalence of oralism—the idea that deaf people should learn to communicate via lip-reading—the deaf community flourished thanks to a common language, American Sign Language. Source: Utah Deaf History

Polio victims also numbered among the first prominent groups of activists. The shared childhood experience of isolation and confinement in hospital rooms and iron lungs brought them together as adults. As they grew up they realized and understood the inequalities that existed for people with disabilities and began to fight for better treatment and opportunities. Parents also began advocating for their children, ignoring doctor recommendations to institutionalize. Many of these parental groups merged to form the National Association for Retarded Children in 1952, renamed The Arc in 1992. As more groups formed to fight for disability rights, activists started using the language of other civil rights movements: “rights, discrimination, prejudice, and citizenship.” People with disabilities were no longer societal burdens who needed to be cured or hidden away—they deserved basic human rights. 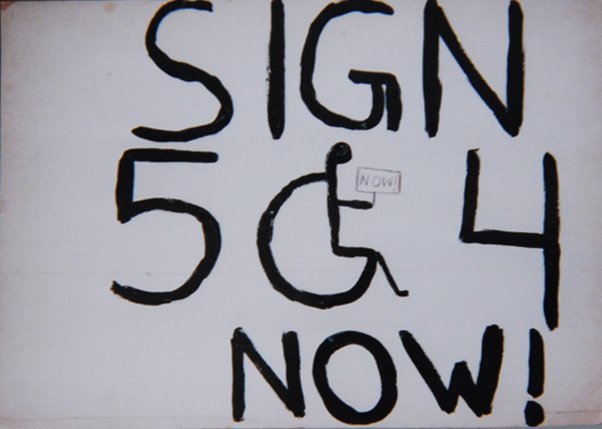 Frustrated that the IDEA bill passed with no enforcement policies, 120 protestors occupied a San Francisco building for 25 days. Aided by the Black Panthers, labor unions, and gay activists, this protest led to the additions of enforcement regulations. Source: Smithsonian

Throughout the 1960s, people with disabilities fought for civil rights and equality alongside Black and LGBTQ activists. Because of their advocacy, they hoped to be included in the Civil Rights Act of 1964 but were not. Another nine years passed before the federal government took any significant legal action on their behalf. Passed in 1973, Section 504 of the Rehabilitation Act prohibited “discrimination on the basis of disability in the programs conducted by federal agencies.” The Individuals with Disabilities Education Act (IDEA) in 1975 guaranteed public education for children with disabilities. This tireless activism culminated in the Americans with Disabilities Act in 1990.

Confrontation with the Past: The Legacy of American Indian Boarding Schools in the United States
Contested Transition: Lincoln’s Victory and the Coming of the Civil War
Straddling the Color Line: The Leland Giants and the Negro Leagues at 100
‘Hurrah, and vote for suffrage!’: The Fight to Ratify the 19th Amendment